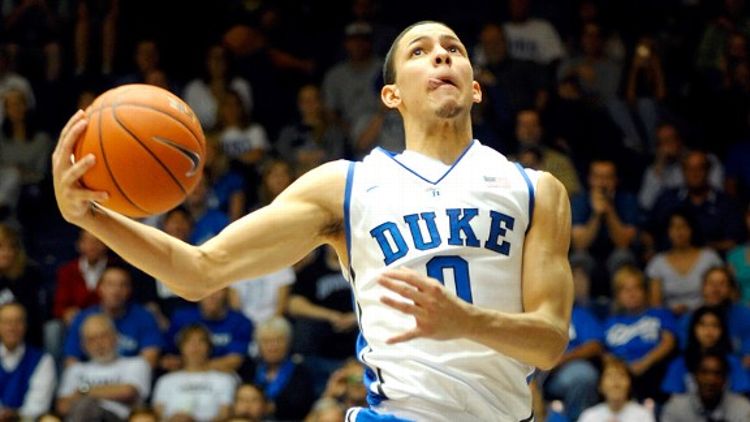 Austin Rivers, ESPN’s no. 3-rated recruit, came to Duke as one of the most hyped freshmen in the school’s storied history. Given his immense profile and his pedigree, Rivers was expected to immediately contribute and fill the holes left by the departures of Nolan Smith and Kyrie Irving. And if you just look at his scoring line, you’d say that Rivers has adjusted nicely, averaging 13.3 points per game. But those numbers don’t tell the whole story — the truth is, Rivers has struggled, especially when it comes to taking the ball to the rack.

Rivers’ 53 points have come on 37 shots and 58 possessions, according to Synergy Sports Technology. He has compiled a points per possession (PPP) rate of 0.879, good for 1,109th in college basketball. PPP is an effective way to judge efficiency because it takes every possession that ends with a shot, assist, or turnover and uses that to evaluate a player’s performance. With stats like field goal percentage, you are only looking at shots attempted and aren’t considering assists or turnovers. A player could have a fantastic field goal percentage, but if he’s turning it over 75 percent of the time, that’s not efficient. Stats like turnover percentage, obviously, do not factor in scoring ability. A player could do a great job of taking care of the basketball, but not shoot it well.

Strangely enough, Rivers’ efficiency suffers when he takes the ball to the rim. The majority of these possessions have come out of isolation and pick-and-roll situations. Given his talents, which include a great first step, strong ball-handling skills, and elite jumping ability, you would think Rivers would be a very strong isolation player. But in those situations, which have made up 29.3 percent of Rivers’ offensive possessions, Rivers is posting a PPP of 0.588, putting him in the bottom 25 percent among all college players. The tape doesn’t lie, either — Rivers is great at creating and getting into space, but he struggles to finish, opting too many times to force up difficult shots in the lane.

In pick-and-roll situations, which make up 44.8 percent of Rivers’ possessions, Rivers is actually playing pretty well, hitting on 68.8 percent of his shots and getting to the line 15.4 percent of the time. Numbers like this usually put you at the top of any efficiency list. Rivers, somehow, only cracks the 82nd percentile. The reason? Turnovers. Rivers is turning the basketball over 23.1 percent of the time when coming off of a ball screen, a rate that has not only hurt his efficiency, but has disrupted Duke’s offensive rhythm.

For the most part, these problems have been a result of bad decisions. It’s early in his career, but Rivers has not yet shown the ability to hit the open man, and oftentimes finds himself in low-percentage one-on-one situations with a bigger defender.

Let’s look at some examples:

We pick up this play with Seth Curry entering the basketball to Rivers on the wing, and then cutting to the corner to give Rivers room to work.

Rivers is able to take advantage of that space by getting by his defender, who was overplaying him toward the baseline. With Rivers attacking and getting himself into the paint, Draymond Green is forced to pay attention to him and at least be in a position to help.

As Rivers picks up his dribble and jump stops, Green makes the mistake of getting a little too deep and losing track of his man, and focusing too much on the basketball. In this situation, Rivers has teammate Ryan Kelly, who is shooting 44.4 percent from three this year, wide open in the corner. Instead of kicking the basketball out to the open man in the corner, Rivers forces up a tough shot that he misses. Here is the play in real time:

Watching this play live, it seems that Rivers predetermined what he was going to do with the basketball before he got into the paint. He wanted to get into the lane and get the shot off, no matter what the defense was doing. Rivers needs to be a little more aware in these situations, reacting to the defense reacting to him, and hitting the open man.

On this play, Rivers gets the dribble handoff and gets a ball-screen in the flow of Duke’s transition offense.

Rivers is able to use the screen effectively, making a great hesitation move to get by Belmont’s big who was hedging over on him. Getting by the hedge man means there is a lot of space in the top half of the paint. Rivers is quick enough and smart enough to get into that space with the basketball.

This forces a third defender to step up and provide help, and once again forces Rivers into a decision. He has two possible options: He can pull up for a jumper off of the dribble in the paint or he can dump it off to an open teammate in the paint. Instead of trusting his jumper and pulling up in the paint off of the dribble, Rivers jumps out at and into the helping defender, leading to a charge. Here is the play in real time:

By all accounts, Rivers has a fantastic pull-up jumper, but for whatever reason he hasn’t been willing to show it off yet at Duke. In fact, Rivers has taken just four jump shots inside 17 feet all season, or one per game. It’s great that Rivers is attacking the rim aggressively, drawing fouls on 17.2 percent of his possessions, but there needs to be a balance between aggression and smart play-making, and Rivers, like most freshmen, hasn’t quite figured out how to adjust to the college game.

One thing that I have been hearing is that Rivers just needs to get used to the speed of things. While that might be the case in certain situations, I don’t know if it has to do with Rivers’ decision-making, which has been iffy even during his high school performances:

Is this to say that Rivers is a bust and a terrible player? No. To make any sweeping generalizations about a player after four games would be silly. In fact, there are some signs that should comfort Duke fans. First, Rivers’ ability to get to the free throw line has been fantastic. He’s getting there close to 20 percent of his possessions, and he has shown great ball-handling skills, getting himself in the paint and putting himself in positions to get fouled. Secondly, there is an adjustment period, and while I don’t know if it is bothering his decision-making, it definitely is hurting his ability to finish in traffic. Here’s an example:

Here, Rivers makes a nice move and gets to the front of the rim. Despite getting to the rim, he misses the layup attempt and it looks like the size/speed of Michigan State’s big men bother him a little bit. Once Rivers gets used to the speed of rotations and used to the length of defenders, I fully expect him to return to his old form when finishing at the rim:

If Rivers starts to make the correct passes and starts using his pull-up jumper, he will live up to all the hype. His turnover rate will drop. Defenses will be forced into more decisions, which will open up the floor to hesitation dribbles, crossovers, and drives to the basket. All the tools are there for Rivers — he just needs to figure out how to make the decisions that maximize his considerable talents.