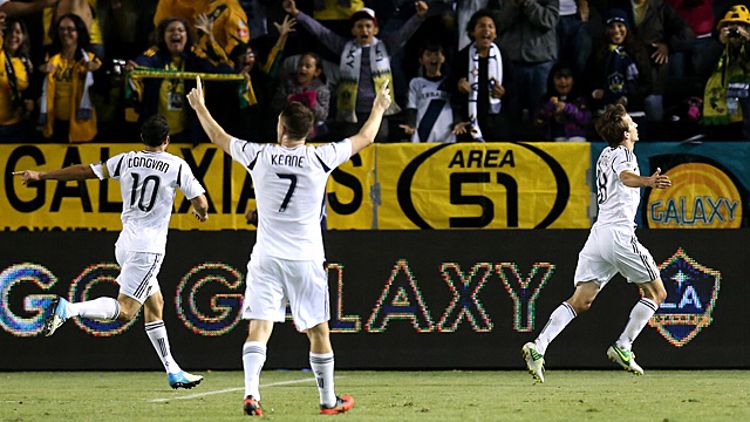 What’s my relationship status with MLS? It’s complicated. I’d like to tell you that ever since I became a supporter of the league, when it kicked off in 1996, I’ve remained loyal to it. But I haven’t. And many American soccer fans probably have a similar story. For me, it’s been hard to stay devoted to the league when you (a) don’t have a hometown team to support (I’m from Michigan), and (b) know that a better on-the-field product exists in England, Spain, Italy, Germany, etc.

But my feelings for MLS began to change last year when I moved to Los Angeles, where there are not one but two clubs to follow: the L.A. Galaxy and Chivas USA. While keeping up with the flashy and successful Galaxy and the rather feckless Goats, my love for the league has been rekindled.

Now, all meaningful relationships will have their day of reckoning. And I believe that for conflicted MLS fan like me, it has arrived: the L.A. Galaxy will play the Houston Dynamo in the MLS Cup this Saturday, and the match holds such potential for greatness, and whether you’re an MLS monogamist or just keeping it casual, I believe we all must witness it. Here’s why:

1. Two Top Teams Are Playing for the Title

Saturday’s game is a rematch of the 2011 MLS Cup (which the Galaxy won 1-0, on the back of a goal by Landon Donovan), and over the past seven seasons, the Galaxy and Dynamo have combined to be the two best teams in the league. Houston won the ’06 and ’07 Cups, while the Galaxy — after enduring a slump in ’07 and ’08 (perhaps not coincidentally David Beckham’s first two seasons with the club) — are appearing in their third Cup in four years.

Although the two teams entered the 2012 postseason as two of the lowest seeds in the playoffs — L.A. was fourth out of five in the West, Houston fifth in the East — they’ve rightly earned their spot in the MLS Cup. Each side won its first-round knockout game (a new wrinkle for the MLS, because this league’s playoffs, like David Beckham’s hair, have an all-new look every season) and beat the no. 1 seed in their respective conferences (the Galaxy downed the San Jose Earthquakes, Houston took out Sporting Kansas City) before winning their conference championships.

2. Legacies Are on the Line

Saturday’s match might be Landon Donovan’s last professional game. For the past six months, and as recently as last week, he’s been talking to reporters about his possible retirement. Donovan has taken criticism throughout his career for not plying his trade in Europe and challenging himself at the elite club level. But in turn he’s dedicated himself to MLS. He’s played for only two clubs — San Jose and Los Angeles — and won four MLS Cups. If he’s going to hang up his boots, he’d love to do it by going out on top of the league where he’s spent almost all of his professional career.

Also, in case you haven’t heard, the MLS Cup will be David Beckham’s last game with the Galaxy — and if what he says is true, in MLS. Yes, Beckham has helped the league’s growth during his five-and-a-half years with L.A., but his time in MLS has also been marred by turbulence — missing Galaxy games to chase his 100th cap with England, his affair with A.C. Milan, kicking a ball at an injured player, and shoving a mascot. Winning back-to-back MLS championships with Los Angeles would at least end his playing career with the Galaxy on a high note.

On the coaching front, Bruce Arena, the GM and head coach of the Galaxy, is going for his second pair of back-to-back MLS Cup titles (the first came with D.C. United in ’96 and ’97, the league’s first two years). Dynamo head coach Dominica Kinnear is trying to cement this Houston club, which he’s coached since its first season in 2006 as an expansion team, as one of the best in the league’s history. Three MLS Cups in seven seasons would likely do that.

3. The Possibility for a Wide Open Match

Houston’s attack is led by captain and central midfielder Brad Davis, and second-year striker Will Bruin, who has four goals in the playoffs. Houston won their playoff matches by taking early leads (they’ve scored first — and in the first half — of all but one of their five playoff games) then shutting their opponents down. But Houston hasn’t faced an attack like the one L.A. boasts. Designated Players Donovan, Robbie Keane, and (in a supporting role) Beckham lead a team that has scored nine goals in five playoff matches. If the Dynamo get an early goal, the Galaxy will attack with abandon to equalize, and the match could turn into a wide-open affair.

After playing together for a season-and-a-half, these two guys have developed a beautiful partnership. The two of them, each on the downside of their respective careers, have found in the other a perfect strike partner. Each has the ability to find the open spaces in a defense, but it’s the way their abilities complement one another that makes them so dangerous in tandem. Donovan’s speed, his ability to make long, penetrating runs with the ball at his feet, pairs perfectly with Keane’s uncanny goal-scoring sense and his immaculate first touch, which is so soft and caressing it could cradle a sleeping baby. These two fillet defenses. Just check out this goal against San Jose in the conference semifinals:

5. Because You Just Never Know …

I truly believe something exciting will happen Saturday. All the elements are there: the rematch of the ’11 cup; underdog vs. overwhelming favorite; Beckham’s — and maybe Donovan’s — last game. Who’s to say what the moment might be? Maybe Becks will seal his MLS legacy with one of those epic free kicks that made him world-famous. Maybe Donovan will find an open space in the defense and score yet another crucial goal in a career that’s been full of them. Maybe a 19-year-old kid from Inglewood named Jose Villareal will score the game-winner. Maybe the underdog Dynamo will pull off an upset of their flashy, high-profile step-brothers. Fun little off-the-field story: Anschutz Entertainment Group (AEG) owns the Galaxy and a portion of the Dynamo, and the MLS Cup itself is called the Philip F. Anschutz Trophy.