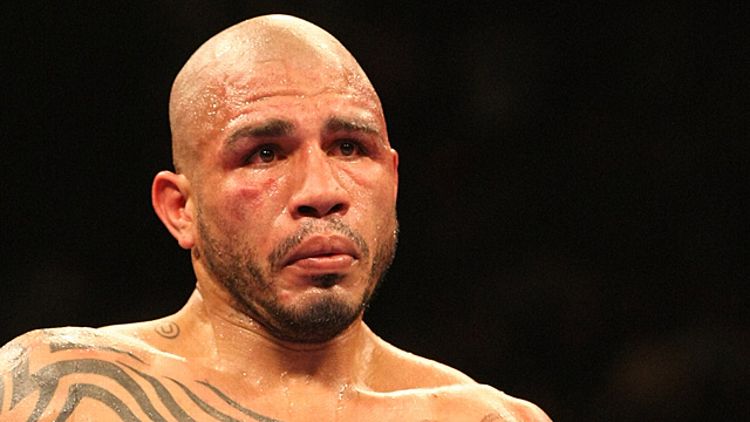 But for both Camacho and Savage, the “Macho” nickname came with some irony. Savage was a star in a fake combat sport, and in his heyday, his heel gimmick included putting his female manager in harm’s way to spare himself. Camacho squeezed out a 30-year career in boxing by developing perhaps the least macho in-ring style among high-profile fighters of his era.

It’s all relative, of course. In boxing, the bar for “macho” is set unreasonably high. And it’s set there because of fighters like Miguel Cotto. Seven days after Camacho’s death, his Puerto Rican countryman Cotto will step into the ring at Madison Square Garden (the Spanish-Harlem-raised Camacho fought there 15 times). Cotto is as earnestly macho as they come. Even Camacho himself wouldn’t deny that he was a showman first and a rare talent who left a sizable slice of that talent untapped, unlike the hard-earned, authentic “macho” of Cotto.

Cotto’s fight Saturday will illuminate the differences between his style and Camacho’s. Cotto is, like Camacho, a Puerto Rican boxing icon capable of drawing passionate crowds in New York. But he has not followed in Camacho’s footsteps to achieve that status. He’s gotten there by being, in some ways, the anti-Camacho.

The boxing media’s reaction to Camacho’s death has been one of tempered tribute. Much attention has been paid, and rightfully so, to Camacho’s charisma. Veteran east coast boxing broadcaster Dave Bontempo painted him in a playful light: “He had this way about him of being honest and blunt without going over the line and being too offensive.” Some might disagree about that last part; see this interview in which Camacho oozed charm and personality until dropping a random N-bomb. But this is how it works. When a public figure dies, we acknowledge the negative and we accentuate the positive. (And then inevitably someone puts together a YouTube tribute video set to that damned Goo Goo Dolls song.)

With Cotto, there isn’t much negative to worry about. No drug charges, no child-abuse accusations, no jail time for grand theft auto. He’s the walking embodiment of stoicism. It’s hard to imagine any other fighter remaining as calm and professional as Cotto did when all the circumstantial evidence piled up suggesting that Antonio Margarito beat him with loaded handwraps. Cotto got his revenge against Margarito one year ago at the Garden, and it was a dish served cold because that’s how Cotto serves all his dishes.

Cotto is Camacho’s polar opposite in terms of personality type. But his relative introversion hasn’t hurt him at the box office. Cotto is the third most bankable pay-per-view fighter in America, behind only Floyd Mayweather and Manny Pacquiao. And that’s largely a product of his fighting style. You don’t have to talk a big game when you entertain between the bells like Cotto does. It’s a cliché to say someone has never been in a boring fight, but it’s damned near true with Cotto. You have to go back to 2002, his 12th pro bout, against John Brown, to find an exception.

Cotto has world-class boxing skills and elite punching power, but he’s always been somewhat handcuffed by pedestrian speed. That’s one area in which he wishes he was more like Camacho. In the early ’80s, “Macho” was a marvel in the ring, a speed demon making his case for the top of the pound-for-pound list at ages 22, 23, 24.

Where Camacho and Cotto diverge dramatically is in the directions they took after being badly hurt by an opponent for the first time. It was at MSG in June 1986 that Camacho’s flight instinct kicked in. Heavy-handed Edwin Rosario rocked him in both the fifth and 11th rounds, and though Camacho held on for a split-decision win, he was never the same in the ring. He became a defense-first fighter. “When I make love to my girlfriend, she boos me,” Camacho once quipped. He ran, mugged, and pot-shotted his way to a lengthy and lucrative career as the marketable antagonist to the biggest stars of his time. He defeated Ray Mancini and Sugar Ray Leonard when they were past their primes, but got battered by Julio Cesar Chavez, Felix Trinidad, and Oscar De La Hoya.

In 2005, Cotto was exposed as defensively deficient and perhaps a bit chinny against little-known Colombian puncher Ricardo Torres, getting dropped hard in the second round and dazed badly again in the fifth before pulling out a seventh-round knockout victory. But Cotto didn’t alter his style after his scare against Torres. He remained willing to gamble, to stand in the pocket and take shots to land shots. For that, he was rewarded with larger and larger paychecks and sellout crowds at the Garden. Like Camacho, he consistently came up short against the absolute superstars, suffering a final-round TKO against Pacquiao and dropping a close decision to Mayweather.

For all the contrasts in their personalities and fighting styles, one thing Camacho had in common with Cotto was a willingness to fight anyone. Camacho faced six different men who are or will be in the International Boxing Hall of Fame. (And he never suffered a knockout loss. In fact, he was only knocked down twice in his whole career.) Cotto, too, has stepped up to every daunting challenge. And what makes Cotto truly macho is his willingness to take on the risk/reward-inappropriate opponents who typically have trouble scoring opportunities. We’re talking about guys like Torres, Carlos Maussa, and Carlos Quintana (all of whom were undefeated when Cotto faced them). We’re talking about guys like Margarito and Joshua Clottey.

Trout is 25-0, a southpaw, ostensibly in his prime at age 27, and completely anonymous to anyone outside boxing’s hardcore circle. There was no public outcry for Cotto to man up and face Trout. Some will say Cotto chose him because Trout has an alphabet belt, but the same is true of 39-year-old former Contender star Cornelius “K9” Bundrage. Cotto chose Trout because throughout his career, he hasn’t dwelled on complex risk/reward calculations before choosing his opponents. By and large, Cotto has fought the best fighters available.

Camacho was the same. For all of his personal shortcomings, for as difficult as he became to watch later in his career, he accepted challenges and, for better and for worse, he was one of boxing’s all-time great survivors.

Unfortunately, even a great survivor can only survive so much.

Outside the ring, Camacho was reckless to a fault. You might say Cotto is the same way inside the ring. Fight fans are in mourning over Camacho, trying their hardest to focus on the good times. With Cotto, no such effort is required.