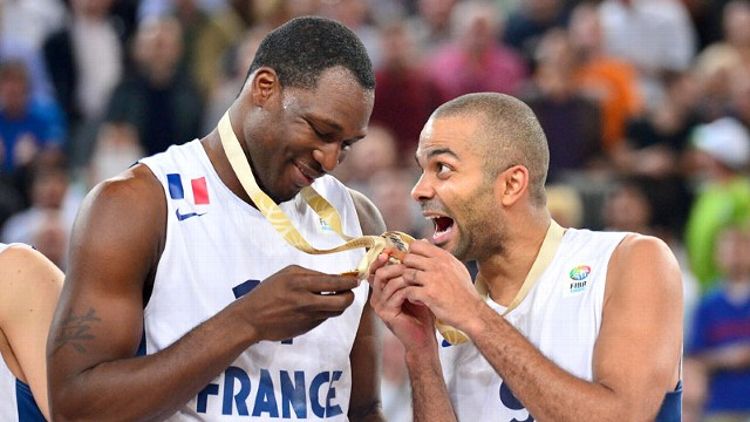 I can’t imagine what it must feel like to be Tony Parker today.

Actually, I think I can — I’ve fallen victim to several bottomless mimosa specials the morning after Friday/Saturday benders. What I really can’t imagine is the inhumane amounts of champagne that must’ve been consumed by the French men’s national basketball team in Ljubljana, Slovenia, last night after France earned its first gold medal at FIBA Eurobasket 2013.

It’s been a long time coming for Parker. He’s competed in every one of FIBA’s European championships since 2001. He was only 19 then, still months away from logging his first minutes as a Spur, and years away from the undisputed claim to being the best basketball player France has ever produced. By the following Eurobasket in 2003, so much had changed. He became an NBA champion and a vital component to the Spurs’ decade of consistent excellence.

Eurobasket is held biennially on odd years. It’s interesting to note that more than half of the ones Parker has participated in have followed a Finals run by San Antonio — four of the seven (2003, 2005, 2007, 2013), to be exact. In those years, he’s played an average of 98 NBA games. Tack on an additional eight games on average from Eurobasket competition, not to mention the weeks and months of national team practice, and it’s almost understandable how some regard Parker as an aging star inching toward a decrepit state when he really only turned 31 in May.

If you’ve watched Parker at any point in the last 10 years, nothing he did at Eurobasket should come as a surprise. He tiptoed around screens and spun and slithered his way around defenders for easy baskets. He managed to keep a low profile in some games and completely dominate the ball in others. With so many years of NBA and international competition flowing into one another, Parker’s consistency makes a whole lot of sense.

Parker is now second in all-time Eurobasket points scored with 996. He supplanted Dirk Nowitzki after his remarkable 32-point performance in France’s semifinal upset over Spain, the tournament favorites. The only man above him is Nikos Galis, one of Seton Hall’s finest who went on to become a European legend as a member of the Greek national team after being cut by the Boston Celtics in training camp before the 1979-80 season. Red Auerbach called that the biggest mistake of his career. Galis scored 1,030 points in Eurobasket competition. If Parker returns in 2015, he’ll eclipse that record with ease.

Anyway, it’s been more than three months since the Spurs were dispirited by the Heat after seven incredible games. Those wounds don’t heal so quickly, and will surely remain affixed to the team long after the season starts at the end of next month. For guys like Tim Duncan and Manu Ginobili, two godheads in the franchise, their crucial errors committed in the final two games will sting for a lifetime. The same can be said for Parker.

Just not today. I’m not sure how much of that sting registers when it feels like a jackhammer is going to town on the side of your head. Hope your hypothetical horrible champagne headache goes away soon, Tony. Until then … Congrats!