28 Days Later: The Clippers’ Other Guys 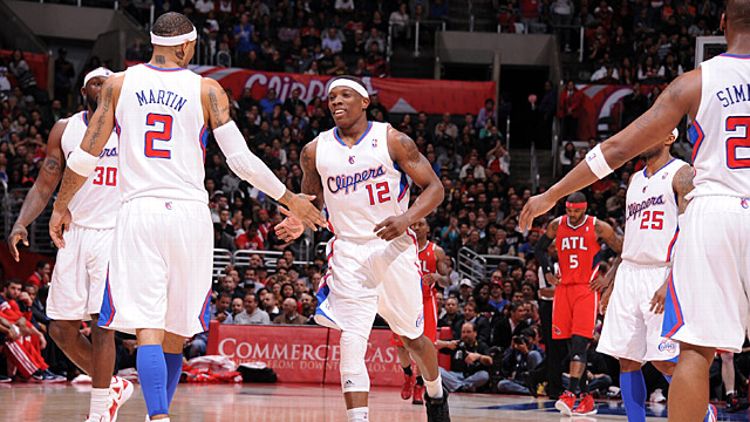 The thought came about halfway through the first quarter last night. The Clippers had hit their first six shots, and after another massive DeAndre Jordan dunk made it 17-8, Atlanta was forced to call timeout. For those six minutes, Chris Paul and his bunch were the Clippers that people had imagined when the season began. It was high-flying, shot-making, thrill-inducing basketball, and all I could think as both teams moved to their benches was that somehow, some way, I’d become bored with the most entertaining team in the NBA.

It’s not the Clippers’ fault. If anything, they’ve been too much fun. Once you’ve seen Blake Griffin do a spin move in transition and dunk on a guy’s head for the 10th time, it loses a little something. After 20 or so games, and amid 28 games in 28 days, exposure and novelty start working against one another. With about two minutes left in the quarter, just when I had resigned myself to a fate of being desensitized to dunks, the Bench Squad rode in with their white headbands.

The Clippers bench has involved its share of guys this year. Early on, Brian Cook saw some time. Ryan Gomes has been in and out of the rotation. Before Chauncey Billups went down for the season, Randy Foye was a main contributor. The mainstay, among all the changes (and the one who again set the tone last night) has been Mo Williams. In a game where Blake Griffin scored just 12 points, Williams led the Clippers with 25 in their 96-82 win. As Jay Caspian Kang said yesterday in analyzing Monta Ellis, a guy who can come in and take over a game from the bench can be an overlooked asset, and this season, almost no one has filled that role better than Williams.

What made this game different for the Clippers reserves was the continuity among the second team. Eric Bledsoe has battled injuries and trade rumors for much of the season, but last night, he fit both visually and athletically into the no. 2 unit. Often distinguishable by a badass flattop haircut, Bledsoe joined in the white headband look with Williams, Reggie Evans, and Kenyon Martin.

“Mo told me to wear it,” Bledsoe said. “I do whatever the vets tell me to do.”

“Bench Squad,” Williams said. “We’ve got everybody in the headbands, except Bobby [Simmons]. I’m working on Bobby now. He’s not a headband guy, but I’ll work my magic. It won’t be long.”

It comes off as a joke, but from what Bledsoe and others said after the game to what took place on the court, it was evident that there was a singular mind-set among that group last night. Williams provided the normal spark offensively, but it was the intensity on the other end of the court that stood out.

With about seven and a half minutes remaining in the fourth quarter, following a Williams 3 to put his team up nine, the Clips picked up full-court. Tracy McGrady, who was inbounding the ball for Atlanta, saw Bledsoe roaming around the free throw line and attempted a deep pass to near half court. Like a cornerback, Bledsoe swiveled his hips, placed his man, turned to the ball and made a play on it in the air. After a Williams missed jumper, Evans collected the rebound, went up strong with his left hand and got the basket plus the foul. It was the loudest cheer of the night. The “Reggie! Reggie!” chants began. Bledsoe pumped his fist as he played to the crowd. There was nothing boring about this.

At one point in the fourth quarter, Vinny Del Negro sent Chris Paul to check in before calling him back. There was no need. The bench had this one. On the eve of the trade deadline, Bledsoe had his best game of the season — 14 points and four steals in 17 minutes — and afterward, he couldn’t help but smile when asked about it. The location of his basketball future might be in question, but its promise shouldn’t be. The 22-year-old claimed afterward that he’d never played a down of football, but that doesn’t mean he can’t. Bledsoe is built like a running back and runs like one too. Last night, he said, was a glimpse of where he wants to be. He still isn’t all the way back from the surgery in October to repair his torn meniscus.

Bledsoe is the specimen and Williams is the spark, but Wednesday night, as it’s been since he arrived, Evans was the motor of the Clippers reserves. It’s taken less than half the season for him to become the most popular man at Staples Center during Clippers home games, and unlike other bench favorites around the league, the love is rooted in performance. Evans brings a relentlessness to the floor that has tinged the Clips’ second unit, while averaging almost 13 rebounds per 36 minutes. Oh, and he wears a headband.

“You can’t do the same thing that the first unit does,” Evans said. “You’ve got to have your own identity, and that’s what we’re trying to do — set our own identity, being aggressive, in-your-face, full-court, nonstop.”

Remember How You Liked VCU?