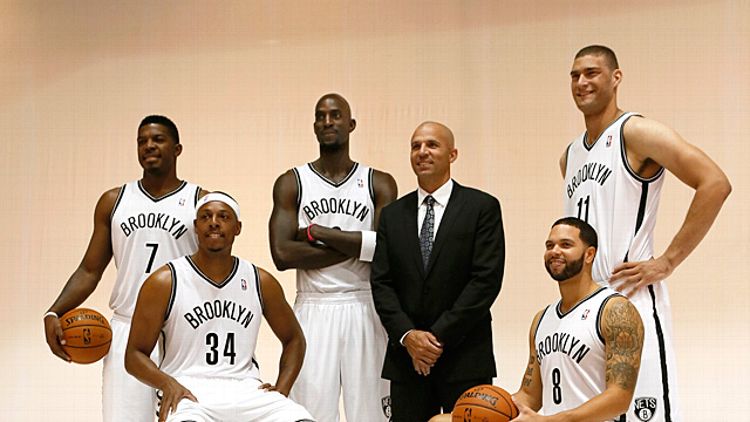 Imagine you’re at a party. It’s a pretty midsize affair; there are enough people — say 20 — that you can legit call it a party, but it’s not like it’s raging. You know these people and you like them, but you’re ultimately a little bored with them.

Then some guy wearing streetwear that hasn’t been cool since 2009 comes storming in, carrying a case of Grey Goose and a bag of mixers, and announces that everyone is eating pizza for free. He screams, “WE IN THIS BITCH.” This guy is an idiot, but you are charmed and intrigued because at least he’s new.

This guy is the Brooklyn Nets.

Yesterday, the Nets had their media day at Barclays Center before jetting down to Duke University to get their training camp under way. Of course the Nets are holding training camp at Duke. The Nets are not subtle. They dropped a giant, rust-colored monstrosity in the middle of the busiest intersection in Brooklyn, they hired a future Hall of Famer to be their coach, they traded for a division rival’s two most iconic players, and when they get cold they warm their hands by burning copies of the NBA’s salary cap rules. Is your team mired in player contract hell? Sorry to hear that. Do they play in a decrepit old arena that’s more suited for minor league hockey than professional basketball? Those are the breaks. Does your owner not know how to Jet Ski? Tough.

The Nets are the bad guys. That’s why they are training at Duke. Game recognize game. And you know what? For as much I loathe the thought of spending a Wednesday night in December actually watching these guys play, sitting through possession after possession of Paul Pierce or Joe Johnson dribble into oblivion, I kind of like that they are fully embracing their identity.

I like that they are trolling the Knicks. I love that Paul Pierce went on New York sports radio and said “Everybody knows how much I disliked the Knicks when I was with the Celtics, but I think it’s grown to another level. I think it’s time for the Nets to start running this city.” I love that Andray Blatche thinks the Nets are the best team in the NBA; I think it’s kind of awesome that Pierce spent media day talking about how little he cares about winning the Atlantic Division: “I came here to win a championship. I don’t even want to see an Atlantic banner put up if we win it.”

They very well may win the Atlantic, and Pierce very well may not be there to see them put it up. He’s in the last year of his deal, and you’d have to imagine KG is in the last year of his career. And that’s the other reason I’m kind of into this team: With most of the NBA seemingly punting and building for the future, the Nets are brazenly, ridiculously all-in on right now. And after years of the Miami superfriends, and the plucky upstarts in Chicago and Indiana, I’m kind of glad to have some new company.

At least it’ll make for a good party.