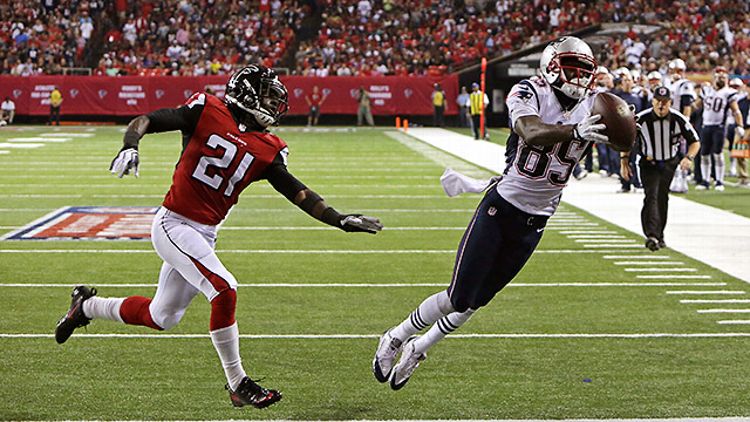 As it stands now, the Tom Brady–Peyton Manning rivalry feels like a colossally rigged episode of Chopped. While Manning has received an assortment of first-rate ingredients with which to cook, Brady is forced to make chicken salad out of a spare tire, some stones, a rabid gerbil, and Rob Gronkowski’s bloodied forearm cast. This sucks for Brady, of course, but it makes for some incredibly entertaining television, especially when Brady single-handedly elevates that chicken shit into something passably gourmet. Sunday night in Atlanta was one of those times.

Needless to say, this was a major improvement over the Week 2 shit-show in New York, which had Brady longing for 2007.

Brady spent the ensuing week vowing to improve his body language and breathlessly praising the receivers he’d berated just days earlier. If you’ve ever wondered what the most disingenuous compliment in the history of the universe was, look no further than Brady’s September 16 interview with WEEI radio: “The younger players are doing a great job. They’re working really hard. Their attitude is great. It’s been fun to work with them.” This is more or less exactly what LeBron said about his teammates when he was on the Cavs.

But maybe the tough love worked. In Week 3, against Tampa’s outstanding pass defense, Kenbrell Thompkins scored twice, Aaron Dobson and Julian Edelman hauled in seven receptions apiece, and even Michael Hoomanawanui got in on the action. Of course, flukes happen all the time, and smart owners weren’t convinced that Thompkins and Dobson in particular merited anything more than a roster spot. But then Gronk and Danny Amendola missed another game, providing Edelman, Thompkins, Dobson, et al., with one more chance to shine. Master chef that he is, Brady used them in perfect harmony to the tune of 316 yards, making Sunday a banner night for chicken shit.

A tribute seems in order. What follows is one man’s testament to Brady’s unsurpassed greatness, a game we won’t soon forget, and some very deficient ingredients who refused to give up on themselves.

• Kenbrell Thompkins: Sometimes Thompkins appears to have fly swatters instead of hands. His drops aren’t merely drops; they generally look like inexplicable attempts to bat away the ball. Al Michaels mentioned during the telecast that Thompkins reminded Brady of Chad Johnson, and considering Ocho’s ignominious season with the Patriots, that might not have been a compliment.

However, Thompkins was ninth among receivers with 19 fantasy points in Week 4 and seems to have gained Brady’s everlasting trust. Case in point: This 49-yard reception, in which a flustered Brady heaved the ball downfield into double coverage, fully expecting Thompkins to make the grab. Despite Gronk’s and Amendola’s imminent returns, Brady will continue to target Thompkins, because he’s the closest thing to a deep threat the Patriots have. If Thompkins somehow remains available in your league, buy buy buy. In addition to leadership, Thompkins will bring invaluable wisdom to your team.

Message to society: Mistakes are being made everyday, learn from each one and find a plan how not to make the same ones twice!

She twerks! RT @Tuckyargh: @KTdaWinner what do you think of miley cyrus?

• Aaron Dobson: Dobson, a 2013 second-rounder from Marshall, was originally expected to start opposite Amendola and run nothing but fly patterns. Then Thompkins seized Dobson’s job, relegating Dobson to fantasy no-man’s-land. I’m not ready to write him off completely, but Dobson’s value is largely contingent upon Amendola and Gronk being injured. Unless Dobson usurps Thompkins on the depth chart, bury him on your bench.

• Julian Edelman: Edelman’s seven receptions, 79 yards, and two touchdowns in Week 1 were a surprise to folks who thought Zach Sudfeld would see most of Brady’s short, middle-of-the-field targets. While Sudfeld would prove to be a sad, sad excuse for a substitute Gronk, the actual Gronk will significantly limit Edelman’s production as soon as his dad grants him permission to play. Ditch Edelman in a deal while he’s still posting WR2 numbers.

• Zach Sudfeld: He’s available in 98 percent of ESPN.com leagues! Come one, come all! Wait, what? Your league doesn’t dole out massive points for botching onside kick recoveries? Oh. In that case, perhaps the similarly unskilled Matthew Mulligan floats your boat.

• Michael Hoomanawanui: His jersey makes for a tremendous gag gift, folks, and Christmas is right around the corner.

• Stevan Ridley/LeGarrette Blount/Brandon Bolden: I take back everything I’ve ever said about St. Louis’s trio of Daryl Richardson, Isaiah Pead, and Zac Stacy. They are much, much less infuriating than New England’s terrible troika, because this is a legitimate three-way split.

Ridley clearly remains the top option, but Blount will continue to poach carries. Though Blount’s 47-yard touchdown skews the numbers a bit, he ran powerfully and impressively down the stretch in Atlanta, cementing Ridley as little more than a low-end RB2/high-end flex going forward. Bolden exists to make us miserable, but then again, we might actually be lucky. Once Shane Vereen returns in Week 11, this may very well become the murkiest running back situation of all time.

In which we commemorate the week’s most elite fantasy performances with some phenomenally prestigious honors.

1. If You Have Enough Super Glue and Duct Tape, I’ll Lead You to a Fantasy Title.

C.J. Spiller has been a monumental disappointment this season, to put it lightly. Fred Jackson has outscored Spiller by 25 fantasy points on 18 fewer carries, and more alarmingly, Spiller has now suffered knee and ankle injuries in back-to-back weeks, lending credence to the concerns some folks had about his ability to handle a full workload. Back in August, Bills offensive coordinator Nathaniel Hackett promised to give Spiller the ball “until he throws up,” so maybe Spiller is puking up a storm behind closed doors.

While Spiller plans to play in Cleveland on Thursday night, avoid starting him if at all possible — the Browns have allowed a league-low 2.9 yards per carry, and as of yesterday, Spiller couldn’t “walk normally.” The only positive here is that if he sits Thursday, Spiller will get three extra days of rest before the Bengals come to town in Week 6.

Is it possible that the collective idiocy of Todd Haley and Romeo Crennel is mostly to blame for Matt Cassel’s sorry tenure with the Chiefs, and that the QB can perform adequately when given a competent coaching staff and solid playmakers? I wouldn’t doubt it. Cassel brought back memories of 2008 this Sunday in London, and he augments the fantasy value of everyone around him, especially Jerome Simpson and Greg Jennings.

Wait. Hold that thought. Leslie Frazier is sticking with Christian Ponder, which I guess is a smart decision if Frazier is trying to get fired. The Vikings are on a bye this week, so there’s time for the coach to change his mind, but for now it looks like Jennings and Simpson’s combined 33 fantasy points were a one-week mirage.

3. So Sorry, But Mike Shanahan Will Not Abide a One-Man Show.

At least there’s hope for Spiller if he can manage to stay healthy. Alfred Morris, on the other hand, has been exceedingly average and figures to remain that way for the entire season. I couldn’t convince a PPR leaguemate to give me Giovani Bernard for Morris, and that was before Morris sustained a rib contusion in Sunday’s win over the Raiders.

In Morris’s stead, Roy Helu gained 41 yards on 13 carries, including a 14-yard touchdown. Though this equates to a perfectly mediocre 3.2 yards per carry, Shanahan spoke glowingly of Helu after the game, potentially foreshadowing a future time-share. Morris’s value isn’t very high right now, but it’s going to plunge further in the coming weeks.

After scoring 45 fantasy points in three weeks, Joique Bell took a backseat to a healthy Reggie Bush, leaving no doubt as to who is Detroit’s best running back. Bell is once again who we thought he was: an OK PPR flex, but nothing more. Carry on with your life.

It wasn’t all doom and gloom in the world of Bells, however. Despite a pedestrian 57 yards on 16 carries, Le’Veon Bell tallied 19 fantasy points in his debut with the Steelers. Look, you’re probably a better football player than Felix Jones, Jonathan Dwyer, and Isaac Redman, so Bell is unquestionably Pittsburgh’s workhorse. His ample red-zone opportunities make him a solid RB2, and eerily similar to a vintage Tatum or Mike Bell.

Unlike Eddie Royal, Danny Woodhead has steadily improved this season and figures to maintain his upward trajectory. He won’t score two touchdowns every week, of course, but he’s enough of a mismatch for opposing linebackers to remain relevant in the Chargers’ passing game. Since I view this community as a support group for suffering fantasy owners, I’ll straight-up admit that I drafted Woodhead in my PPR league and regrettably dropped him in the preseason … to make room for Bryce Brown. Please leave your condolences in the comments.

2. TE Coby Fleener, Indianapolis Colts (79.6 percent). Don’t start Fleener this week; the Seahawks are coming to Indy, and his performance will mirror the measly two receptions for 13 yards he posted in San Francisco. Nevertheless, he’s a great long-term option with Dwayne Allen on injured reserve. The fact that Fleener gets to play the Jaguars again should be enough of a selling point.

4. WR Justin Blackmon, Jacksonville Jaguars (86.4 percent). Blackmon’s suspension is over, he’s “in a great frame of mind,” and Gus Bradley has got to bench Blaine Gabbert sooner or later. This investment might not pay off immediately, but Blackmon’s upside is too great to ignore.

I Suck at Football 2.4: White People! Stop Looking for Ghosts!