I Suck at Football 2.4: White People! Stop Looking for Ghosts! 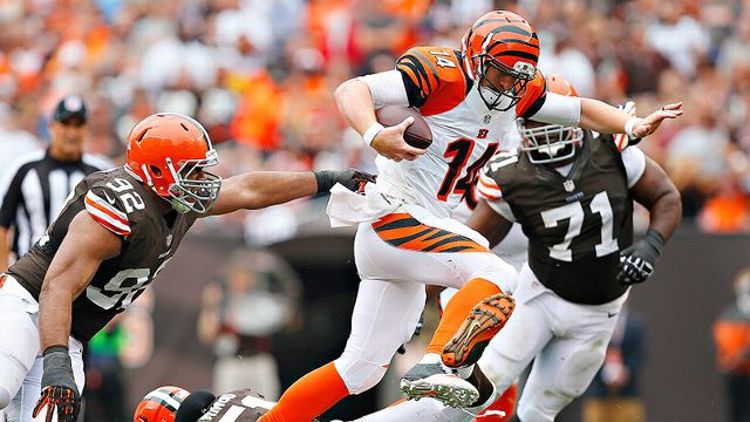 I’ve been to Las Vegas four or five times. It’s always for work, which means I always go by myself. Public service announcement: Don’t do this. There’s being alone, and then there’s solitude, which is aloneness plus contemplation. It’s useful aloneness. You find out who you are. Vegas doesn’t permit contemplation. Vegas is a machine designed to blast the quiet out of your brain. Vegas aloneness is aloneness stripped of all its spiritually nutritional value. I can stand it for about 36 hours. I can tell myself, as the plane touches down, that I’m somehow going to do it right this time, that I will engage with what Vegas has to offer without letting the town’s ambient despair and desperation infect me. But in the end the house always wins.

This time I stay in a businessmanish hotel by the convention center. No gambling. No bar. No room service, even. Crop the Wynn out of the background of the shot and this could be Virginia. The first night I stay in and write. I’m doing it right. And then the second night I go out. The mental program I’m using to hack Vegas this time — my “system,” as it were — is that I’m going to think like an old man. I’m somebody’s dad now, and I’m going to do Vegas like somebody’s dad might. Like a business traveler. The kids can keep their molly and their Tiësto oontz-oontz clubs. I’m going to the Flamingo to see George Wallace.

Maybe you only know Wallace from his Twitter feed, a Horse_ebooks-ish barrage of surreal non sequiturs (“Shout out to grappling hooks, helpin’ people get on roofs who might not otherwise be able to do so”) and equally surreal name-drops (“Shout out to Jay Mohr for always being in the know.”) But he’s a real person. He’s a 61-year-old observational comic and the longest-running African American headliner in Vegas history. He has billboards up all around town, proclaiming himself “The New Mr. Vegas.” This seems like a pretty unambiguous attack on Wayne “Mr. Las Vegas” Newton’s title, but Wallace has been quoted as saying that it’s all good. He believes Mr. Las Vegas and The New Mr. Vegas can coexist, that the town is big enough.

Seriously, go see George Wallace. You should definitely go if you’re an active-duty military serviceperson, or a college student, or a first responder, because if you’re any of those things your ticket-buying dollar is no good at the George Wallace show, but you should go even if you have to pay. The show feels simultaneously as comfortably canned as Campbell’s soup and intriguingly free of any evident internal logic. Sometimes he tells jokes, sometimes he just starts listing the good barbecue restaurants in different American cities. There’s a great one in Germantown in Philly, apparently.

He spends a lot of time asking people where they’re from. Wallace knows there are only so many places in the world for people to be from, and he’s got a joke or a factoid for every major city. New Orleans? “NEW ORLEANS,” Wallace booms, and then thanks the guys from New Orleans for visiting Vegas and gambling “that FEMA money.” Wilmington? Ah, yes, Delaware, the only state in the union without its own airport. You could probably tell George Wallace you were in from Narnia and he’d do 15 minutes on talking lions.

It’s 2013 and Wallace is still doing jokes about Brokeback Mountain and Emeril and how he can’t pronounce “Bosnia-Herzegovina.” But even his new jokes, like the one about Paula Deen and the N-word (“Don’t use it! I stopped using it last Tuesday!”) feel like old jokes. He has some really biting topical material about vichyssoise (“Nothing cold is soup to me”) and Ethiopian restaurants, still inherently hilarious to George Wallace after all these years.

At some point near the one-hour mark the show takes a churchly turn. Wallace does a joke about the gospel standard “He Touched Me,” starts to sing it. The blond goateed non-drinking guy and his wife seated at the table next to mine begin to sing along, in earnest, angelic voices. “We’re having church in the casino,” Wallace says. “We breaking some rules tonight!” And it’s pretty obvious that we’re not breaking any rules, that the Flamingo couldn’t care less and Wallace has probably done this every night for a decade, but the energy level does kick up a notch. Wallace beckons any pastors and ministers in the crowd to join him at the front of the house, gives them a hard time while Andrae Crouch’s “Let the Church Say Amen” plays.

It feels like the show’s climax but it’s actually just the middle. At about 11:15 Wallace says he has to go, and begins giving out parting gifts — copies of his newest CD, Large & in Charge, Kangol-style I BE THINKIN’ caps like the one Wallace wears onstage, gift certificates to Hash House a Go Go. The show doesn’t actually end for at least another half-hour. First he talks about how he’s running for president — that’s why he’s standing in front of a podium with the presidential seal on it.

He does jokes about “new diseases” like “lactose intolerance” and “compulsive shopping.” He breaks into a Bernie Mac impression and then shows a slide of Bernie Mac that says “Goodnight and Godspeed” underneath it, even though Bernie Mac died in 2008 and has presumably already made it to wherever you go after you die. He shows a picture of himself with a grinning, sepulchral Dick Clark, who came to see the George Wallace show just a week or so before he passed away. He does a joke about how he’s LeBron James’s real father and one about the proliferation of ghost-hunting reality shows, whose punch line is just him saying, “WHITE PEOPLE! STOP LOOKING FOR GHOSTS!”

Finally, he thanks everybody for coming to see the black man instead of the Blue Man. Then he stands directly outside the theater and sells merchandise. $100 will get you two DVDs, two CDs, two T-shirts, and two keychains that say “I LOVE YOU AND THERE’S NOTHING YOU CAN DO ABOUT IT.” By the time the show ends I’ve been ready to leave for about 45 minutes. Looking back, it’s the highlight of my weekend.

Sunday morning, I’m in my hotel lobby, waiting for a taxi, watching the pregame show for the Vikings/Steelers game. This epic battle between two 0-3 NFL teams is special in that it’s taking place on the field at Wembley Stadium. American football, live from Old Smoke! Phil Simms notes that football has grown in popularity in England in the years the NFL’s been coming here. Jim Nantz says yes, it has grown in popularity, but also in “excitement.” So there was a time when it was popular but no one was excited about it? Like J. Cole? I decide to wait outside.

Nearly every service-industry person you talk to in Vegas seems to have foolhardy sums of money riding on sporting events at all times. The bellhop who stores my bag at Caesars Palace tells me he bet big on the Bengals in their important intra-Ohio clash with Cleveland. “We’ll probably disappoint you,” I say. The bellhop says he’s not sure I’m right. He says the Browns had something to prove after Trent Richardson got traded, but they beat the Vikings last week, so now they don’t. Serious question: When did everyone in the world start thinking about sports in terms of narrative and character motivation, as if these were not athletes but professional storytellers? “Something to prove” is a meaningless abstraction. From a distance, football always seemed arcane and higher-mathematical to me, but the closer I get to it the more I realize how much of the thinking around it is purely magical.

Anyway: It’s a pretty representatively bleak and terrible day of Bengals football. I have no proof that Andy Dalton and the Bengals’ offensive line got themselves in a headspace for today’s game by listening to Songs of Love and Hate in an underheated basement, but what unfolds on the field is absolutely a Leonard Cohen song in football-game form. Cleveland’s up 7-0 by the time I find a seat in Caesars Palace’s fabled sportsbook, which turns out to be a crowded and NORAD-like place to watch commercials for this week’s apparently pivotal NCIS episode, which will be Ziva’s last. Oh, man. Ziva’s leaving? She was my favorite member of the National Crime Intervention Society. Her, or Spreckels. Or Garibaldi. The show’s never been the same after Ray-Ray left — real talk.

Chris Owens sacks Andy Dalton and the Browns recover the fumble. I hear a woman’s voice say “Garbeege.” I nod in agreement. I look up. She’s holding a carpet sweeper, wearing a Caesars vest, inquiring about my empty Starbucks cup. But she’s right. Garbeege. The worst part is there’s a really exciting football game going on just a few screens away. Texans-Seahawks! That 45-yard field goal! J.J. Watt, bleeding like a martyred saint!

Seattle, down by 17, manages to pull it out, and as this starts to happen something about all the joy radiating from the other side of the room tips me over into total alienation. Sooner or later Vegas tears your psychic defenses down. I’ve had nothing stronger than Pike Place Roast today and I feel like I’m on bad drugs. Somebody lights up a cigar that smells like Oscar Madison’s deathbed. I stumble in the direction of the Bacchanal Buffet. I will give you what you want, Vegas. I will become a collection of shameful appetites in a bag of skin.

As I cross the lobby everything starts to look sinister, fish-eye-lensed. A father-son team with matching Gallagher skullets and short-sleeve plaid dress shirts, holding zippered leather briefcases. A line of five-foot-tallish women in chauffeur caps and diamond-encrusted unitard-bustiers, marching two by two, clapping in unison, on their way to deal blackjack in the Pussycat Dolls–branded gambling node off the main casino floor.

When I get to the buffet there’s a hundred people ahead of me. There was a shorter wait for the last chopper out of Saigon. So I find the food court, and my level. No, pizza-counter lady, I would not like these two meat lover’s slices heated up. I want to get the sadness into my body as efficiently as possible. Every meat lover’s pizza is also a self-loather’s pizza. I sit and eat room-temperature pizza while Adele belts out “Rolling in the Deep” on an overhead speaker. Call it: September 29, 2013, is the lowest point of my life.

In a minute or two the Browns will score again, widening their lead over the Bengals, at the exact same moment the Seahawks tie it up, just to really drive home the fact that I’ve chosen the wrong team. On my way back to the sportsbook I stop and witness one of those weird moments of human abjection you can count on Vegas to serve up every five or 10 minutes. A woman sits with her head in her hands at an otherwise unoccupied video blackjack machine, the kind where you play facing a life-size CGI dealer-avatar on a big plasma screen. Usually the dealer is a busty woman, but right now it’s a handsome guy in a tuxedo who looks vaguely like Jason Mesnick from The Bachelor.

I can’t help it. I stop and stare at the woman to see if she’s crying. The dealer-robot nods impassively to players who aren’t there. Suddenly he makes eye contact with me and holds it for an eerily long time. Vegas, baby. It stares back into you.