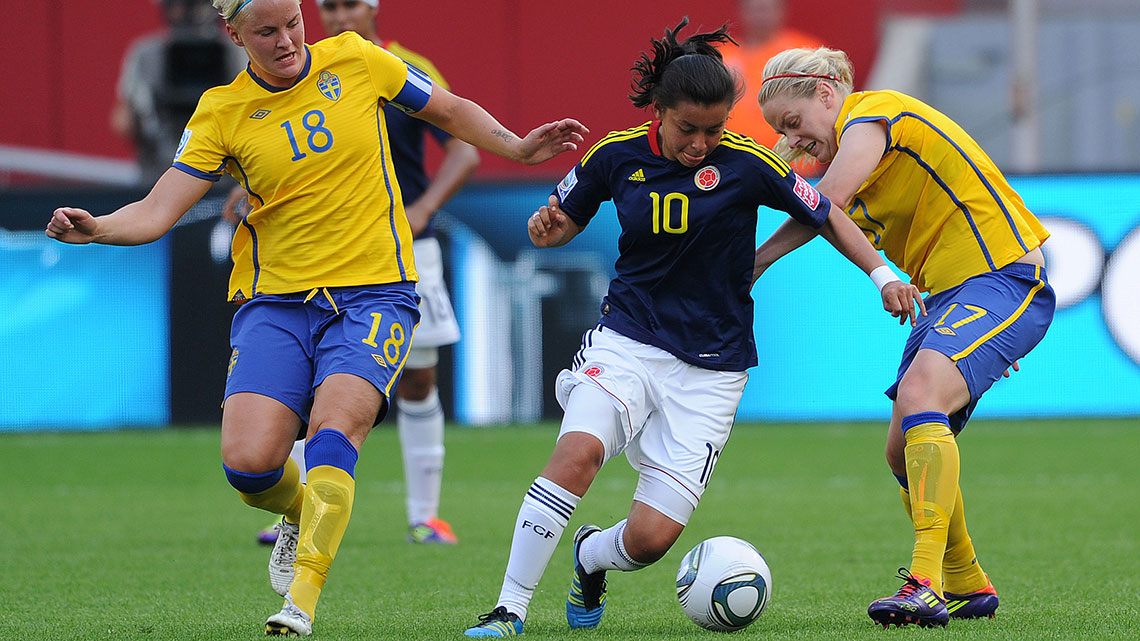 Since she was a teenager, people have been calling Colombia’s Yoreli Rincón “the next Marta,” despite the two having little in common beyond being born on the same continent. It all began at the 2010 U20 Women’s World Cup with this beautiful bomb in Colombia’s 2-0 win over Sweden in the quarterfinals:

After that, the Marta comparisons started rolling in — and Rincón, who is a center midfielder and not a striker like the famous Brazilian, did nothing to stop them: “She’s nearly 10 years older than me and won the [World Player of the Year Award] for the first time at the age of 20,” Rincón told FIFA after the 2010 tournament. “I’m 17 right now so I’ve still got a bit of time left. That’s my goal: I want to win it at an earlier age than she did.”

Of course, that never happened, and we haven’t seen much of Rincón in the five years since.

After the goal against Sweden, Rincón was included in Colombia’s senior team for its first World Cup, where she wore the vaunted no. 10 shirt and started the first game of the tournament — only to come on as a substitute in the second game and not even make the game-day roster for the final group-stage match. At the 2012 Olympics, Colombian coach Ricardo Rozo claimed that Rincón was unfit and hardly played her at all.

Her club career has been similarly frustrating.  Since 2012, Rincón changed teams three times, scored just one goal in an entire season, and briefly spent time in the W-League, the second tier of women’s (kind of) professional soccer in the U.S. In 2013, she departed for LdB Malmo of the Damallsvenskan in Sweden — Ramona Bachmann’s club — but she only started twice in 12 appearances and scored one goal. At the end of the season, she was let go by the club for financial reasons. Ironically — or maybe not — Malmo (now Rosengard) signed Marta soon after Rincón left.

Over the last decade, Marta’s won the FIFA World Player of the Year award five times — two more than any other player. During an unparalleled four-season run with Umea in Sweden from 2004 to 2008, she scored 111 goals in 103 games. And to compare her to anyone, let alone a teenage Colombian midfielder, doesn’t make much sense. She dances with the ball in that typical Brazilian style — quick touch, quick touch, pause — but her tiny frame’s always perfectly balanced so that she can finish at any given moment. It’s that combination of speed, footwork, and goal-scoring that separates Marta from everyone else:

That goal came during the 2007 World Cup, when Marta was 21 — the same age as Rincón now. The Brazilian had already won her first World Player of the Year award, so she came into the tournament with high expectations, which she met, leading the tournament in goals and winning the Golden Ball.

Eight years later, what makes Rincón so exciting coming into the 2015 World Cup is that, as a player, she still remains relatively unknown. We know about the initial misguided Marta comparisons, we know she’s good on the ball, and we know her right foot can launch rockets, but outside of a few appearances at the World Cup and the Olympics, we really haven’t been able to see her play. In 2014, though, we began to get glimpses of the Rincón that Colombia has been dreaming about for five years. During the 2014 Copa America Femenina tournament in September, she was named the player of the tournament and scored three goals, including this deadly set piece against Peru:

Come June, Las Chicas Superpoderosas will not have an easy run through Group F, which also features two very strong European teams, France and England, and a much more experienced Mexican side. To advance from the group stage, Colombia is going to need Rincón and several others to play out of their minds — and to do so without resorting to sucker punching opponents in the face. Who knows if this World Cup will provide another breakout Colombian star, but it won’t feature the “next Marta.” Hopefully, this summer we’ll finally find out who Rincón really is.