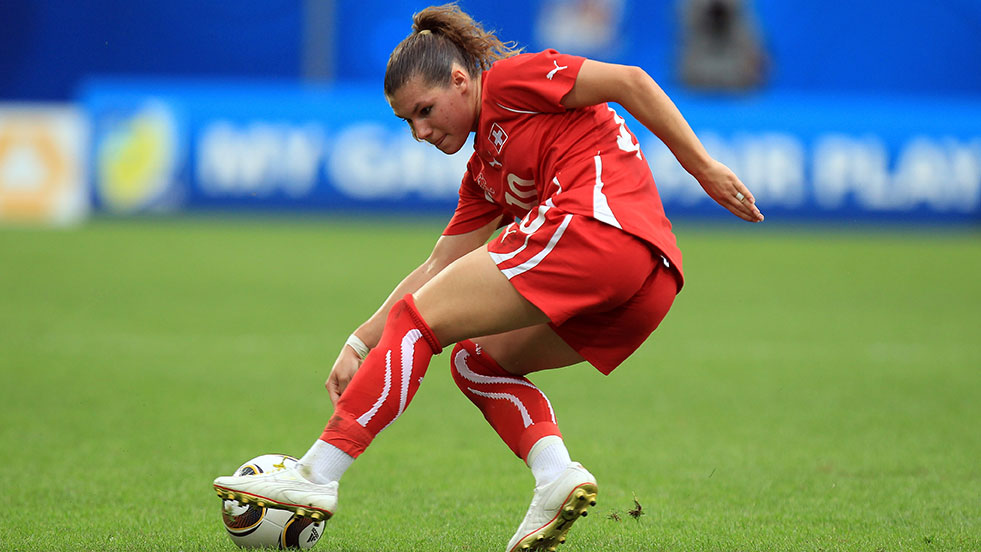 Just like we did last year for the men’s tournament, we’ll be highlighting all of our favorite players in the lead-up to this summer’s women’s World Cup. With the Algarve Cup, an annual early March invitational, kicking off in Portugal, today seemed like a good time to start.

Ramona Bachmann really wanted to go to the World Cup in 2011. With her Swiss side down 2-0 in the 41st minute in a qualifier against England, she pushed past the last defender and, with almost no angle, somehow slipped the ball low into the opposite-side netting.

Bachmann had just scored a beautiful goal — and then, after brushing up against England’s visibly pissed keeper, Rachel Brown, she did this:

That, friends, is some next-level flopping: Not only does Bachmann fall to the ground, clutching her face after scoring a goal, she does it when no one’s even playing.

Brown was immediately red-carded, but even with Bachmann’s effective theatrics, the Swiss still lost 3-2 and ultimately didn’t qualify for the World Cup. For her high jinks, Bachmann was roundly criticized in the women’s soccer community, which, according to some, prides itself on “upholding the honor of honest competition.” Brown’s red card was eventually rescinded by FIFA, and Bachmann was made to apologize:

My emotions and myself had gone out of complete control for some seconds. I cannot turn back the time, I cannot make up for what has happened. All I can do is asking to accept my apologies.

This apology rules. In other words, Bachmann wanted to win so badly that she blacked out because of emotion overload. In her desire-crazed mind, maybe there was a powerful death ray or a shot from a strategically placed Royal Air Force regiment sniper that left her crumbled in agony.

If you don’t get that, you don’t want to win badly enough. And if she doesn’t seem contrite enough for your tastes, then that’s too bad. Four years later, Bachmann and the Swiss have qualified for their first World Cup; she’s not going away anytime soon.

Bachmann, now 24, has been playing professionally since she was 16, making stops in Germany, Sweden, and (very briefly) with (now-defunct) Women’s Professional Soccer in the U.S. before returning to Sweden to join FC Rosengard (formerly Malmo) in the Damallsvenskan, Sweden’s highest division. The young striker has been compared to Marta, which is essentially the same thing as likening someone to Pelé, and now the two play together at Rosengard, forming a deadly attack for a team that’s well-poised to win this year’s UEFA Women’s Champions League if they can get past defending champion Wolfsburg in two weeks. Bachmann sits fourth among scorers with 11 domestic goals, and she’s been nominated for Swedish player of the year, an award she won in 2011.

I don’t need to draw comparisons between male and female soccer players to get you to care about Bachmann — she’s spectacular — but she reminds me so much of her Swiss compatriot Xherdan Shaqiri of Inter Milan that I briefly wondered if the two might be related. She’s stout but still fast as hell, bulldozing through two, three, or four defenders as the ball moves seamlessly between either foot:

She’s incredible on the dribble, charging forward with equal parts feistiness and creativity, but my favorite Bachmann moments are when she combines with other players for quick one-and-two-touch passes. (Yes, this GIF is sped up, but she’s still moving SO MUCH FASTER than anyone else.)

Worried that she’ll slice through your aggressive defense? Fine, give her a bit of space — and then this will happen:

Bachmann was named the Swiss female footballer of the year as a 19-year-old and has 32 goals in 59 caps with her national side. While La Nati will be taking their maiden voyage to the World Cup this summer, Bachmann makes them a dark-horse contender for a deep run. She’s working with half the talent that fills out teams like France or Germany, but don’t be surprised if we see some crazy shit from the Swiss Magician come June — taking on five players, ripping 30-yard shots, and maybe even another facedown self-tackle. As Rachel Brown found out: Whatever it takes to win.