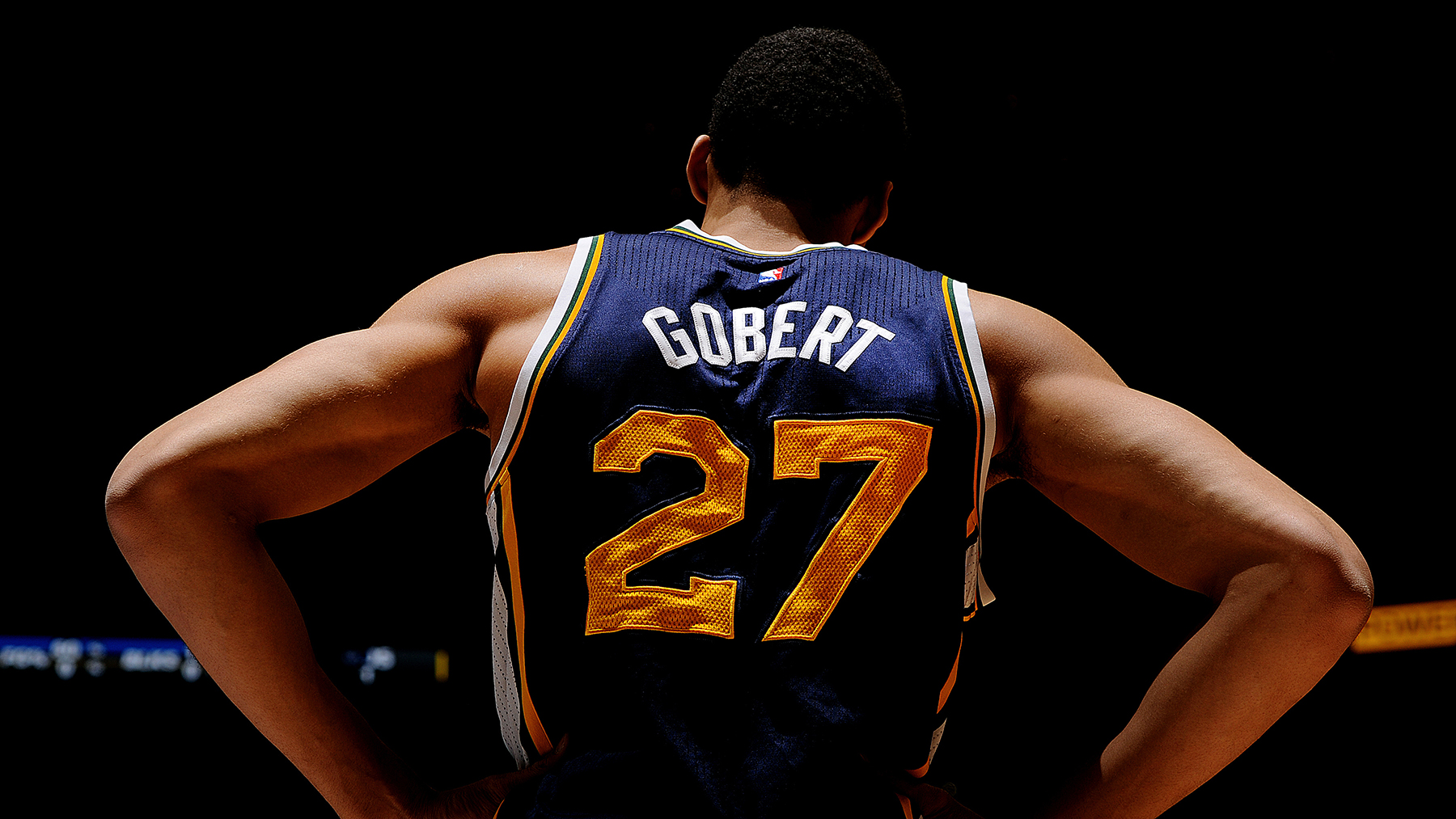 Last Monday in Utah, Tim Duncan was attempting his 10 millionth career face-up move from the left wing. He took three right-handed dribbles into the middle of the paint before spinning back toward the baseline and rising for his patented bank shot. But the league’s most dominant young defender was there to make sure Duncan’s attempt would never even glance off the backboard.

Something’s brewing in Utah. Since the team dealt Enes Kanter on deadline day, the Jazz have won five of six games and suddenly have the look of a team that has figured something out. That something is defense.

Jazz opponents have looked hapless on the offensive end. Since February 20, the Jazz are giving up only 88 points per 100 possessions, which is not just good, it’s off-the-charts great. And when you look at the teams they’ve defeated since the Kanter deal, the run looks even more impressive.

There could be all sorts of reasons for Utah’s newfound defensive fortitude, but the biggest one is literally the biggest one: 7-foot-1 center Rudy Gobert. On Tuesday night, Marc Gasol and Kosta Koufos combined to go 9-for-25 from the field. On Saturday, the Bucks’ centers made 3 of 16 shots. In the San Antonio game, Tim Duncan, Aron Baynes, and Tiago Splitter shot 10-for-24. In the Portland win, LaMarcus Aldridge, Robin Lopez, Meyers Leonard, and Chris Kaman combined to shoot 10-of-32. Gobert is giving French lessons out here, no matter what the pedigree of his opponent.

Since February 1, Utah is the only team in the league holding opponents to under 50 percent shooting inside of 8 feet. Sure, it’s a collective effort, and it involves some good scheming by first-year coach Quin Snyder, but it’s clear that Gobert is the most important factor.

Gobert blends athleticism, smarts, and freakish length. Athletic guys that can do what he does tend to be really good at defense. 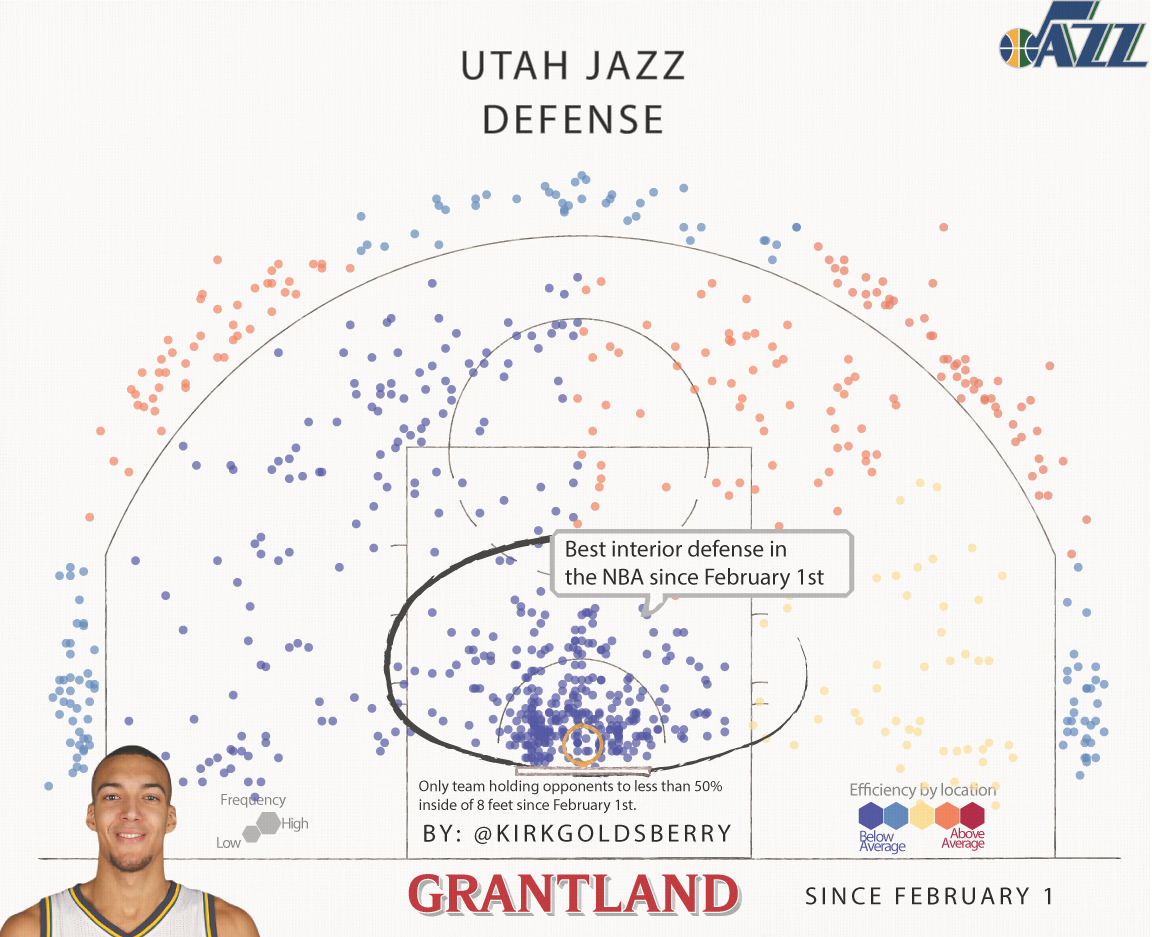 According to the league’s player-tracking system, out of 160 players that are facing at least three shots per game at the rim, nobody is more effective at disrupting those shots than Gobert; opponents are making only 38 percent of their close-range shots when he is within 5 feet. Any team that can take away the paint has a huge head start on becoming a great defense. With Kanter out of the picture, Gobert is getting more minutes and opponents are getting fewer layups.

It’s not uncommon to hear people talk about how it’s a point guard’s league these days. If you’re talking about offense, there’s certainly some truth to that. But on the defensive end, it’s still a big man’s game. Elite rim protectors like Gobert are still the most important characters within dominant defenses. Just ask the pre-2014-meltdown Pacers.

Gobert’s impact goes beyond rim protection. His emergence enabled the team to deal Kanter in the first place, which in turn will set the Jazz up to add more diverse young assets. Utah is already one of the youngest teams in the league, but unlike some of those other “young” teams, Utah looks like it is on the verge of establishing a formidable identity, rooted in its defensive play.

Gobert is having a Hibbert effect on the Jazz. He is facilitating a cohesive defensive brand that makes everyone look better. Great rim protectors are the best deodorant. This is a big moment for the Jazz, who have been floundering since the end of the Jerry Sloan era. The combination of good coaching and elite interior defense offers probably the simplest path to success in this league. And considering that Utah was the worst defensive team in the NBA just last season, this turnaround has been nothing short of remarkable. Magnifique, even.