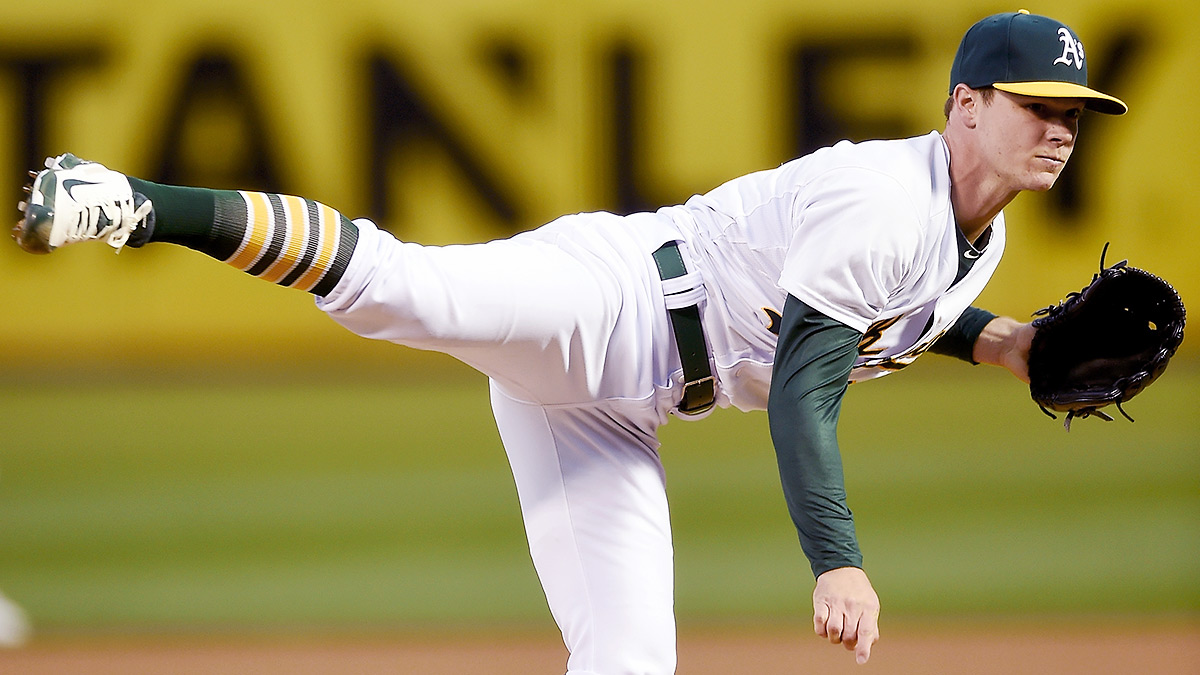 Major League Baseball is back, and like Delmon Young swinging at a breaking ball, it’s hard to put into words how much I missed it. It feels so great to not have to pretend to care about basketball anymore. It’s too early to draw any meaningful conclusions from a day and change of games, but here are the highlights and significant moments from Monday’s action.

The most impressive pitching performance of the night was the last. Oakland’s Sonny Gray, wearing a delightful pair of yellow-and-green-striped stirrups, scythed through an overmatched Rangers lineup like a starving man would a well-seasoned helping of potato salad. Gray took a no-hitter into the eighth, with the only Rangers baserunners in the first seven innings coming by way of an error and a hit batter before Ryan Rua broke up the no-no six outs short of Gray matching Bob Feller’s unique achievement.1

Through eight innings, Gray pumped 93 mph fastballs into the zone while offsetting his heater with his signature curveball, and between stints on the mound, he bounced around the dugout like he was enjoying the experience of kicking wholesale ass while the eyes of the baseball world focused on him. Along with David Price’s near-Maddux (more on that in a bit), it was a pretty good day for Vanderbilt pitchers.

Trout has faced Felix Hernandez on Opening Day in back-to-back seasons and has homered off him both times.

I love these guys.

Nowadays, Tommy John surgery is almost a foregone conclusion for an injury such as the partially torn UCL that Masahiro Tanaka suffered last July, but Tanaka wanted to try to gut it out. He said he’d change his approach, trying for less velocity and just sort of … hoping the tear would heal on its own? Which seemed like it would totally work for 200 innings. The worst-case scenario for such an approach is that Tanaka pitches badly, then needs the surgery later anyway, and the Yankees got a brief look at that particular possibility on Monday.

For two innings, he was great. He kept his splitters and sliders low and cruised through Toronto’s lineup, until he finally lost his command in the third and gave up five runs (four earned). Not all of that was his fault — Chase Headley fielded his position like he was shaving points — but it got ugly quickly for Tanaka.

Masahiro Tanaka has only had two starts in his MLB career in which he went fewer than five innings, and they're his last two starts.

This is one of the rare situations in which I wouldn’t disregard one game’s performance offhand. Tanaka admits he’s hurt, and he’s pitching like he’s hurt.

Kyle Kendrick was a significant part of the Phillies’ run from 2007 to 2011, when only Cole Hamels and Jamie Moyer threw more regular-season innings for the team. Yet Kendrick made just one playoff appearance in that span, since he’s the kind of pitcher who gets described as a sinker-baller not because he’s actually a ground ball machine, but because he doesn’t strike anyone out. Still, major league teams keep giving him the ball, so he’s got to do something well, right?

So far, he’s doing something well for Colorado, where he delivered six strikeouts and no walks in seven shutout innings in his team debut while also going 2-for-3 with a double at the plate in a 10-0 win over Milwaukee that was almost reprehensibly degrading to the Brewers.

How did his old buddies do? They lost 8-0 to the Red Sox, thanks to five Boston home runs, four of which came off Hamels. Late in the game, the cable feed from Philadelphia cut out, which forces one to consider things like symbolism and omens.

Miami Had an Indoor Rain Delay

Speaking of technical difficulties. Generally, we had good baseball weather on Monday, but there were a few exceptions. There were brief rain delays in Cincinnati and Miami, the latter of which was weird, because it never rains in Miami, so they built a ballpark without a roof.

Actually, it turns out that Marlins Park, that $2.4 billion taxpayer-funded, Baz Luhrmann–directed science fiction movie, does have a roof, which, for reasons passing understanding, remained open long enough to render the field unplayable for 16 minutes.

David Ortiz Is So Happy, He Could Dance

Ortiz can dance a little for a big, old guy. My favorite part of this Vine is Ryan Hanigan standing off to the side, drinking his water like two guys with 659 home runs waltzing in the dugout is the kind of thing you see every day.

The Reds Had a Fun Bottom of the Eighth

I don’t think this bears any particular significance, and I don’t think the Reds are going to be very good this year, but my favorite inning of the day, for whatever reason, came in the Reds-Pirates game. Johnny Cueto outpitched Francisco Liriano; both pitchers left after seven innings with the Reds up 2-0. Andrew McCutchen homered to tie it in the top of the eighth, and in the bottom of the eighth, the Reds took the lead back.

The interesting thing about the Reds is that they’ve got a couple of guys who are the best in the game at one particular skill. So with the game tied and Tony Watson on the mound, Billy Hamilton singled, then Joey Votto followed suit, using his incredible strike zone judgment and hand-eye coordination to battle back from an 0-2 count. Then Hamilton, sensing Watson was ignoring him, stole third base before either the catcher or the camera crew noticed he’d left. Of course, neither the single nor the stolen base mattered as Watson left a pitch up to Todd Frazier, who blasted what proved to be the game-winning homer to left.

That inning tells us absolutely nothing, and it involved two Rust Belt teams that largely get ignored by the bicoastal media complex, but it’s the kind of inning that makes baseball fun to watch: tense, exciting, and exquisitely executed. And we’ll get innings just like it pretty much every night for the next six months.

The Tigers Did OK in Their Ace Exchange

Max Scherzer was a little hard done in his Nationals debut, as Dan Uggla’s fielding suckitude infected Ian Desmond, once directly, once metaphysically. Scherzer pitched very well, taking a no-hitter into the sixth inning, but two errors led to three unearned runs, and he was saddled with the loss. It’s starting to sink in that the Nats can throw Scherzer and Jordan Zimmermann in their first two games, then still have Stephen Strasburg go against Matt Harvey on Thursday and Doug Fister go against Hamels on Saturday.

Meanwhile, Scherzer’s old team had some pretty good pitching itself, as David Price retired the first 13 batters he faced and was denied an Opening Day Maddux only by a Brian Dozier single with two outs in the ninth.

After the departure of James Shields, and mere days after Yordano Ventura signed a five-year contract extension, Royals fans had to have their hearts in their throats when Ventura, the team’s new ace and one of the most exciting pitchers in baseball, came out of the game, clutching his arm in excruciating, obvious pain. It turned out that Ventura’s problem was a cramp in his right thumb, which is a novel, if relatively minor, ailment. He’s not expected to miss a start.

In more positive news, Ryan Madson closed out the Royals’ 10-1 victory over the White Sox. After the 2011 season, Madson, a playoff-tested closer for Philadelphia with a high-90s fastball and one of the best changeups in the game, hit the free-agent market for the first time. When negotiations over a four-year, $44 million contract went south, the Phillies gave that money and more to Jonathan Papelbon, while Madson took a one-year deal in Cincinnati, leaving some $35 million in guaranteed money on the table. Madson, as it turns out, needed Tommy John surgery, and while the success rate for first-time Tommy John patients is something like 90 percent, Madson was one of the unlucky minority who experienced complications. His appearance Monday was his first in the big leagues in more than three years, capping a long road to recovery and constituting (we hope) the final chapter in an arduous story. Madson’s return is one of the few baseball stories that everyone should feel unreservedly good about.

The Astros are turning the corner this season. We shouldn’t expect them to compete for a playoff spot just yet, but they’ve assembled a credible major league team, one that could get to .500 if everything goes well. Monday was the first step, as Dallas Keuchel and two relievers held the Cleveland Indians to three hits in a 2-0 win, besting incumbent Cy Young winner Corey Kluber in the process. Houston’s not a pushover anymore.