Home Run Derby Power Rankings: Baseball Is Better With a Bracket and a Clock 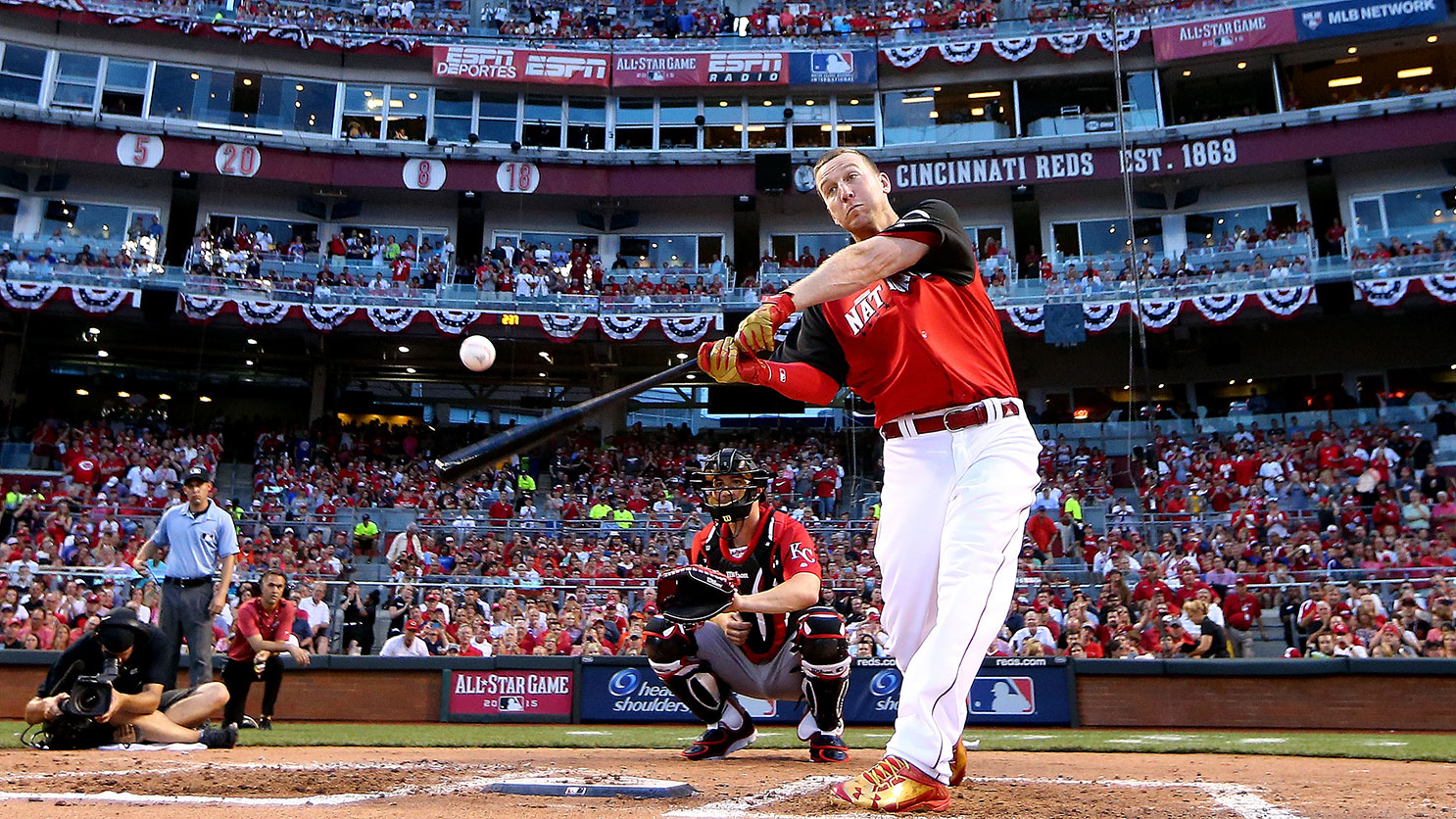 Cincinnati’s Todd Frazier became only the second player to win the Home Run Derby in his own stadium, but where you end up matters less than how you got there. Here are the real top performers from Monday’s action.

1. The Clock and the Bracket (tie)

For more than 100 years, baseball fans — including me — have crowed about how great it is that baseball does not have a clock. This was stupid and pretentious and we were wrong.

From the beginning of time, derby rounds have been based on a limit of outs or swings without hitting home runs. The top half of the contestants in the first round moved on, regardless of order, and we didn’t get a head-to-head battle until the final, when everyone just wanted to go home because the novelty had already worn off and the batters got tired after the first round.

This year, the competition was head-to-head all the way — with timed rounds and bonuses for distance — and the format was better in every way. The head-to-head matchups meant there was immediate drama in every round, and it led to great TV moments like Manny Machado, fresh off an impressive 12-homer round, looking sick to his stomach as Joc Pederson took his lunch money.

Making time the determining factor, and not outs, both eliminated the penalty for swinging-and-missing and incentivized getting lots of swings in quickly. As someone who’s always liked the Home Run Derby, I’d never appreciated how much dead time there was as pitchers took their time and batters waited for perfect pitches before swinging. By comparison, this was nonstop action.

In an attempt to get the whole competition in before a thunderstorm hit Cincinnati, MLB chose to shorten the rounds from the originally planned five minutes to four, and in so doing might have stumbled upon the perfect length. While previous iterations stretched on well into the night, this year’s derby was done in about two and a half hours, even including commercials, mid-event interviews, and corporate plugs — in other words, all the real reasons televised baseball so often seems interminable.

The final effect of the new format? More dingers.

Last year, Frazier was a surprise finalist, and kind of an underwhelming one if we’re being honest. He hit only two homers in the first round and beat Justin Morneau 1-0 in a swing-off to advance, then beat The Mighty Giancarlo Stanton 1-0 in the semifinal, then hit only one home run in the final. Most of us would like the score progression of a derby champion to look less like the score progression of the Greek soccer team through Euro 2004.

In the new format, tempo was everything, and Frazier’s older brother Charlie, who’d pitched to him last year in Minnesota, fed him fastball after fastball. In each round, Frazier started slowly, then peppered the wall and the stands to charge back over the last couple of minutes. Under the new rules, the pitcher had to wait until the previous ball had hit the ground before throwing the next, and Charlie pushed that rule to the limit. During Frazier’s runs, the next ball was on the way before the camera panned back from the outfield.

When those home runs came in bunches, the crowd in Cincinnati went bonkers — particularly when Frazier hit two home runs in the last 10 seconds to beat Josh Donaldson in the semifinals, then delivered nine home runs in 22 swings to catch Joc Pederson in the final. (Another bonus of having timed rounds? Buzzer-beaters.)

So rarely does the champion deliver the most memorable performance, so it’s OK that Pederson came up just short. The Dodgers center fielder tied Frazier for the most home runs on the night, with 39, despite punching Machado out with a minute and five seconds left on his clock in the first round.1 Pederson hit towering home runs, line drives, wall scrapers, fat ones, skinny ones, short ones, tall ones. He went oppo a shocking number of times for a home run competition, and his 487-foot first-round blast was the longest of the night. This was the Hamilton-in-2008 breakout performance we were waiting for.

Frazier wasn’t the only local hero who came through on the big stage.

“Hey, that dude made a pretty nice grab on that foul ball from Josh Donaldson.”

Perfect bracket, yes. Kind of rooting for Finals pick to bust, though. https://t.co/zaLV3pPnus

Laying out a perfect bracket, then rooting against it so one of your favorite young players can cap off his outrageous tear with a win? That’s a pretty good night. 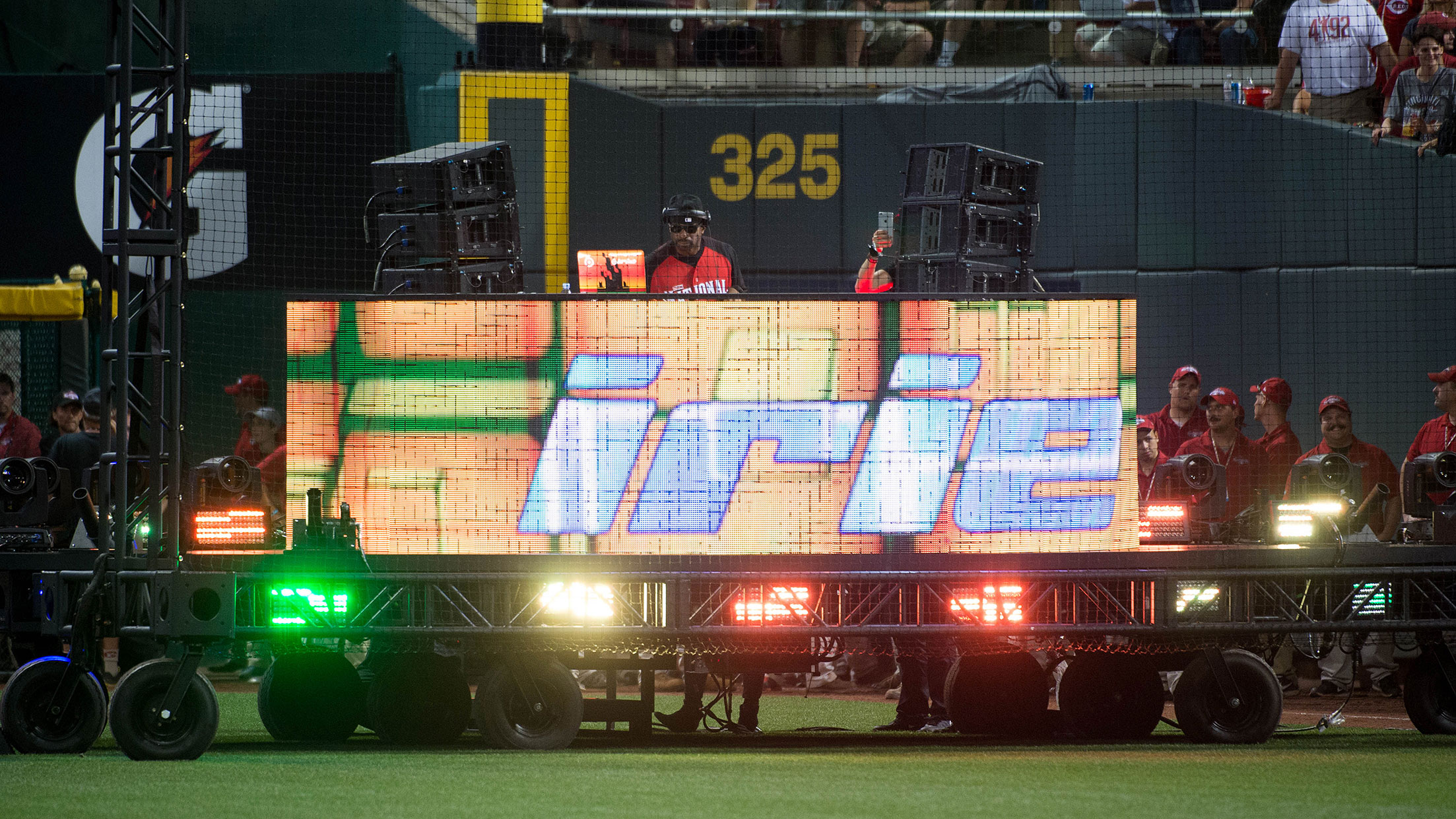 “Hi, Jeff, it’s Rob Manfred. Listen, I just had this idea for the derby, and I want to see if you can make it happen.”

“OK, so you know that truck made of amps in Mad Max? I want one of those, only with a DJ instead of a guitarist, and after player intros, let’s wheel him out to right field and keep him in fair territory during the whole thing. You think that’ll work?”

“Mad Max truck, with a DJ, in fair territory. Got it.”

Possibly the most universally beloved player of the past 30 years, in the city where he played nine years, throwing out the first pitch, to his father, before an event that he, and he alone, has won three times. Nah, sure, just walk halfway to the mound and back-foot a rainbow, then head back to the dugout without ever coming to a full stop. I make a point never to get on great athletes for not hustling, but they should’ve just brought in Megan Rapinoe.

Great American Ballpark is situated in such a way that the ball could leave the stadium in fair territory and land in the Ohio River. I’m a big fan of balls leaving the field of play and landing in bodies of water, and I knew in my head that because the river’s about 600 feet from home plate, that probably wasn’t going to happen. It’s still a little disappointing that we didn’t get a ball to clear the stands, land on the sidewalk, and bounce into the river or something.

So here’s the thing about having your dad pitch to you in the Home Run Derby: It might be a great family moment, but you’re probably going to lose, because just like you wouldn’t pick your dad based solely on his ability to throw batting practice, you shouldn’t expect someone to throw good batting practice just because he checked your closet for monsters.

Two years ago, Bryce Harper was able to make the final with his dad on the mound, but he could take as many errant pitches as he wanted. This year, Kris Bryant fought off balls under his hands and had to pass on several pitches out of the zone while time ran down. Mike Bryant did a lot better than my dad — or most of the dads I know — would have, but he did need to be reminded that the bonus round was starting.

Exceptions can be made in the rare circumstance that your dad — or other family member — is, in fact, a professional. Charlie Frazier played several years in the minors and runs a baseball clinic back in New Jersey, and his rhythm and consistency were crucial in his brother’s win. Robinson Cano famously won the derby with his father, a former major league pitcher, throwing to him. Although, when I brought that up on Twitter, I was duly reminded that Jose Cano led his son to finish dead last in each of the next two years, so maybe there’s always that lingering fear that the old man is trying to get one past you.

Will Kris Bryant look back fondly on having his father pitch to him in a big league stadium, with millions watching on TV? Probably. But if everyone has a weakness, tonight we learned Bryant’s: He values love over dingers.

A Tale of Two Cities: Phoenix and Philly Plot Different Courses to Contention

Exhibition Simulation: What Would Happen If the Royals Played the NL All-Stars?