Exhibition Simulation: What Would Happen If the Royals Played the NL All-Stars? 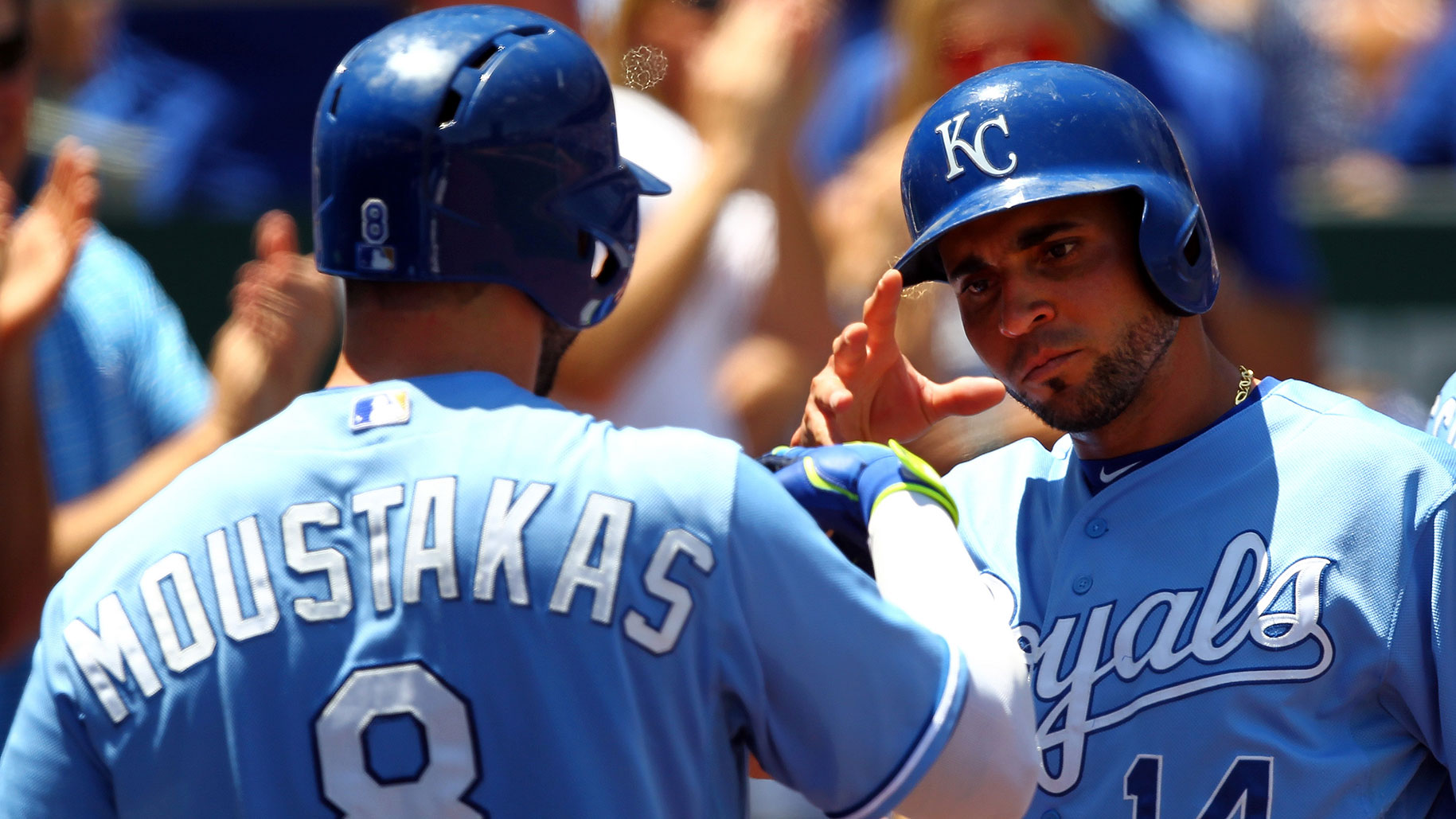 Much to Major League Baseball’s relief, Omar Infante is taking All-Star week off. Infante, the replacement-level Kansas City second baseman who improbably led the fan voting at his position for much of the season’s first half, was one of a few Royals who threatened to turn the AL All-Star roster into a nationally televised reminder that the event’s voting process and everyone-plays usage pattern are incompatible with both its postseason stakes and its goal of giving MLB’s biggest stars the spotlight.

Ultimately, DEFCON Kansas City was averted and sanity was (mostly) restored to the selections, either because the world is mostly made up of non-Royals fans or because commissioner Rob Manfred invented enough email addresses to swing the Jose Altuve vote from his Park Avenue office. Only four Royals — catcher Salvador Perez, shortstop Alcides Escobar, and outfielders Lorenzo Cain and Alex Gordon — qualified for the game via fan voting, and all except Perez have strong statistical cases. Gordon, who strained his groin last week, will have to skip Cincinnati, although the three healthy K.C. starters will be joined by Royals relievers Wade Davis and Kelvin Herrera and third baseman Mike Moustakas, who won the fans’ Final Vote. That brings the total to seven Royals selections and six attendees, not counting AL manager Ned Yost, who’ll have a hard time handing out his beloved one-inning relief roles.

Unless the close encounter with Kendrys Morales prompts MLB to change the selection process next season — still unlikely, in light of the additional attention and sweet sponsorship cash the mostly harmless story generated — the Internet’s valiant attempt to pack the roster with Royals will fade to a footnote. But what if the all-Royals movement had succeeded beyond what the most fevered Infante supporter could have hoped? What if even the player-voters had been in on it? What if Yost had abused his appointment powers with even more patronage? And what if the requirement to include a representative from every team had suddenly been waived? In other words: What if today’s AL All-Star team were simply replaced by the Royals? How likely is it that the new, Royals-only AL squad — the same, sans Gordon, as the one with an AL-leading 52-34 record — would beat the NL’s best?

To answer that question, I turned to Mitchel Lichtman, coauthor of The Book: Playing the Percentages in Baseball and former sabermetric consultant to the St. Louis Cardinals. Lichtman maintains a projection system for use in his own research that can be harnessed to simulate hypothetical scenarios like the Royals All-Star apocalypse. All we have to do is pick the players and let the projections run. Rather than try to anticipate managerial moves under atypical All-Star conditions, we’ll pit both teams against each other over a full season to get a sense of the gulf in true talent between rosters.

The first step is to set our lineups, using the regular Royals batting order (sans Gordon) and the projected best player available at each position for the NL All-Stars (also absent injured selections such as Giancarlo Stanton and Matt Holliday). In an NL park, with no DH, those lineups look like this:

The number to the right of each name is a projected park-neutral Weighted On-Base Average, a rate stat on the OBP scale that assigns a different value to each offensive event rather than treating all hits and outs the same. (For context, this season’s league-average wOBA is .310.) The numbers, as expected, reveal big imbalances everywhere: The NL All-Stars have edges of at least 25 points at every position. And in AL parks — where AL teams, constructed with the DH in mind, often have an edge in interleague play — the run-scoring gap grows, since Yost has to settle for Morales (.329), while NL manager Bruce Bochy can platoon Adrian Gonzalez versus right-handed pitchers (.344) and Ryan Braun versus southpaws (.358).

Even without Gordon, a man among corner outfielders, the Royals unsurprisingly excel on defense, with a projection that puts them 21 runs above average per 150 games, compared to the NL All-Stars’ minus-five runs. In reality — well, whatever version of reality we’re working with here — the difference would be smaller, because that projection excludes catchers. Both Perez and Posey have above-average arms, and Perez has the Gold Gloves, but Posey has by far the better blocking and framing performance. That’s enough to open up a projected 16-run lead, although Perez’s superior game-calling skills would whittle that down.

Kansas City’s most glaring positional weak spot has been its starting pitching. The Royals have had a bottom-10 rotation by some defense-independent measures, so the projected production gap in that area is predictably large. Here’s how the two starting staffs stack up by what Lichtman terms “normalized projected RA/9,” the number of runs each starter would allow per nine innings in a league where the average is 4.00:

According to the projections, the Royals have one (barely) above-average starter, and their ace is considerably worse than the NL’s fifth starter. For the sake of the simulation, we assume that the teams use the same five starters all season, pitting them against each other as follows. Then Lichtman computes each team’s runs scored and allowed totals based on the players’ projected performance and translates those into wins and losses using an established formula.

Even in the most favorable matchup — Volquez vs. deGrom, with home-field advantage on K.C.’s side — the All-Stars still prevail at about a 100-win clip. Overall, the NL All-Stars go 109-53 over a 162-game season, a .673 winning percentage. It’s worth mentioning, though, that Lichtman’s projections — like those at Baseball Prospectus and FanGraphs — still see the Royals as close to a .500 team over the rest of the season, and they’ve easily exceeded that figure so far. If they can keep up their overachieving in simulation land, they might get the All-Stars down to .650.

The more complex one makes the simulation, though, the worse Kansas City will fare. The Royals, who are sending two setup men to Cincinnati, have the best bullpen in baseball — projected by Lichtman for a 3.34 combined RA/9, after factoring in leverage and role — but the NL bullpen, culled from 15 teams, does slightly better, at 3.25. And while roster depth wouldn’t matter that much in a single game, it would be a big differentiator over the course of a season. For the Royals, every injury or day off would require a call-up from the minors or playing time for a bench bat like Drew Butera,2 whereas the NL team would always have another All-Star waiting in the wings. Factor in the All-Stars’ future Hall of Fame manager, and it’s reasonable to say that the Royals, when facing an All-Star team, would be reduced to the same record (roughly 48-114) that a team of replacement-level players would post against an average big league club. Which makes sense: The average replacement-level player is just good enough to replicate the performance of the worst player on a typical MLB team. And the average Royal — in other words, a big leaguer who’s a little bit above average — is probably capable of matching the output of DJ LeMahieu the worst All-Star in any given season.

If you voted for underqualified Royals in order to embarrass MLB, force Joe Buck to intone “Alex Rios,” or trigger every Royals incentive clause, simulations are scant consolation for tonight’s mostly reasonable roster. And if you checked off “Infante” for the pleasure of watching mismatched opponents, you’ll have to be satisfied with the celebrity softball game. But if you did it for science — to find out what would happen if an All-Star roster played a regular one — well, now you know.

Home Run Derby Power Rankings: Baseball Is Better With a Bracket and a Clock