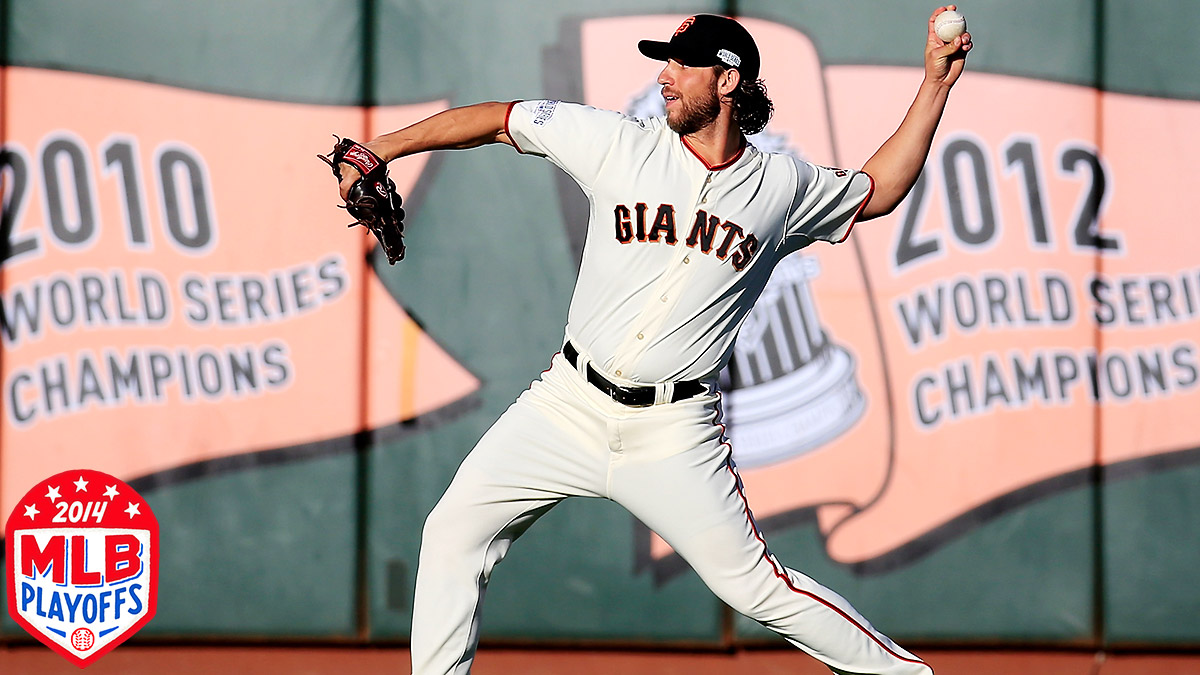 The Royals blew out the Giants 10-0 in Game 6, forcing a final showdown for all the marbles. Trying to predict what will happen tonight might be a fool’s errand, but we can still forecast the major factors that might decide Game 7 — and with it, the 2014 MLB champion. So, let’s do just that!

San Francisco’s ace has already turned in one of the best World Series performances of all time, allowing just one run over 16 spectacular innings. Since today is his throw day — when he’d throw practice pitches in the bullpen to keep his arm limber between starts — in addition to Game 7 of the World Freakin’ Series, it’s a virtual lock that he’ll make it into the game at some point.

The question is how long he’ll last. What pitchers do on their throw days varies considerably; one front-office executive told me a pitcher might throw anywhere from 20 to 50 pitches. Before Game 6, a reporter asked Bruce Bochy about Bumgarner’s habits, but the Giants skipper didn’t exactly provide clarity: “Last time he didn’t throw a bullpen,” said Bochy, referring to the stretch between Games 1 and 5, and the decision to skip the session to save the ace’s bullets for later in the series. “But sometimes he’ll go the second day, sometimes the third day.” Bochy didn’t say anything about how many pitches Bumgarner might throw. After Game 6, however, the lefty offered his opinion of how long he might be able to go:

Bumgarner was very droll as reporters tried to dig for details about his Game 7 availability. How many pitches could he throw? "200."

In reality, it’s possible to envision Bumgarner pitching as few as one inning and as many as three. He might be able to go even longer, though the 10 extra pitches he used to finish the Game 5 shutout that was all but decided could limit him today and look very foolish in retrospect.

All of our postseason coverage!

Still, as aggressive as Bochy was in yanking starter Jake Peavy in the second inning of Game 6, he’s conventional enough to guarantee that Tim Hudson will start tonight rather than roll the dice by rushing Bumgarner on two days’ rest.1 And so Giants fans will have to hope that Bumgarner gets into the game under better circumstances than the monumental jam that Peavy left for Yusmeiro Petit last night. If Bumgarner enters a tight game and fires multiple shutout innings, that alone could swing the result San Francisco’s way.

Though Nori Aoki had also struggled until his big RBI single in the second inning last night, Gordon has been the biggest disappointment among K.C. hitters in the World Series. The left fielder has gone just 3-for-24 with no walks against the Giants, posting enough lousy results to make manager Ned Yost cancel his short-lived experiment with Gordon in the 2-hole and drop him back to sixth in the order. This is a curious slump, considering Gordon was the Royals’ best hitter during the regular season and a terror earlier this postseason, delivering a robust .448 on-base percentage, three doubles, and a homer in 29 plate appearances in the ALDS and ALCS combined.

Facing Hudson might be just the ticket for the left fielder, though. Rather than fixate on the tiny sample size generated by batter-pitcher matchups, it can be more instructive to focus on how a hitter fares against a certain pitch type. Hudson relies primarily on his sinker, throwing that pitch 42 percent of the time in 2014. That’s potentially good news for Gordon: According to ESPN Stats & Info, Gordon has hit an incredible .380/.486/.570 against sinkers in 146 career plate appearances. While that’s still not a gigantic sample, it’s big enough to indicate that Gordon is adept at hitting sinkers — and maybe Hudson.

Even though five of the six World Series games have ended as one-sided affairs, it’s still jarring to see that Affeldt has thrown only three innings in those six games, especially since three of those eventual blowouts were close for a while. Affeldt holds the record for most consecutive scoreless appearances in the playoffs, and his excellence is evident in much larger sample sizes, too. For instance, in his six seasons in San Francisco (not counting playoff games), Affeldt has posted a 2.76 ERA in 326.1 innings pitched, with just 16 homers allowed. Unlike many bullpen lefties, he’s put up similar numbers against righties and lefties. He’s also shown he can go more than the one inning trusted to most relievers, recording more than three outs 13 times during the 2014 regular season.

The Giants need to start using Affeldt like what he is: one of the best relievers in baseball. If he’s used aggressively tonight, he, Bumgarner, and Petit (who threw just 17 pitches in Game 6 and had pitched in only one other World Series game) could give the Giants a relief corps that rivals the Royals’ pre-closer group of Kelvin Herrera, Wade Davis, Brandon Finnegan, James Shields, and any other hands on deck.

Luck could play a big role tonight; it sure has so far. The Royals entered the World Series as the clearly superior defensive team, with an outfield that turned scores of would-be singles, doubles, and triples into outs. As I wrote Monday, the Giants washed away that advantage: The Royals allowed a .429 BABIP against bloopers (soft-hit liners and short fly balls) through the first five games of the series, compared to just .235 for the Giants.

In Game 6, that luck turned right around, as the Royals scored seven runs in the second inning thanks to a blitzkrieg of blips and bloops. Gordon started the inning with a dying quail that landed in front of Gregor Blanco. After a solid single to right by Salvador Perez, Mike Moustakas snuck a double down the right-field line that was a few inches from rolling foul. Alcides Escobar hit a squibber that Brandon Belt misplayed, then Lorenzo Cain hit another bloop, pushing the score to 4-0. When Eric Hosmer chopped a ball in front of home plate, over Brandon Crawford’s head, and into center for a two-run double, the game had reached apocalyptic levels of lousy Giants luck.

That second inning offered a reminder that Giants fans, Royals fans, and all baseball fans should keep in mind heading into tonight’s winner-takes-all send-off: We can handicap each team’s strengths and weaknesses all we want, but that doesn’t change the reality that anything can happen in one game. Anything.

This article has been updated to correctly indicate that Alcides Escobar hit the second-inning squibber.