World Series Game 1: A Win for the Giants, a Loss for Momentum, and Blurred Dreams in a Royally Blue Town 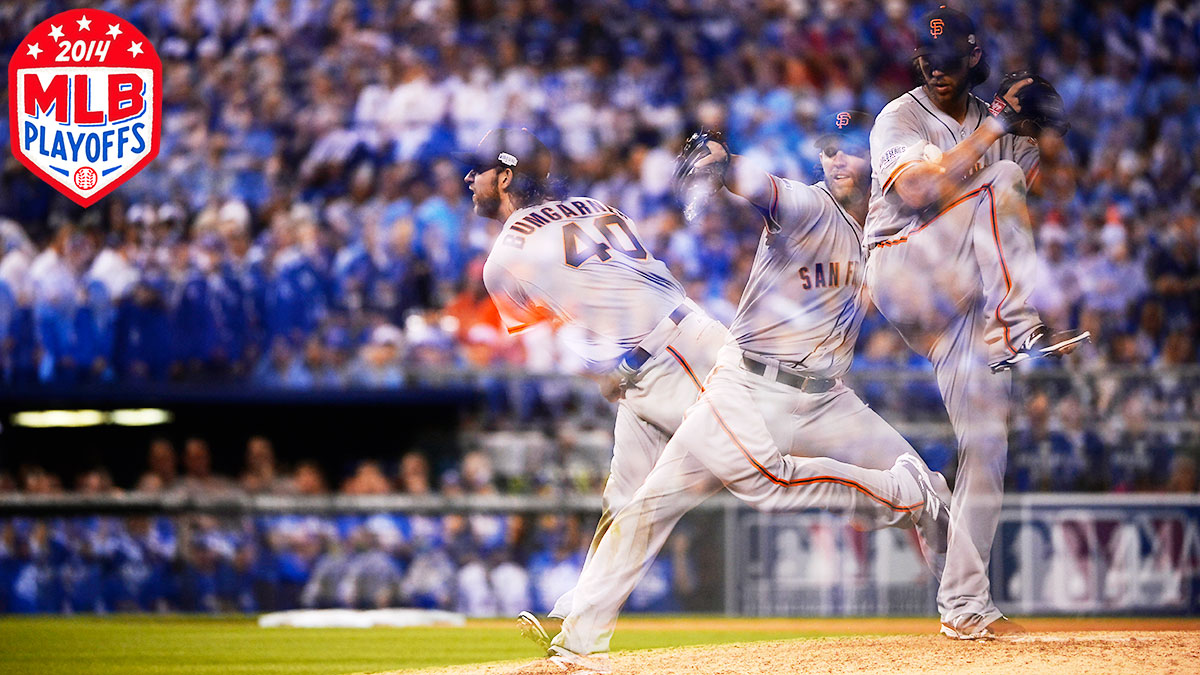 In New York, where I’m from, major sporting events don’t have enough sway to reshape the city’s surface. There are too many sports teams, too many titles, too many nonfans going about their business as they normally would, either oblivious or indifferent to the fact that there’s a World Series or a Super Bowl somewhere close by. Even the fans pride themselves on acting like they’ve been there before, which means maintaining the fiction that pennants aren’t precious in every city. New York doesn’t fully redecorate for fleeting civic events.

That’s not the way the World Series works in Kansas City. No matter where one walks, it’s impossible not to see a city in Series mode. Buses alternate between displaying their own destinations and encouraging the Royals to reach theirs. Fountains in downtown squares run Royals blue, and baseball banners hang from streetlights. Cars streaming in from the airport, bearing both baseball writers toting laptops and fans carrying rolled-up signs retrieved from overhead bins, roll past an enormous Royals logo emblazoned in the grass by the side of the road. A hastily erected Royals merchandise store, laden with blue, stands in my sleek hotel’s lobby. An astonishing number of pedestrians both near and far from Kauffman Stadium sport World Series gear that came off an assembly line in the last couple of weeks, reassuring themselves with every reflection that this is all real. It’s as if the city has sprung up and swollen to celebrate and profit from this event, like San Francisco after James W. Marshall struck gold at Sutter’s Mill.

All of our postseason coverage!
But with great excitement comes the potential for great disappointment, as Grantland’s Rany Jazayerli wrote on Tuesday. And Game 1 of the World Series delivered that disappointment, both for Royals fans and for impartial observers spoiled by weeks of nail-biting baseball. Entering last night, 56 percent of this year’s postseason games had been decided by one run, often late or in extra innings, and sometimes after a fateful managerial move that almost overshadowed the players involved. Last night, in the Giants’ 7-1 victory, there was little doubt and even less controversy. The Royals, for the first time since September 27, lost a baseball game. And the Giants, led by the reliably great Madison Bumgarner, won one whose outcome seemed inevitable, both emotionally and statistically, early on.

“Momentum is a beautiful thing,” Giants manager Bruce Bochy told the press before the game, adding, “It just makes life a lot easier when you win some games and you think you’re going to get some wins.” Bochy, however, didn’t clear up the mystery of who has the momentum when two teams enter a series a combined 16-2 in the postseason, one undefeated and the other riding the high of a pennant-clinching walk-off win. Red Sox slugger David Ortiz, appearing as an analyst on Fox, opined that the 8-0 Royals were on the more beautiful run. With a five-day layoff between Kansas City’s final ALCS win and World Series Game 1, though, momentum believers must have wondered whether that head of steam would survive. In their first eight games, the Royals had been the Road Runner, speeding past every potential pitfall with no hint of awareness that there’s always a teetering anvil overhead. With so much time to kill, would they look down, like Wile E. Coyote, and realize that going undefeated in October is as difficult as running through thin air?

If the Royals did have the momentum, it didn’t last long — which makes the more statistically inclined among us question, for the umpteenth time, how much momentum means. Giants center fielder Gregor Blanco led off the game with a single that fell in front of Lorenzo Cain, something that hadn’t seemed possible for much of this month. When Cain tracked down a deep fly from Joe Panik for the first out, Blanco tagged and took second, Kansas City–style. And while fear of Alex Gordon’s arm froze Blanco at third after a Buster Posey single, that deterrence didn’t prove pivotal, as it had in ALCS Game 2. The next batter, Pablo Sandoval, doubled, extending his postseason on-base streak to 24 games and driving in Blanco (but not Posey, who got caught at the plate by Nori Aoki’s quick pickup in right and a relay from Omar Infante). And then Hunter Pence homered to center on a 93 mph four-seamer from Royals starter James Shields that could hardly have looked more inviting.

That seventh pitch to Pence missed the center of the strike zone by three inches. When batters put balls within a four-square-inch area of that pitch’s location in play this season, they hit .345 and slugged .693. Of the 1,610 balls in that four-inch zone that were put into play, 77 went over the wall. That seventh pitch wasn’t Shields’s only poorly located offering. Many of his pitches went nowhere near their intended locations, and his changeups in particular lacked their usual guidance system. Shields knew it: After throwing six changeups in the first, he abandoned the pitch completely until the fourth. But by then, as announcers love to intone at the end of an inning in which one team scores, the damage was done: The Royals had allowed as many runs to the first five Giants hitters as they had in the last 24 innings of the ALCS.

Lack of momentum didn’t make Shields miss his spots. Maybe pitching on 11 days’ rest made him too strong. Maybe all the pitches he threw before that rest made him weak in a way that only a winter can cure: Shields has thrown more pitches this season than any other starter (although a heavy workload didn’t seem to bother Bumgarner, who’s now thrown the second-most pitches), and he has a 7.11 ERA in four starts this postseason. Whatever the cause of his lack of command, Shields made his shortest start since 2008. But while Tuesday’s outing might endanger Shields’s nickname, it didn’t shake Ned Yost’s faith, with the manager saying he’d start Shields in a potential Game 5.

“I don’t think the layoff had anything to do with the ballgame tonight,” Yost said after the game. “I think what had a lot to do with the ballgame tonight was Madison Bumgarner.” When Bochy was asked whether there was anything to differentiate Bumgarner’s Game 1 performance from his previous starts, he said no — Bumgarner was merely brilliant in the usual way.

Sixty-one of Bumgarner’s 106 pitches (58 percent) were fastballs, consistent with his recent wholehearted embrace of the pitch, which he once employed no more often than his now-neglected cutter. If you’re having trouble keeping his strong starts straight, you can remember this one for a few distinctive flourishes. Bumgarner no-sold an Aoki liner right back through the box, gloving it with ease. Atoning for his costly NLDS Game 3 throwing error, he made two accurate throws under pressure, once after knocking down another liner and once after fielding a broken-bat grounder off the bat of Salvador Perez. He also racked up style points with two 68 mph curves, one of which struck out Mike Moustakas in the fifth. The only blemish on Bumgarner’s line was a Perez solo shot in the seventh, which broke Bumgarner’s 21-inning World Series scoreless streak. Given how effective the 25-year-old Bumgarner has been, hitters will have to hope that teammate Jake Peavy doesn’t follow through on his pregame vow to make the lefty — who doesn’t scout his opponents via video — start “digging a little bit deeper” into batter tendencies.

Although the Royals completed multiple comebacks in the AL wild-card game, their strength is preserving leads, not undoing deficits. Kansas City threatened in the third, when Infante led off with a broken-bat dribbler that confused Giants shortstop Brandon Crawford, followed by a Moustakas double. But Bumgarner mowed down Alcides Escobar and Aoki, walked Cain, and got an Eric Hosmer grounder to end the inning. “I was really impressed with the way he fed off our aggressiveness and just worked up the ladder to get out of that jam,” Yost said.

That third out sank Kansas City’s win expectancy below 20 percent, and it only fell from there. In October, we’ve barely seen the Royals behind in a game, let alone in a series. We can’t make too much of one loss, just as we shouldn’t make too much of eight wins, but when they can’t play prevent baseball, the Royals look like the flawed team they were for long stretches of the regular season.

In the ALCS, Yost earned praise for his willingness to ride his elite relievers more heavily than he had in the regular season, and to insert Jarrod Dyson for defense as early as the sixth. But some of the dramatic increase in the percentage of innings devoted to Kelvin Herrera, Wade Davis, and Greg Holland over the first three rounds was dependent on context: The Royals were almost always winning. When the team went down by three in the first inning of Game 1 — and by five in the fourth, as a Michael Morse RBI single (off Shields) and a Blanco bases-loaded walk (off Danny Duffy, pitching for the first time since ALDS Game 1) extended San Francisco’s lead — Yost’s big playoff weapons were spiked.

For the first time this postseason, Davis and Holland got a game off, and Dyson was limited to reprising his signature dance during pregame introductions. Instead, it was Bochy who got aggressive, pulling NLCS hero and iffy left fielder Travis Ishikawa in the fourth for pinch bunter/defensive specialist Juan Perez. The Royals couldn’t run, because they couldn’t get on base. Aoki’s humorous routes were no longer harmless. And it was Blanco who made the kind of rally-killing catch that we’ve become accustomed to seeing from Kansas City. “Defensively, I think we’re very evenly matched,” Yost said.

Royals fans will now have to endure some dismaying stats about previous pennant winners who have gone down in Game 1: Ten of the last 11 to do so ultimately succumbed in the Series, and Kansas City’s home-field advantage (which it wouldn’t have gotten until Game 7) is gone. There are some positives: Duffy, returning from his Michael Wacha–esque exile, pitched well after his initial wildness — so well, in fact, that one could question why Yost left him in for 59 pitches rather than keep him fresh for future bullpen work — and Game 2 starter Yordano Ventura has had “absolutely dynamite” side sessions (according to Yost) since his injury-related removal from ALCS Game 2. And then there’s the best news of all: The Royals can look forward to a few games against someone other than Bumgarner.

Oh, and there’s another lesson we (re)learned in Game 1: Momentum, if it exists, is easy to overcome.