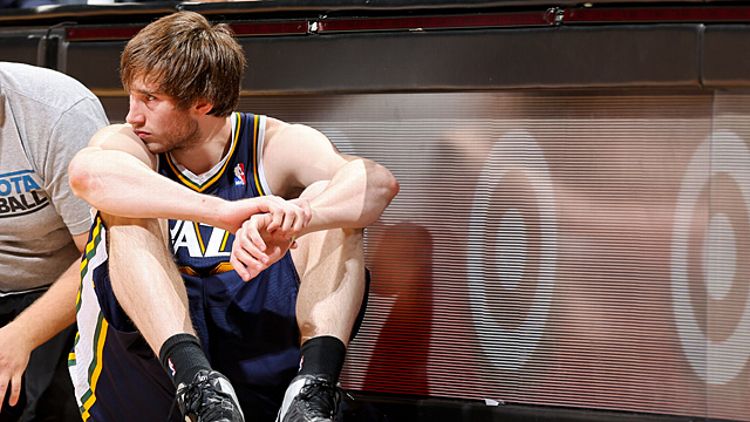 If you gave me 20 minutes to create a player in NBA 2K13, my finished product would basically be Gordon Hayward. He’d be a tall and athletic wing capable of doing a little bit of everything — solid perimeter shooting, posting up against smaller players, making quick reads in motion (with or without the ball) — with a delightful little quirk in his programming, like, say, the block rating ratcheted way up, to gift him with an unnatural propensity for chase-down blocks. This player would probably rate out to a 77 overall — very good, but not at an All-Star level. In actual unreality, Hayward was a 68 in NBA 2K13. Fair, considering the limited sample of his productivity. But last year, despite the Jazz’s best efforts to screw it up, Hayward was excellent. So, in the initial ratings list released for NBA 2K14, he got a much-deserved bump — to a 70. Wait, what?

Yeah, Hayward wasn’t too pleased, either.

Since then, the good folks at 2K Sports have made amends after what I’m sure was a flood of tweets and e-mails from the rabid Utah Jazz fans out there. Hayward is now a 76 in the game, numerically much closer to the player I see when I watch him play (in real life).

2K Sports shouldn’t take the brunt of the blame. Sports video games aim to mirror reality and can only reflect what is projected. How could a game offer a realistic portrait of Hayward when Hayward’s own team couldn’t decide what to make of him? From mid-November to mid-March, Hayward was Utah’s super sixth man. He was their Manu Ginobili, except, unlike the Spurs and Ginobili, the Jazz never had a legitimate reason not to start him. For four months, Hayward watched from the bench as the Jazz trotted out a backcourt of Jamaal Tinsley and Randy Foye. Salt Lake City saw 26-degree weather on average last January. It’s a freaking miracle that hellish duo wasn’t enough to melt the city to oblivion.

So far, Hayward is looking sharp in the preseason. Last night, against the Portland Trail Blazers, Hayward looked incredibly comfortable creating for himself. Late in the second quarter, he drove down the right side of the lane, gave his defender an in-and-out dribble, shook him with a hesitation fake, and drilled a short jumper that led to a three-point play. It was pretty, but more important was how confident he looked executing it. His pick-and-roll rapport with Derrick Favors is developing nicely, too, and will be a fun thing to keep an eye on as the season progresses.

Hayward is going through a pretty significant role shift, but he doesn’t seem to be shying away from the challenge. Listen to a Jazz broadcast long enough and you’ll hear the question over and over again: Is Gordon Hayward ready for the next step? Is he ready to shine? If you’re snickering, I won’t stop you. Broadcasters and fans talking themselves into Hayward as the team’s no. 1 option is all you need to know about how bleak this Jazz season will be. But that shouldn’t be an indictment of Hayward’s potential, and it shouldn’t preclude the season from being an interesting ride. A season after being buried in the depth chart, he has emerged as the team’s best player (though the distinction for “most important player” probably goes to Favors).

It’s quite the transition, but it seems Hayward is keen on making the necessary adjustments.

From the Salt Lake Tribune:

“I’ve got to get serious,” he said. “It’s going to be my third year. I said that in media day too. I cannot just go out there and do some crazy stuff anymore. I’ve got to be serious about some stuff because the team made a lot of changes and they did it because of the opportunity to play for the young guys.”

Hayward is clearly talking about his play on the court, though it’s funny to imagine the “crazy stuff” as something like sneaking into a StarCraft II tournament at 4 a.m. with a bottle of 5-Hour Energy and a carton of milk on hand a few hours before morning practice. He’s right, though. There is no time to be crazy, no time to construct additional pylons when you are suddenly handed the responsibility of leading an NBA team.

(It’s come to my attention that those were Enes Kanter’s words, not Hayward’s, but the sentiment behind them is surely shared by Hayward, too.)

If we’re lucky, it’ll be his true introduction to the NBA mainstream. Unless you’re a Jazz fan or a fantasy basketball fanatic, Hayward isn’t a household name. He’s a confluence of disarming characteristics, largely defined by his Midwestern, small-town background and the coded language that exists in phrases like “deceptively athletic.” Everything about him seems tailor-made to be underestimated, to keep him under a veil of relative anonymity. If there is a narrative for Gordon Hayward, that might be it. But if he lives up to the Jazz’s expectations, this could be the last year he’s able to exploit the league’s collective cluelessness.

Week 7 Fantasy Football Preview: If It Feels Wrong, Do It Anyway

About Last Night: Happy to Be Napoli