Week 7 Fantasy Football Preview: If It Feels Wrong, Do It Anyway 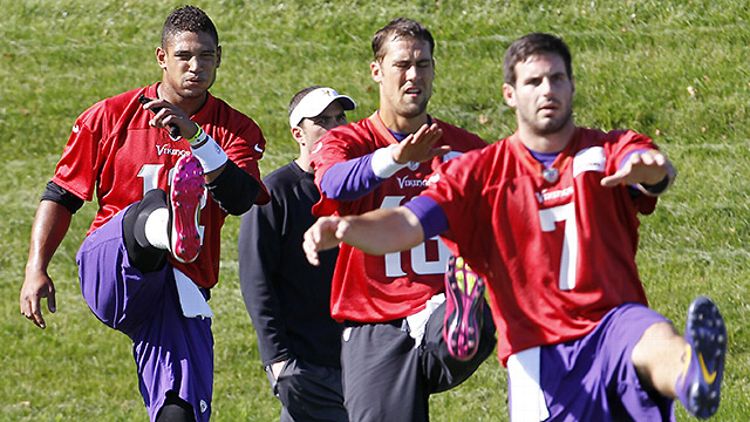 It’s hard to believe, but in a couple days we’ll be halfway through fantasy football’s regular season. Are you livin’ on a prayer? God knows I am. Tom Brady and Ray Rice have sunk my dynasty league team’s ship to an unthinkable 1-5, and unless things turn around this weekend (SPOILER ALERT: they won’t), the fire sale begins on Monday. Meanwhile, some asshole sits comfortably atop the standings thanks to Peyton Manning AND Adrian Peterson.

So this post goes out to all my fellow cellar dwellers, the hardy souls who’d do just about anything for a win at this point. You had good reasons — VERY good reasons — for taking Colin Kaepernick or C.J. Spiller or Tavon Austin where you did. But sometimes a great process leads to not-so-great results. It’s a fact of life, and a fact of fantasy football. So, best of luck with Nick Foles.

Let’s establish a few things before I begin espousing Freeman’s virtues, lest you assume I developed a nasty drug habit this week. First, I don’t think Freeman is a very good real-life quarterback, and if I had to rank all 30 Week 7 starters based solely on actual ability, Freeman would fall somewhere between Andy Dalton and Chad Henne. Moreover, you shouldn’t touch Freeman in fantasy unless (a) you’re a backup-less Drew Brees/Michael Vick owner, or (b) you play in a two-QB league. Finally, the Angels/Demons concept is about recognizing players who will either exceed or fall short of expectations, and Freeman’s expectations are decidedly low.

But since matchups are half the battle in fantasy, I kind of like Freeman’s prospects this week. The injury-decimated Giants surrender 22 points per game to opposing quarterbacks, and they’ll undoubtedly be focused on neutralizing Adrian Peterson, leaving Freeman with opportunities to make plays in the passing game. Remember Doug Martin’s world-beating stretch last season? Freeman posted four games of 20-plus fantasy points during that run, and he’s got an even better runner in his backfield now. Additionally, owners shouldn’t discount the idea that a change of scenery could lead to a short-term upsurge in production for Freeman, who must’ve been thrilled to escape Greg Schiano’s temple of doom. If Thad Lewis can score 21 fantasy points, so can Freeman.

With Danny Amendola and Rob Gronkowski both likely out this week, Patriots-Jets II is going to mirror Patriots-Jets I, which featured a lot of Julian Edelman. Despite playing in a freaking monsoon, Edelman grabbed 13 receptions for 78 yards (and, along with his fellow receivers, caused Tom Brady to lose his shit), and there’s no reason to believe Edelman can’t replicate those numbers in much more favorable conditions. He’s also available in an astounding 46.4 percent of ESPN.com leagues, so grab him right now if you can acquire him for free. Unicorns, show ponies, Edelman’s got the beef:

At 0-6, the Giants have every reason to consider trading Hakeem Nicks, who figures to sign elsewhere this offseason as the G-Men embark on a full-fledged rebuild. While losing a wideout of Nicks’s caliber may be difficult to digest, already having a promising replacement like Randle makes such a move significantly easier. Accordingly, expect Randle to see more and more opportunities as the season progresses, although he’s the type of player who can make a fantasy impact even if he sees only a few targets. Also, did I mention he’s a TRUTH WARRIOR?

Reuben Randle and David Wilson roast each other with NO REMORSE. pic.twitter.com/V7rlod75C8

David Wilson has as many fumbles on the year as Randle does drops (two), so I think we know who won that debate.

Every fantasy league includes that one owner who floods everyone with one-sided trade offers, as if it’s totally reasonable to deal, say, LeSean McCoy for BenJarvus Green-Ellis, Tavon Austin, and Martellus Bennett. Eventually, something must be done to subdue these monsters. Me? I propose about 10 equally ridiculous counteroffers, which usually does the trick.

I raise this point because a fellow owner in my PPR league offered me Trent Richardson and the immortal Zac Stacy for Matt Forte. It totally ruined my morning, but it also got me thinking about Richardson, who was drafted ahead of Forte in standard and PPR formats. Forte vastly outperformed Richardson early this season, but most reasonable people assumed Cleveland’s offense was simply suffocating Richardson’s ability.

However, getting traded to the Colts hasn’t aided Richardson’s fantasy value whatsoever. Preposterously, Donald Brown outscored Richardson in Weeks 5 and 6 on 19 fewer carries. Meanwhile, Willis McGahee, a 31-year-old vet who probably can’t break 5.0 in the 40-yard dash, has been plenty serviceable in Richardson’s absence in Cleveland, and Ahmad Bradshaw’s season-ending neck injury is the only thing keeping T-Rich off the bench. Kevin Seifert notes that the Colts need to “unleash” Andrew Luck, which could mean even fewer opportunities and even worse fantasy performances for Richardson. Further developing Luck is the obvious and necessary step for Indy’s offense, especially if the Colts want to keep pace with the Broncos on Sunday, so prepare for another fantasy no-show from the former third overall NFL draft pick.

Carson Palmer, history’s greatest pick-six artist, was born to play against Richard Sherman. Picasso had the canvas, Mozart had the symphony, and now Palmer has his matchup with the NFL’s archetypal corner, meaning he can make beautiful, transcendent interceptions. Palmer’s two picks in San Francisco were nice but unmemorable, because anyone can cause a turnover by throwing into quadruple coverage.

Thursday night will be different, though. In fact, it may well be historic, because Palmer needs to do something to upstage Matt Schaub. Of course, slow and steady wins the race, and Palmer, savvy vet that he is, knows this. He’ll begin to pick up the pace by targeting Fitzgerald a few too many times against the Seahawks, and Sherman will be more than happy to return these ill-advised passes for touchdowns. This leaves Fitzgerald, who will already be struggling with a hamstring injury, in a sort of fantasy no-man’s-land. Don’t bench him, but don’t expect anything more than WR3 numbers out of him this week, either.

Cameron caught only five balls for 64 yards last week, and three of those receptions (plus 43 of those yards) came during a meaningless last-minute drive after the game was already decided. Granted, when it comes to fantasy, meaningless drives count just as much as meaningful ones, but Cameron’s semi-decent stat line obscures a larger truth: He did absolutely nothing when the Lions weren’t playing prevent defense.

Although the Packers have allowed plenty of fantasy points to opposing tight ends, I think playing with Brandon Weeden will prevent Cameron from returning to the heights he attained in Weeks 3 and 4 with HOYER THE DESTROYER. Sure, a glance at Cameron’s game log indicates that he played well with Weeden in Weeks 1 and 2, but that’s when Cameron was a relatively unknown commodity. A sizable chunk of those early-season receptions came on plays where he was wide open, and those easy fantasy points will be few and far between now that defenses are planning specifically for him. Going forward, Cameron will need the ball delivered into precise windows, and obviously Weeden cannot be relied upon to do that. Barring injury (which, it should be noted, is way more likely with Weeden under center), Cameron will still finish the season as a top-10 tight end, but you’d be wise to trade him while your league mates still think of him as top-five material.

Jim Irsay really, really wants you to know that he meant no disrespect to Peyton Manning when he boasted to USA Today that “we’ve changed our model a little bit, because we wanted more than one [Super Bowl ring].” Meanwhile, Peyton’s silence on the issue is deafening.

Jim Irsay actually has a call into Peyton Manning today. PM has been busy. Hasn't had a chance to return call

It’s probably best that Irsay didn’t get ahold of Manning. Based on the owner’s aggressively caps-locked Twitter feed, a conversation likely would have exacerbated matters.

Will Colts Nation GET LOUD ENOUGH … to BLOW the roof OFF on the Broncos? I doubt it. Manning thrives in this type of environment, at least in the regular season, and would surely love nothing more than to send Irsay on a social media rampage. Manning will repay owners for the unacceptable 13-point game he delivered last week against the Jaguars, which means rebound performances for his receivers as well.

As mentioned above, the Colts will have to eschew balance if they want to stay in the game. Luck should notch a top fantasy performance versus a struggling Denver defense, as should Reggie Wayne and T.Y. Hilton. And despite everything I’ve said about Richardson, you still have to start him (duh), if only for his goal-line capabilities.

When evaluating NFL defenses, it’s important to disregard all games in which Matt Flynn started at quarterback. (The 2011 Detroit Lions enthusiastically support this idea.) I mean, you wouldn’t assign much worth to a stout defensive effort if it came against a sick child, right? Well, Flynn is the NFL’s feverish kid.

With that in mind, the Redskins defense seems a lot less impressive. The Skins are already allowing the seventh-most fantasy points to opposing quarterbacks, and they were fortunate enough to play Flynn in Week 4, which inflated their numbers considerably. Tony Romo’s oddly low eight-point outing versus the Skins in Week 6 was the outlier to end all outliers, and Jay Cutler will correct this error in Washington, where he’ll easily extend his streak of 20-plus point fantasy games to three.

1. QB Ryan Tannehill, Miami Dolphins (available in 85.5 percent of ESPN.com leagues): Are you a Drew Brees owner? Did you fail to scoop Nick Foles off the waiver wire? Do you REFUSE to sip the Josh Freeman Kool-Aid? If you answered “yes” to all three questions, consider starting Tannehill, a paragon of consistency who’s the best bet on the board to score 12 or 13 unremarkable points for your squad.

2. TE Coby Fleener, Indianapolis Colts (72. 9 percent): I’m firmly in “I’ll believe it when I see it” mode with Fleener. Dwayne Allen’s season-ending injury hasn’t been the fantasy boon many thought it would be for Fleener, and four of his six games have resulted in one or zero points. However, of all the widely available tight ends (read: of all the potential Jimmy Graham fill-ins), Fleener’s upside is undoubtedly the highest. Starting Garrett Graham would be akin to waving the white flag, and you’re not ready to surrender yet. Hope for the best with Fleener, who might just sneak into the end zone in a likely shootout.

3. K Adam Vinatieri, Indianapolis Colts (81.9 percent): You know the doofus in your league who always starts a way-too-early run on kickers? Back in the early 2000s, that guy was in love with Vinatieri. From 2002-04, Vinatieri would go off the board in, like, Round 10, largely because of his postseason success. Anyway, if you’re a Garrett Hartley or Sebastian Janikowski owner, feel free to honor that drafter by subbing in Vinatieri. Again, Colts-Broncos seems bound to be a shootout, and that means plenty of action for Vinatieri.