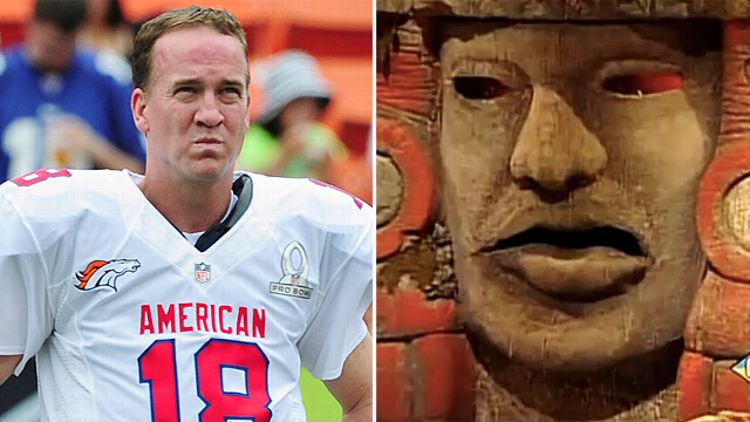 May 22, 2013
by Robert Mays, Chris Ryan and Jason Concepcion

The Pro Bowl has long been the snag in the NFL’s run at presenting a perfect television product. I haven’t watched a Pro Bowl in at least five years, and I’m the person who watched every minute of Jets-Titans on Monday night last season. In the NBA, there’s an understanding that the first 40 minutes are exhibition, and for the last eight, there’s enough pride at stake that we’re afforded something resembling a full effort. For football players, the risk of injury far outweighs any incentive to really play. And that, NFL Network’s Albert Breer says, is why the league is looking to “make it so every single minute of the game has some sort of thing that’s going to keep fans interested and engaged.”

Part of that plan, Breer says, involves making the Pro Bowl more like a TV game show. But which game show? The league apparently doesn’t “feel the need to keep the integrity of what a normal football game is.” Luckily, neither do we.

Chris Ryan: What does the Pro Bowl lack? Danger. Don’t get me wrong, these guys play in dangerous conditions every week. They never know when James Harrison is going to turn them into a character from Awakenings or one wrong step on some futura-turf is going to make one of their knees have the consistency of ramen noodles. The night is dark and full of terrors for these guys. But the Pro Bowl isn’t dangerous; it’s a vacation.

Any game show–ification of the Pro Bowl needs to correct this issue. I can only think of one way to do this: Make the Pro Bowl more like Wipeout.

So you put an elevated field above a giant wave pool. And then you have giant, hard foam beams swinging around, knocking these guys into the water. You want to maybe add a man-eating sea creature to this? I’m open to suggestions. There are no bad ideas in a brainstorm. I think you could maybe even incorporate the guys from Waterworld.

Patrick Peterson vs. the Cookie Cutter Swing vs. a bunch of barracudas and Smokers. I just invented Running Man. Thank me later.

netw3rk: For me, a Pro Bowl game show should do the following things: utilize the local environment, promote the NFL brand and its players, and make sure no one blows out an ACL. The answer is Pro Bowl Survivor. Two tribes, AFC and NFC. On Friday, players arrive in their tribal villages, where the big reveal is there will be a tribal council later that night, and one quarterback from each tribe will be immediately voted out. Quarterbacks get a chance to campaign throughout the day — promising receivers catches, for example — in exchange for their support. Saturday, each tribe is split up under the leadership of the remaining quarterbacks to compete against each other in various Survivor-type obstacle courses, mud-pit wrestling matches, and puzzles. The lowest-scoring AFC and NFC quarterback sub-tribes are eliminated, leaving the remaining quarterbacks to campaign in advance of the night’s tribal council, where the starter is determined. Sunday is the final AFC-vs.-NFC showdown game, flag-football style. The twist is the winning team gets its travel off the island taken care of, whereas the losing team gets one fully charged cell phone with which to book their flights home.

Robert Mays: If we’re turning the Pro Bowl into a game show, we might as well turn it into the best game show. I’m of course referring to Legends of the Hidden Temple. If by some chance you’re unfamiliar with ’90s television’s greatest triumph, Grantland’s own Rembert Browne wrote his master’s thesis on it a couple months ago.

There are plenty of directions this could go, but the one in which I’m interested involves Olmec-sanctioned temple runs following all touchdowns. What’s the biggest issue with the Pro Bowl? It’s too easy to score. How do we fix that? By placing a huge, obstacle-filled maze in the end zone. It’s pretty simple — if you don’t finish in the time allotted once you cross the goal line, you receive no points.

Who is opposed to this? Does anyone say no to watching Brandon Marshall have to assemble the Shrine of the Silver Monkey? Or watching Muhammad Wilkerson swing across the Pit of Despair (which, strangely, is also the working title for the documentary about the 2013 Jets)? How terrifying would it be when temple guard Andy Reid, decked out in full Hawaiian garb, jumps out of a trapped door? I’m pretty confident that everyone is excited about watching Peyton Manning crawl through small spaces.

One more fix, unrelated to LOTHT — incentives. Usually when we use that word, it’s about money or prizes, or some combination of the two. I feel like negative reinforcement is underrated here. Often, it’s even more effective in changing behavior than a reward. So here’s my proposal: Keeping in mind that many NFL players typically turn their Pro Bowl trips into extended vacations, the quarterback of the losing team has to spend his remaining time in Hawaii accompanied by Tom Coughlin. For the rest of the trip, he’s subject to Tom’s whims, including watching NCIS: Los Angeles in the middle of the afternoon. Imagine the line Tom Brady puts up if this is instituted. It would raise the bar for quarterbacking forever.

Winners and Losers From the NBA Lottery