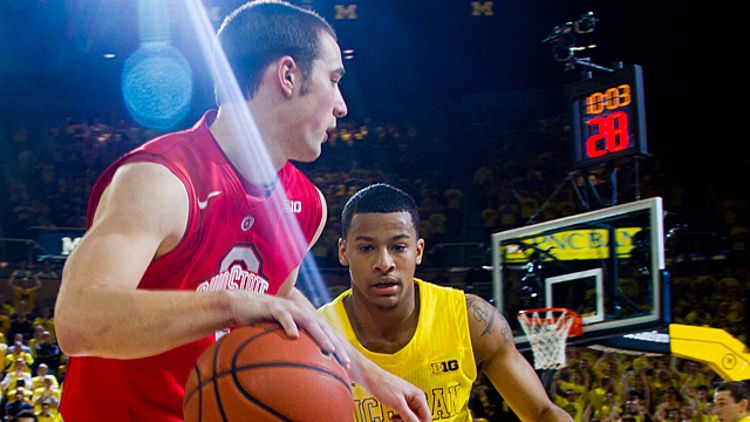 1. First and foremost, there’s no avoiding the question surrounding Aaron Craft’s last two shots. It began with nine seconds remaining and Ohio State trailing 75-74, when Craft drove by Trey Burke, pulled up for a jumper, and had his attempt blocked. After intentionally fouling Glenn Robinson III and watching him make one of two free throws, Craft again had the ball in his hands. He drove the lane, was blocked by Tim Hardaway Jr., and stared at the ceiling in disbelief as time expired. Game over, Michigan wins.

Was either block actually a foul? Let’s go right to the video:


The first thing I want to point out is that neither situation was obvious, and when you consider how reluctant referees have always been to make crunch time calls against the home team, it’s hard to blame them for letting these slide. Well, sort of hard. Because the fact is, after reviewing both plays, the only conclusion you can reach is that Craft was fouled twice. Burke swipes his left arm and shoulders before making the block, and Hardaway fouls him with the body, even if he makes an artful attempt to avoid hitting him with the arm. Clearly, those calls changed the outcome of the game.

2. Do you ever have a moment with an athlete you’ve disliked (or, in extreme cases, hated) when you realize his career is almost over, and, shit, you’re really going to miss him? I had that moment with Craft last night. It’s always been a treat to watch him and Trey Burke square off. Yesterday’s game was, I think, the peak of their two-year rivalry. Craft is the Rafael Nadal of the college basketball world — not spectacular or ethereal, but such a warrior and so damn gifted at the thing he does well (defense) that he becomes something like a force of nature.

My natural instinct in basketball is to root for guys like Burke because of their natural flair and aesthetic superiority, but in tennis I’ve always been attracted to Nadal’s resilient, tenacious style, and when I made the connection yesterday, Craft began to win me over. Yes, he sometimes forces things on offense (though I tend to think that’s a product of OSU’s limited options compared to last season), but otherwise he does everything right, and plays every moment hard. I know it’s a cliche, but there’s still something special about watching a player whose intensity never seems to ebb. And speaking of cliches, you can’t ignore how Craft carries himself. Even after the refs hung him out to dry, he allowed himself just that brief instant of world-weariness, lying on the floor, before he popped up, shook it off, and hugged Trey Burke.

3. Aaron Craft vs. Trey Burke is college basketball’s version of immovable object vs. irresistible force, and I really, really hope we get a bonus installment in the Big Ten tournament. And when I say “hope,” I mean to imply that it will be a small sports tragedy if it doesn’t happen. Watching these guys square off is the absolute best.

4. Which makes it crazy that Michigan’s offense didn’t consist entirely of people setting screens on Craft so that somebody else would have to guard Trey Burke. Sure, they did it a lot, but why not every single time? For the most part, Burke without the specter of Craft dogging him in the backcourt was a player who got into the lane, drew help, and dished for an open layup or a 3. Too often, late in the game or in overtime, Burke tried to take Craft one-on-one. It’s not like he couldn’t manage it; Burke is the best player in college basketball. But why take the risk? Why give Craft the chance to steal the ball, as he did on several occasions?

5. Speaking of which, here’s what happens when Aaron Craft is guarding you and you’re not a ball handler on the level of Trey Burke:

I swear I’m done gushing about Craft after this, but is that not the greatest shark-smelling-blood highlight you’ve ever seen? It’s almost like the moment Nik Stauskas saw him after the switch, he went into instant panic. He never had a chance.

6. Back to Burke. Please, let’s have this play be the death of hero ball in college hoops:

Coach John Beilein did the right thing by getting Craft off Burke. Deshaun Thomas is no slouch as a defender, but it did give the Wolverines an advantage. So why didn’t Burke try to penetrate? That’s the thing he does best, right? Here’s a list of events that could, and probably would, have unfolded if Burke drove: layup by Burke, foul on OSU, dish when help arrived for an easy layup, dish when help arrived for an open jumper/3. The only thing a pull-up 3 gets you? A pull-up 3, and a roughly 35 percent chance of winning the game … or probably less, since it would be contested by a 6-foot-7 defender.

7. Despite the loss, this was a really, really good result for Ohio State. I personally didn’t think they could be competitive against a team of Michigan’s caliber on the road, and in the end they should have won. I know rivalry games can be tricky to analyze, and I know Michigan still missed Jordan Morgan inside, but I’m willing to go out on a limb and say that the way the Buckeyes acquitted themselves, and the way they keep improving throughout the year, shows that they’re capable of winning the Big Ten and making the Final Four. It goes without saying that Sunday’s game against Indiana, in Columbus, will be very interesting.

8. At the same time, it was a huge win for Michigan. The only players taller than 6-foot-6 who even stepped out on the floor (OK, other than Morgan’s four minutes) were Jon Horford and Mitch McGary, a freshman who still looks a little green. Without Morgan, Beilein has been forced to play a more perimeter-heavy game than usual, and with this win and the close loss at Indiana, he’s shown Michigan can still compete at the highest level.

9. Speaking of which, we can officially bury the lingering notion that Tim Hardaway Jr. can’t play under pressure. In a six-minute stretch in the second half, he made five 3-pointers and scored 15 of Michigan’s 17 points. It’s no exaggeration to say that he rescued his team at a time when OSU was getting a lot of easy layups and threatening to run away with a win. Each of his five 3s came with Michigan trailing, infused his team with a much-needed jolt, and kept the visitors within range for the endgame.

10. I watched the entire game last night, watched a bunch of clips late last night and this morning to make the YouTube videos, and later this afternoon I plan to sit down and watch the second half again. Even for a college basketball junkie like myself, that doesn’t happen very often. Let’s all take a second to acknowledge the great game we just watched, and tip our caps to Big Ten basketball, which has shed the last remnants of its slow, stodgy reputation and provided us with endless entertainment this season.