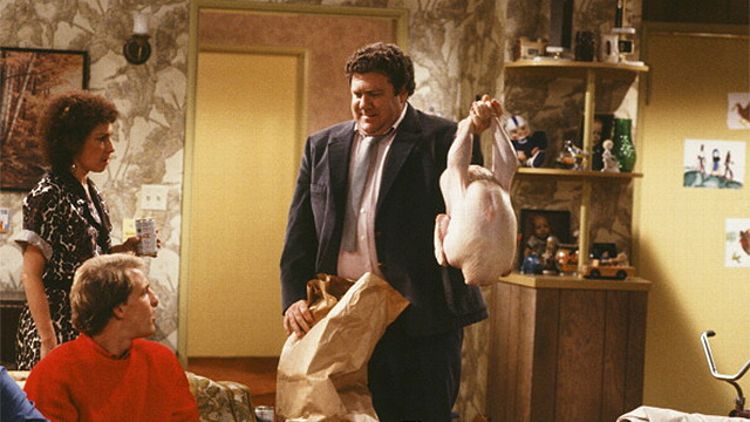 Editor’s note: The four day weekend is upon us, so we here at the Prospectus thought we’d leave you with a Hall Of Fame highlighting the occasional joys and frequent horrors of Thanksgiving Day. Why are Thanksgiving disasters so much more satisfying to recall than Thanksgiving successes? Perhaps there’s some comfort to be found in holiday schadenfreude, real or fictional, because we can all sympathize on some level. Unless of course, you’re Uncle Phil.

Scent Of A Woman

Bill Simmons: Just remember: no matter how depressing your Thanksgiving dinner is, it won’t be worse than this one.

Charles P. Pierce: Originally, I had two objections to Cheers. The first was that it ruined a perfectly good saloon. During my time at the Boston Phoenix, on those days in which I was engaged up at the State House trying to determine what had been stolen recently in the interests of democracy, the Bull and Finch was a valuable way station on the early evening stroll that inevitably ended at the Eliot Lounge. Then the TV show came, however, and thereafter every time you were in the Bull and Finch, you were even money either to end up explaining to some transient hayshaker that Norm wasn’t real, or to end up in every photo album in Des Moines. (I stopped going entirely when the owner became one of Newt Gingrich’s primary local sugar daddies. Why should I subsidize someone’s chronic Comely Aide problem, even from afar?) The second was that the show mainly consisted of people talking to each other in a bar, and I could (and did) engage in that every afternoon anyway.

This scene won my heart. From Diane’s insistence on dressing up like a Pilgrim lass, to the slow build to a classic food fight — it starts with someone tossing a radish and then escalates like World War I, the Squash of August — Cheers finally became an actual comedy. And, face it, every damn one of you has at least one relative — the Fox News–watching uncle, or the aunt who corrected your posture until you were 16 — who is eminently capable of setting one of these off every year, and the whole meal is just inches away from chaos. It’s like someone hit the Archduke Franz Ferdinand with a handful of green beans.

Bryan Curtis: Cliff Huxtable enters his brownstone. He is wearing a fedora and a damp rain jacket. The wind is howling like Hurricane Sandy. It is Thanksgiving. He is carrying a bag of groceries.

Clair: “Cliff, you forgot the canned pumpkin for the pumpkin pie.”

Cliff: “You never asked me to get canned pumpkin.”

Cliff reluctantly goes back into the rain. He returns some time later with another sack of groceries. The audience laughs. Clair inspects the bag and says, “Cliff, there are no eggs in here.” Cliff departs again. He is angry.

When he returns, Cliff finds that his son, Theo, has invited two friends over for dinner. Cliff will need more groceries. Also, he drops his eggs on the floor. The studio audience gasps. He departs.

When Cliff returns a final time, the entire family is arranged around the table, praying: “Heavenly father … ”

Cliff says, “You got that right.”

Mark Lisanti: Deep-fried turkey is delicious. It is also deadly. This guy doesn’t even want you to bother; the fryer is too inherently uncontrollable a device for the process to ever be truly safe. “If we can’t talk you out of it, just lock yourself in the garage and light yourself on fire. Save us all the trouble of having to worry about you,” he wants to say, but doesn’t, because he has a job to do, and that job is destroying your holiday with a caution as savory as a breast full of underseasoned white meat.

But once Mr. Hardhat Q. Killjoy steps aside at the 1:49 mark, welcome to the Additional B-Roll Turkey Conflagration Good Times Jamboree, starring a bunch of dudes in fireman drag stuffing frozen birds into overflowing vats of boiling oil and watching the world burn. Who do you want to party with on Thanksgiving? We thought so. (William Shatner.)

Sonic the Hedgehog ’93 — The Aftermath

Emily Yoshida: What does it mean that I had this vague memory from my childhood of something going horribly awry with a float from a Macy’s Thanksgiving Day Parade, and it severely bumming me out and haunting my tryptophan-fueled nightmares for the rest of the four-day weekend, and when I found the culprit 20 years later, I watched the clip 10 times in a row and laughed until I cried and Gchatted it to everyone who was online? I think it means I’m finally growing up.

Tess Lynch: “My people will be forced to live in mobile homes on reservations. Your people will wear cardigans and drink highballs.”

Rafe Bartholomew: When this SNL commercial satire aired in 1990, I coveted the original Reebok Pumps with the lime-green tongue and I thought this was some of the best hip-hop I’d ever heard. One could argue that my taste in footwear and music has only gone downhill since.

Dan Silver: The best fake trailer for the best fake movie we (meaning I) wish were really real.

The Fresh Prince of Bel-Air, “Home Is Where the Heart Attack Is”

Rembert Browne: No one describes the splendor of Thanksgiving dinner like Uncle Phil. NO ONE.