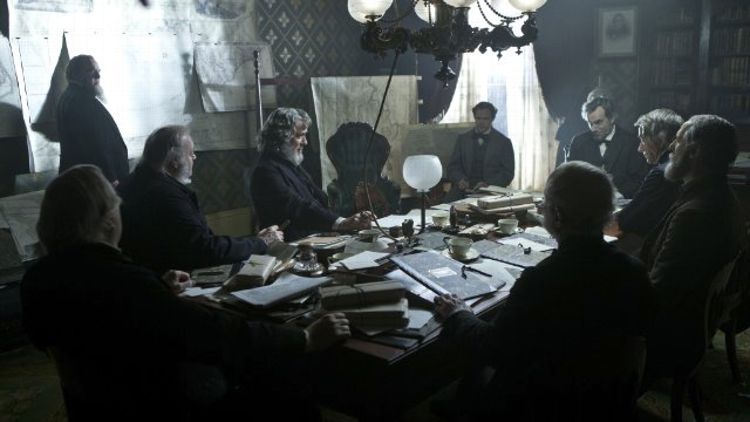 Editor’s note: Steven Spielberg’s Lincoln gets its wide theatrical release this weekend, so the rest of the country can see what we coastal elites have been ooh-ing and ahh-ing about. Fun fact about Lincoln: Everyone is in it. And sure, everyone will be talking up Daniel Day-Lewis’s no-brainer Oscar nomination as the titular president, but we thought the rest of its all-star ensemble should get their moments in the sun as well.

Hal Holbrook, All the President’s Men

So in Lincoln, Hal Holbrook is Preston Blair, which is very cool. You know how incoming presidents stay at the Blair House before they are inaugurated? … Yeah! It’s that guy’s house! (Did everyone already know that, too? Why don’t I have any concept of what people do and do not know?) He did other notable stuff besides just live in this house, obviously, but for now, let’s just focus on that. Stop by next time you are in Washington. Actually, maybe don’t, because I think it’s probably not the kind of place you’re allowed to just walk into. Please get elected first.

Sean Fennessey: I have always enjoyed the phenomenon of the late-blooming leading man, that moment when an actor with decades of experience but a small national profile appears, as if from the mind of a filmmaker, and is dropped deep into a great movie. Michael Stuhlbarg was a decorated stage actor for nearly 20 years before landing just his sixth feature-film role, and his first lead. He never had more than six lines in a movie before the Coen brothers cast him as Larry Gopnik, the forsaken physics professor at the center of A Serious Man, their 2009 film about desperation and faith and Minnesota and Jefferson Airplane. The Coens’ movies are like pumpkin-flavored food items — everyone has a favorite, none are bad. A Serious Man might be my pumpkin pie. Stuhlbarg gets a huge amount of credit for that. He is so blinkered, so stymied, so stripped of his dignity in this movie — it’s wonderful torture. His face sinks and crumples, his pupils dilate, his smile cracks into misery. Tucked into the above scene is a genius read on the bullshit conundrum of the Columbia Record Club, the practical scam that literally thousands of kids pulled on their parents to force them to pay for new albums. (I did, and that Kriss Kross album was glorious.) “I don’t want Santana Abraxas, I’ve just been in a terrible auto accident!” is possibly the best single line of movie dialogue of the past five years. Stuhlbarg, who has gained fame as Arnold Rothstein on Boardwalk Empire and is great in Lincoln as a solemn Kentucky congressman, could have been a famous character actor sooner. But it’s better he wasn’t.

Dan Silver: Walton Goggins was a journeyman character actor bouncing around Hollywood for years in roles like “Research Tech” in The Bourne Identity and “Harv” in the pilot episode of Pacific Blue. Then he landed the role of Detective Shane Vendrell on Shawn Ryan’s criminally underrated The Shield. In eight seasons, Goggins created a near-perfect antihero foil to the show’s lead Vic Mackey (played by Michael Chiklis). His corrupt and hubris-filled Shane always seemed to be the sympathetic soul of the show. Despite his abhorrent actions, audiences rooted for him like the sibling trying to break away from his older brother’s shadow. But only after Goggins was cast as Boyd Crowder in FX’s Justified did Hollywood begin to take note and start casting him in real movies in featured roles with real names. In a role that was originally intended to be a small recurring cameo in the show’s first season, Goggins’s Boyd — a the small-time white supremacist criminal and former best friend of the lawman Raylan Givens — is one of TV’s most menacing yet hilarious characters. I savor any Raylan/Boyd scene, and just love the stoic and even-keeled way in which Goggins plays the character. I was pleased to see Goggins cast in Lincoln, and equally excited when I saw him listed in Django Unchained. (Side note: The scene I really wanted to pick was his cameo in this season of Sons of Anarchy as the transgender escort Venus Van Damme. But alas, that scene is a hard one to find on the Interweb.)

Mark Lisanti: One could go on a deep dive into David Costabile’s IMDb page and try to find a clip of his turn as “Fingerprint Expert” in The Siege, or “Biker Who” in How the Grinch Stole Christmas. Or, on a shallower skim, one could note his fine and funny appearances as Doug, stalkerfan Mel’s put-upon husband, in Flight of the Conchords, or his work on the half-batshit fifth season of The Wire.

But come now. Costabile is (and will forever be, because that’s the way it works when you’ve created an indelible character on one of TV’s most beloved and respected shows) mild-mannered meth cooker Gale Boetticher. And when I call Gale to mind, it’s not the teakettle scene. Or the singing. It’s always this one, because of my own crippling addiction. All I can think about when I watch this is: “I want a meth lab so that I can brew the perfect cup of coffee.”

Molly Lambert: S. Epatha Merkerson, who plays biracial property owner Lydia Hamilton Smith in Lincoln, has appeared in more episodes of Law & Order than any other cast member of the franchise (even Richard Belzer). Her first name is legally “S.” but she prefers to be called Epatha (the middle “a” is long). Her first TV role was as Reba the Mail Lady on Pee-wee’s Playhouse. The Law & Order producers recruited her as NYPD lieutenant Anita Van Buren after a guest shot in which she played a mom. Although Merkerson left Law & Order in 2010, Lieutenant Van Buren is still the longest-running African American character in the history of television. Here’s Epatha dancing as Rachel “Nanny” Crosby in Lackawanna Blues, George C. Wolfe’s adaptation of Ruben Santiago-Hudson’s play, the role that rightfully won her a Golden Globe, Emmy, and SAG award.

Amos Barshad: From 1995 to 2005 John Hawkes was in Congo, From Dusk Till Dawn, Rush Hour, I Still Know What You Did Last Summer, Hardball, and Blue Streak. From 2005 to 2012 he was in Deadwood, Me and You and Everyone We Know, Eastbound & Down, Winter’s Bone, and Martha Marcy May Marlene. Next up: The Sessions, for which he miiiight win Best Actor. I think John Hawkes just accidentally had the greatest career ever.

Chris Ryan: Let the record show that my original choice for this LINCOHOF was David Strathairn’s brief but charming turn in the unnecessarily epic John Grisham adaption The Firm. Strathairn plays Tom Cruise’s incarcerated brother, who winds up being an integral part of the scheme Tom Cruise needs to cook up to free himself and Jeanne Tripplehorn from the clutches of the Quaker Oats Man. He’s awesome in that. However, there are no clips of Strathairn from The Firm on YouTube, so I went with the next best thing. This is one of the coolest scenes in one of the most rewatchable movies ever made: Sneakers. Strathairn plays Whistler, a blind computer genius and part of Robert Redford’s merry band of pranksters/thieves/political refugees and ex-spooks. In the above clip, he’s trying to help Redford determine where he was taken after being kidnapped by some guys who may or may not be working for the NSA. Strathairn is always compelling and usually plays deeply compassionate, charming characters who he pretty regularly imbues with his obvious intelligence. Whistler is all of those things.

James Spader, The Music of Chance

Andy Greenwald: Some choose to remember James Spader in his mid-’80s, Members Only glory, back when he was the undisputed, infinitely punchable face of preppie excess. Others are partial to his puffier, small-screen reincarnation as a pompous blowhard on both Boston Legal and The Office. Me, I’m still riding for his brief, grunge-era dabbling with his true destiny as an oddball character actor. The Music of Chance is an unjustly forgotten film from 1993 (based on a slightly more remembered — and equally excellent — Paul Auster novel). It stars Spader as a dirtbag gambler named Jack Pozzi — sort of a cross between Ratso Rizzo and Worm from Rounders — and a pre-beard Mandy Patinkin as Nashe, the decent guy with a good singing voice who gives him a ride. When the two get fleeced in a card game by Charles Durning and Joel Grey, they become indentured servants building an endless wall no one will ever see. (Trust me, it all kinda works.) The above clip doesn’t really do the film or Spader’s performance justice, but it’s still a decent reminder of what good actors are capable of when the pressure is off and the mustaches are on.

Jared Harris, Two of Us

Steven Hyden: I never thought I’d end up riding for VH1’s pretend Beatles movie Two of Us — which stars Jared Harris as John Lennon — twice in one week, but the burden of my duty sometimes requires a lack of restraint. If it’s hard to imagine the most tragic part of Sterling Cooper Draper Pryce portraying the most tragic part of the other Fab Four, well, there’s a good reason for that. Harris doesn’t much look or sound like Lennon; instead, he goes the Joaquin Phoenix route, suggesting the man’s essence rather than doing a full-on impersonation. At the very least, it’s nice to see an alternate reality for poor Lane Pryce, in which he dumps his stuffy British wife, takes up with a Japanese artist, and speaks entirely in puns and riddles from behind tinted granny glasses.

Katie Baker: Here’s Lukas Haas in his breakout role as a wee Amish lad who witnesses a murder in a train station bathroom in Witness, also known as My Dad’s Favorite Movie Until Regarding Henry Came Out. (Props to YouTube commenter thefutureprez2016: “I wrote the dialogue for this scene.”)

Emily Yoshida: JGL and I go way back. In middle school I had a strange, methodical, non-hysteric obsession with 3rd Rock From the Sun, which might have landed me somewhere on the autism spectrum at the time. Even though he wasn’t my favorite part of the show (that would be Kristen Johnson as Sally), I sustained a low-level crush on Tommy through most of that period, which was weird, because we had basically the same hair and wardrobe during the first few seasons. I had a VHS tape that had as many 3rd Rock episodes on it as would fit in long-play format, and I spent a summer in the TV room watching that tape on loop while I made friendship bracelets and hemp necklaces and waited for the next season to start. What can I say? I was an only child who found comfort in repetition. This episode, “I Brake for Dick,” in which Dick’s (John Lithgow’s) guilt after hitting a chipmunk inspires him to take up animal-rights activism, was one of them, and I could probably still recite that opening exchange between Tommy and his proto-hipster girlfriend August verbatim, along with the rest of the episode. In recent years, after not thinking about 3rd Rock for ages, I’ve tried to convince people of its brilliance, but I always sound insane, so I won’t tell you to watch the rest of the episode. But if you accidentally laugh when Sally tells Tommy to “kill [August] and get a new one,” I won’t hold it against you.

Rembert Browne: So many thoughts on the 1967-1970 run of The Flying Nun, but none more articulate than YouTube commenter Jimmy82022000: “The Flying nun was a very rated show. I know that to this day Sally still says she hated the show. But I think deep down She knows this was her best work. LOL.”