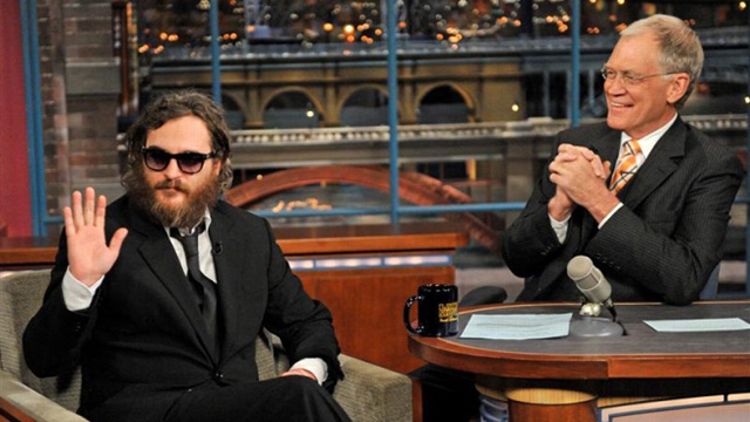 Harmony Korine’s Letterman legacy gave us the inspiration for this week’s HOF: a look back on all the times the predictable rhythm of a talk show has been shaken up by its guests and taken to another level, for better or, oftentimes, for worse.

Joaquin Phoenix on The Late Show With David Letterman (2009)

Mark Lisanti: Knowing what we know now — namely, that Joaquin Phoenix was in character for I’m Still Here, and that Letterman was mostly playing along — this clip falls a little short of the annoying-Dave pantheon occupied by the likes of Crispin Glover and an intermittently provocative Madonna. Still, it’s pretty fascinating to revisit, even with the curtain pulled back. Had Phoenix lost his damn mind, putting gum underneath Dave’s desk, or was he pulling an Andy Kaufman? Before there were any answers, the villagers emerged with pitchforks and torches, and there was much speculation about the end of the career Phoenix seemed to be willingly jettisoning to follow his drug-addled hip-hop muse. But then I’m Still Here came and went, the world shrugged off the inept “commentary” on modern celebrity, and Phoenix went off to film The Master.

All sins forgiven. Even the one where he pretended to be pooped on by his assistant.

Katie Baker: There aren’t many remaining YouTube videos of Lindsay Lohan making profiteroles on The Martha Stewart Show in 2007, most likely because they’ve all been snatched up by the National Gallery of Passive-Aggression to be treated forevermore as the fine works of art that they definitely are. Watching this feels like having to spend a long drive sitting shotgun next to, like, your friend’s snobbiest mom or your mom’s busybodiest friend. In the first part of the appearance, Martha asks Lindsay if she’s ever thought about, y’know, not partying so much, and the resultant rage-stirring is a sight to behold. (Lindsay’s biceps were definitely sore the next day.) Later, Martha softens. “Listen, Lindsay, I just wanted to say, up close, you are the most beautiful girl,” she says, then turns to the audience. “And she doesn’t look like she goes out every single night, she couldn’t look like this. Even at 20 you can’t look this good. You cannot.” Martha, as always, was right.

Mike Philbrick: Like many, I spent years quoting and worshiping Seinfeld. But after the show was over, I would see Jerry making appearances and, to be honest, I was almost always less than impressed. What did he have to prove at that point? After headlining one of television’s most iconic sitcoms for nine years, you’re under no obligation to ever make anyone laugh again. But did he ever really make anyone laugh? Look at the first 1:30 of this clip. He’s dying. And even though he was able to salvage a laugh at the end and receive a comic’s holy grail (albeit not the couch invite) — the wink/OK sign from Johnny Carson — this clip only proved what I already knew. Much like this, and this, and especially this, the Carson clip is just another chapter in the long passive-aggressive unintentional ad campaign that reminds us that Larry David and Curb Your Enthusiasm are far superior to all things Jerry.

Will Ferrell on Late Night With Conan O’Brien

Andy Greenwald: All talk show appearances are performances. Guests are heavily vetted beforehand with potentially amusing anecdotes — do you like to ski? How about that thing that happened that time! What’s that on your face? — gently extracted by forceps-waving producers in the green room. The very best celebrities are those who come ready to play: Tom Hanks, Bill Murray, Tracy Morgan. But to my mind Will Ferrell remains in a class by himself, especially when paired with his longtime pal Conan O’Brien. When the two get together they tend to do something I wish talk shows would do more often: chuck the whole overly rehearsed promotional waltz in the garbage. Instead, they get weird.

I’m not sure what year this clip is from, but it’s Ferrell doing his entire segment in character as Robert Goulet. He thinks Conan is Jonny Carson and calls Max “Doc.” He’s chain-smoking, drinking a bathtub-size martini, and admits he’s “just been driving a lot.” When things get quiet, he either shouts his name or says what everyone who ever sits on one of those plush couches must think at some point or another: “So … what do we do now?” This. I wish they just did this.

Rembert Browne: The most popular gem from this disastrously moderated interview, a meme before memes were commonly referred to as memes, is Cam’ron saying “YOU MAD” and giggling like a child.

The often overlooked part, however, is Giles’s Marilyn Manson impression. This will always be my favorite. 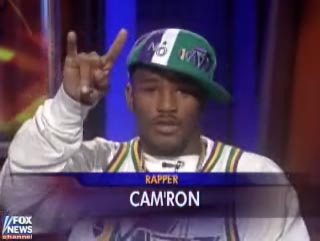 Bryan Curtis: David Letterman’s interviews with Drew Barrymore and Farrah Fawcett were nothing compared to his visits with Cher. Beginning in 1986, smack dab in the Late Night heyday, Dave vs. Cher was as fraught as a peace summit at Camp David. Not just because the interviews went badly. (A lot of interviews on Late Night went badly.) They were notable for their mix of sexual tension, Mr. Blackwell–style wardrobe insults, and a very Dave-like meta-discourse on what a talk-show interview should be.

With Cher, Dave was usually the chatty one. Take this appearance from 1991:

Dave: “I think a lot of people are under the impression that you and I don’t like each other … That’s not true. You and I get along just fine, don’t we?

Cher went on to explain, “Sometimes I think you can be a little rude to your guests.” Dave then asked if Cher was wearing a wig, which sorta proved her point. But we’re getting ahead of ourselves.

Cher’s first notorious appearance on Late Night — apparently not online — came in 1986. It was memorable because she called Dave an “asshole.” This was back when saying “asshole” was a big enough deal that it was dumped from the network broadcast.

There were viewers, ironically, who thought Cher’s curse was a blow for common decency. (Shirley MacLaine, under Dave’s cross-examination about her belief in past lives, quipped, “Maybe Cher was right. Maybe you are an asshole.”) But mostly it was a badge Late Night fans wore proudly. Dave was an asshole. His willingness to treat guests badly, rather than fawn over their latest project, was one reason we liked him.

A year later, Cher returned to Late Night with Sonny Bono. Dave started in on her outfit (“Was there a fire at the hotel?”), then asked if she and Sonny would ever get back together. Cher said she expected more from Dave.

Sonny looked like the cop in the white suit who watched Lee Harvey Oswald’s murder.

In her older, blonder phase, Cher consented to appear a couple of times with Dave on CBS. There was no longer a shock in saying “asshole” on TV or in conducting boorish interviews. The shock was that Cher had agreed, grudgingly, that she needed to appear on a talk show to keep her career afloat. Dave’s grin said it all: I got you, babe.

Gore Vidal and Norman Mailer on The Dick Cavett Show

Sean Fennessey: When Gore Vidal — public intellectual, author, playwright, screenwriter, activist, historian, crank, patrician, interlocutor, and self-described “gentleman bitch” — died last July, many were quick to point to the above clip as a notable moment in the man’s life. It’s a short confrontation between Vidal and Mailer, the author and mad bully, followed by a memorable tête-à-tête between Mailer and Cavett. Their feud, Mailer and Vidal, is legendary and it made for great TV in a way that feels nothing like TV at all. This was more than 40 years ago and you don’t need to measure the width of Cavett’s tie to tell. There’s not a single show on television today that would host the kind of exchange seen above, not the preening-est, most pontificatory, most pompous gasp of smart-guy air. Not Charlie Rose. Not Meet the Press. Not Real Time With Bill Maher. Certainly not any of the late-night talk shows. This is two blowhards par excellence dueling over their own intelligence, like children, yes, but so aggressively, and with such fustiness. “My sense of intellectual pollution,” Mailer mewls, like Thurston Howell III meets Lionel Trilling. And he was the tough guy of the two. I tried to think of a modern-day version of this and genuinely couldn’t muster a suitable example. Jonathan Franzen vs. the late Christopher Hitchens? Richard Dawkins vs. Cornel West? Neil deGrasse Tyson vs. Zadie Smith? I seriously have no idea. I’ve been polluted.

Emily Yoshida: Witness as Lauren Conrad, golden child of reality television, backed into a corner by The View’s tag team, pauses on the razor’s edge before lobbing the first stone at the glass house she has just vacated after quitting The Hills in 2009. Watch as the pieces slowly click together and it dawns on Joy Behar and Sherri Shepherd that perhaps asking Lauren questions based on what they’ve seen on television is akin to asking Sean Bean how disappointed he is about the state of political unrest in Westeros. After this interview, poking holes in the show’s particularly heightened reality became a full-time fascination for the gossip rags that used to accept the show’s events as gospel, and the producers had no choice but to embrace the fictitiousness by the time the season finale rolled around in 2010. This is the birth of Christ or the Battle of Yavin for Hills aficionados, the moment when everything changed.

Victoria Beckham and Emma Bunton on The Daily Show (2000)

Bill Barnwell: There are a litany of contentious Daily Show interviews, many from the early days of the Jon Stewart era. (No video is believed to exist of the Craig Kilborn epoch.) Stewart and his shocking amount of hair battled the likes of a wildly uninterested Tori Amos and an impossibly stoned Val Kilmer to entertaining five-minute segments. Truly the best, though, was the October 2000 interview in which Victoria “Posh Spice” Beckham decided that she’d taken enough barbs for one press tour and decided to tell Stewart how comedy works in England. Truly one of the great IDGAF swings in talk-show history.

Incredibly, Lopez is responsible for only about 15 percent of the awkwardness in the exchange.

Steve Martin as “The Great Flydini” on the Tonight Show (1992)

Dan Silver: I was too young to fully grasp what Johnny Carson meant not only to TV, but to general pop culture when he retired in 1992. But being the son of a father who worshiped the man and always woke me up on evenings when guests like Don Rickles or Robin Williams were on, I did understand that something special was going on during Carson’s final days on the Tonight Show. The episodes leading up to the final good-bye (on May 22, 1992) were like a late-night TV history crash course, a menagerie of the who’s who and “who was that?” of comedy. And, school nights be damned, my dad allowed me to stay up late for the entire month of May to watch everything unfold.

This Steve Martin bit killed me, and still does. The opera puppet juxtaposed with Martin’s face at the end will stand the test of comedy time. I’ve since learned a lot more about the infamous inner workings and indicators of Carson’s Tonight Show, and now appreciate this bit on an entirely different level. It’s a throwback Tonight Show moment — one of Johnny’s favorite guests, a big star, who was ostensibly only appearing on the show to honor and entertain the king. And speaking of indicators, the cutaways to Carson holding back laughs at the end is as big of a seal of approval as any comedian could have ever asked for.

Well, This Is the Worst Thing Ever: Actresses Without Teeth