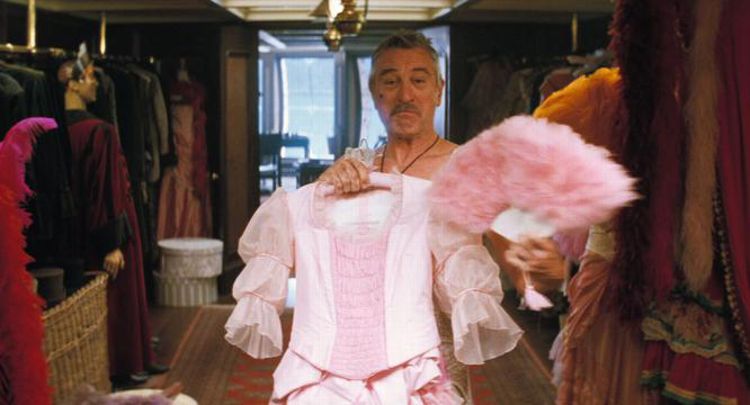 OK, so the jury is still out on The Family, apparently, and we’d like to be optimistic about it because life is just less of a bummer that way (hey, it’s directed by Luc Besson! That’s kind of interesting, right?), but as enjoyable as Silver Linings Playbook was, no one film could ever blot out the legacy of badness that has been Robert De Niro’s career for the past 15 years, give or take. This week we salute, nay, celebrate that badness with some of the most notable lowlights of the actor’s late career.

Sean Fennessey: James Mangold’s not-bad-but-desperate-to-be-great small town crooked police story looks like a duck and quacks like a duck and whoa look how fat Sly Stallone got. Stallone’s performance as a dim, lumbering, half-deaf local sheriff is meant to be a physical homage to the hell De Niro put himself through for Raging Bull. So there’s a sick joy in watching De Niro show up as an angsty I.A. agent trying to lock up the bad guys that run the town Stallone oversees. It’s an odd movie that never quite gets going — I remember it mostly as an early beneficiary of the Miramax pre-release hype machine. (It also has one of the great late-’90s casts, including Edie Falco, Janeane Garofalo, Peter Berg, Noah Emmerich, Malik Yoba (!), Method Man (!!), Debbie Harry (!!!), Paulie Walnuts, and Michael Rapaport.)

But it has a special place in my life. This scene is a familial hallmark, in that anytime I see my brother, within 20 minutes one of us will interrupt the other mid-sentence and howl, “I gave you a chance and you bleeeeeeeewwww it!” We do this for no reason other than recalling the weird energy of a half-spent De Niro, stuffing a turkey club into his mouth, and ever so briefly regaining the nut-bar intensity of roles past.

Mark Lisanti: OK, so the end credits of each installment in Satan’s Cynical Holiday Ensemble Movie cycle should be a crawl of dollar signs instead of SAG card holder names, but that doesn’t mean every single otherwise credible actor who cashed this paycheck shouldn’t forever bear the stale January 1 vomit stain of their participation. De Niro’s in this trailer for such a vanishingly brief amount of shame-time that you get the feeling his contract mandated the shot at 2:10 in, where he appears to be weeping for the loss of his standards. Or, you know, for the super expensive saltwater infinity pool filter that keeps clogging. It could be either thing. They’re both very real and relatable problems.

He is, however, the last person you see in this teaser. That seems pretty fair: You do the one-day-for-a-million-bucks-shoot crime, you do the final-sad-image-in-the-trailer time.

The Adventures of Rocky and Bullwinkle

netw3rk: De Niro reprising his “you talking to me” bit from 1976’s Taxi Driver in 2000’s The Adventures of Rocky and Bullwinkle is the film equivalent of a former athlete selling his championship ring. The only positive to this scene is this: Hopefully the children exposed to this didn’t get the reference, saving them from being bummed out by the sight of one of our greatest actors debasing one of his greatest roles. When De Niro appeared on Inside the Actors Studio in 1998, he demurred when host and former Parisian pimp James Lipton asked him to say the famous line, saying that people are always asking him to repeat it. So what changed? My theory: In 1999, De Niro was facing the prospect of an expensive divorce and custody battle (he and his wife would later reconcile), causing him to looking around for some paychecks, which he obviously found. Bummer.

Chris Ryan: You know what makes Bad De Niro bad? When he tries to do Good De Niro. I have no problem with someone going after a paycheck, but do you really have to grave-rob one of your best performances to get it? Rocky and Bullwinkle is what it is, but when De Niro puts on the “haggard cop” leather jacket and invokes Midnight Run‘s Jack Walsh, things just get sad. Special shout-out to 15 Minutes here. Whenever you can get the director of She’s the One and the star of Deer Hunter engaging in the double-LOL-whammy of coin toss humor and the old, “Get in the car … oops I’m driving away” prank, the best thing you can do, as a director, is roll film and get out of the way.

Dan Silver: I think I’m one of the few people out there who actually liked this movie. It’s about 72 percent successful in its attempts to be a modern-day Princess Bride. Now it may be my love of all things Matthew Vaughn, Neil Gaiman, and Mark Strong clouding my judgment, but this is an endearing watch … except for the De Niro moments. He’s so over-the-top in his role as Captain Shakespeare (yep, that’s his character’s name) that a look of disbelief, and pity, is almost visible on the faces of the performers sharing screen time with him. Most of the other actors in Stardust attempt to find solid and relatable ground for their characters, but not De Niro. He’s pure caricature, and he somehow found a way to out-hyperbolize a film that’s narrative is rooted in a magical fantasy world peppered with witches, fallen star-people, half-human half-animals, ghosts, and flying pirates.

Emily Yoshida: I know this one goes back a little further than what’s officially considered the beginning of the Bad De Niro era (it was 1994; Casino and Jackie Brown were still yet to come), but I think this may have been the moment that signaled to Hollywood that Bobby D was down for just about anything. I don’t know if Kenneth Branagh was just popping some antique opiates from Lord Byron’s stash when he went about casting this thing, but not even De Niro’s half-stitched-together mouth can hide the bizarre New York inflection in a line like “Did you ever consider the consequences of your actions? Whats’amatta with you? Are you stupid?”

Behind the Scenes: TriBeCa Film Festival Spot on Fox

Rembert Browne: I don’t like the idea of celebrating DeNiro, the “bad” actor, but what I love is Robert DeNiro, “man with a bad attitude when he’s acting and occasionally when he’s simply being Robert De Niro.” I don’t know who this guy telling De Niro how to modulate his voice thinks he is, my guess is that this was the last time he ever spoke. To anyone. Ever.

Bryan Curtis: In December 2010, I drove to a movie theater and saw Little Fockers. I’d like to say I was driven by hipster-ironic curiosity, or that I was an advance scout for Grantland’s upcoming threequel bracket. Actually, my mom wanted to see it. She’d already come to True Grit with me and cringed through the whole thing. I love my mom. So we went.

The Mom/Bryan trip to see a crappy studio comedy has now become a holiday tradition, exercised most recently with the appropriately named The Guilt Trip. Like I said, I love my mom. I don’t mind. My problem is, as soon as I leave the theater, I have no memory of what happened in any of these movies. I’d prefer to carry them around for years like old war wounds. (“Let me tell you, son, about Krippendorf’s Tribe and Grumpier Old Men” — actual examples, by the way.) But it took Wikipedia to remind me that Little Fockers was about boner pills, a heart attack, and Jessica Alba.

My other problem — and now the memories are flooding back, like an ancient childhood trauma — is that I hadn’t seen the first two focking movies. Little Fockers, even its makers could agree, was an attempt to put Ben Stiller, De Niro, and other notables on the same patch of earth and squeeze trace amounts of mirth out of a comic premise that, some time ago, was less stale. I didn’t know the premise.

Little Fockers made $310 million. In conclusion, I love my mom.