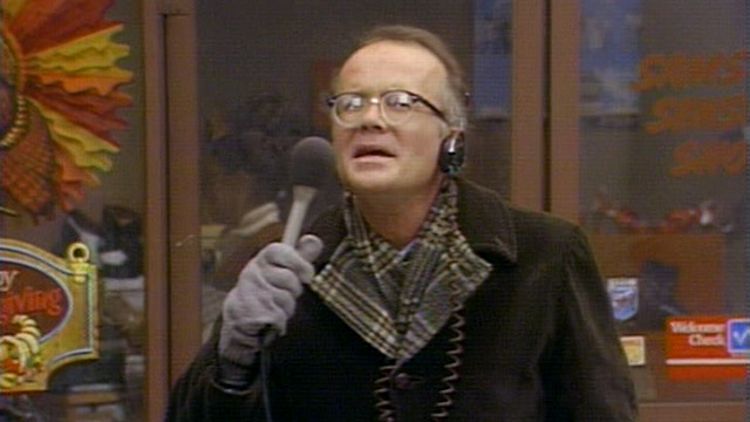 This Thanksgiving, the HOF is sending you off on your holiday weekend with a new appreciation for the winged beasts you are about to cook and devour with your loved ones. Turkeys are long-suffering, turkeys are dangerous, turkeys are full of secrets. They love, they laugh, they lay the smack down. Enjoy yours tomorrow conscientiously and with gratitude, and have a happy Thanksgiving!

Charles P. Pierce: Talented actors will labor their entire careers just to read a line as perfectly as Gordon Jump reads, “As God is my witness, I thought turkeys could fly.” And 30-odd years later, a million Facebook posts are born every fourth week of November. Outside of The Mary Tyler Moore Show’s “Chuckles Bites the Dust,” this is the single most indelible sitcom episode of the second half of the 20th century, and Seinfeld me no Seinfelds. But we should not let Jump’s genius blind us to Richard Sanders’s quintessential performance as Les Nessman. From getting rousted by the shoe store guy, to his blow-by-blow of the disaster itself (“The turkeys are hitting the ground like sacks of wet cement”), to the dazed coda he puts on the whole business (“It gets pretty strange after that … It was almost like they were … organized“), it’s clear he earned every damned one of those Buckeye Newshawk Awards.

Tess Lynch: I realize that this angry bird is a grouse, not a turkey, but they’re close relatives and they’re both assholes. Their methods of attack are the same: They stalk you, run at you, harass you, bite you, and make you feel both afraid and foolish. And though I easily could have found a video of a turkey pulling these same maneuvers, I like this one because the bird’s victim (a Swedish reporter) looks extra silly in his argyle sweater and the tension is heightened because the battle takes place in the middle of the road. At certain points during the clip’s two minutes, it actually looks like he’s wondering if it would be worse to die of turkey bites or to be run over by a giant truck (which I’m pretty sure the grouse screams at). This is not in English, but I swear that just after the minute mark the reporter actually tries to reason with the bird. This sort of works, because [SPOILER!] the bird tries to murder the camera guy instead. This helps me shed my omnivore’s guilt. My roaster was probably a mean, cranky criminal anyway.

Zach Dionne: To call this the greatest video ever would be trite. What we’re witnessing is the best moment in this man’s life.

Masters of Sex: Turkey Subjects No. 204

Mark Lisanti: It’s amazing how closely the mating ritual of the turkey mirrors that of humans: the slow and sensual-but-perfunctory tango as partners choose one another; the immediate taking of positions upon the dance floor, modesty be damned, to join in coitus; the near-total stillness of the male after he mounts, offering little more than some involuntary feather-twitches and the gentle wave of a wattle; the polite encouraging of the female, urging her lover on in his solid minute of performance; the respectful silence of the nearby crowd of friends, who do their best not to stare but can’t help discreetly craning their necks for an awkward peek or two at the couple; the shudder of completion and the hasty dismount; the avoidance of eye contact as the male, puffing out his breast in an overcompensating display of confidence, quietly tries to tell himself the encounter was mutually satisfying.

Indeed, it’s going to be a bit uncomfortable to eat these majestic birds after studying their lovemaking and discovering how much we have in common. At the very least, take a moment of silence to remember the beautiful thing we’ve all shared here before picking up the electric carving knife. We owe them at least that much.

Brian Phillips: The best part is how happy the guy is. I mean he’s just tickled, deep down in his mustached soul. There’s the governor, fresh off delivering her annual show-pardon to a Thanksgiving turkey, and now she’s making some remarks to the press, doing that lazy-river-of-English thing she does, drifting further and further away from her semantic inner tube — whoops, almost caught it; nope, there it goes around the corner; good thing the ride’s so slow — and he’s just part of the background, and he could not be digging it more. Look at those sly little glances back at the camera. He’s almost flirting with us.

And yeah, you know what? Maybe it is a little weird that he’s back there mechanically slaughtering turkey after turkey, dipping each one upside down into some sort of purpose-built large-fowl-annihilator that, if I’m reading the cues right, seems to include a blood trough to convey excess leakage. Maybe that “strikes the wrong tone,” juxtaposed as it is against the sentimental turkey-sparing that’s ostensibly the purpose of the governor’s visit. (“… plans like that, to govern this state, and building this team, that is continually, uh, being built … so in my role as governor, that’s what my plans are all around …”) Doesn’t matter. Joy falls where joy falls, and this cheerful killer of dinners is relishing the crap out of the chance to practice his craft on local television. Do your thing, strange guy. Literally, of course, but also figuratively, you’re what this crazy holiday is all about.

Rembert Browne: This clip, titled “President George W. Bush Turkey Bowling,” is slightly misleading. Because it was really “then–Texas governor George W Bush Turkey Bowling.” What’s turkey bowling? It’s when you bowl a Butterball turkey into 10 liters of cola, because of course it is.

A line by the host, before W. prepares to bowl: “This will be the death of any thoughts this man ever had of being president.”

But then he did. Probably because he knocked down nine Coca-Cola pins. And probably picked up the spare, just like any future leader of the free world would.

Holly Anderson: Doesn’t make a whole lot of sense, even in the context of the episode, but take heart: Patrick Swayze Christmas is just around the corner.

The West Wing: The Pardoning of the Turkeys

Patricia Lee: Because the pardoning of the turkeys is a real thing and this is possibly one of the best scenes from The West Wing.

Emily Yoshida: I came in skeptical about what tale Butterball hotline operator/Thanksgiving savior Carol Miller could possibly tell that would qualify as “awesome,” then just as it started to get good (“People leave things inside turkeys …” [swipe cut] AHHH NOOO WHAT DO THEY LEAVE INSIDE A TURKEY THOUGH) the sound quality started to rapidly deteriorate. Do I think this is an accident? No. Some turkey secrets are too dangerous for this world — mostly regarding if/where one can procure “turkey spray.”

(Shrugs shoulders, puts on toque, and skates to the poutine store.)

Anyway, here’s a giant “turkey” (which actually looks more like the love child of the Cookie Monster and the San Diego Chicken) hatching from an egg on a wrestling pay-per-view, then awkwardly dancing with Mean Gene Okerlund for like 45 minutes. YOU’RE WELCOME.