We Went There: Drake’s Would You Like a Tour? at Staples Center 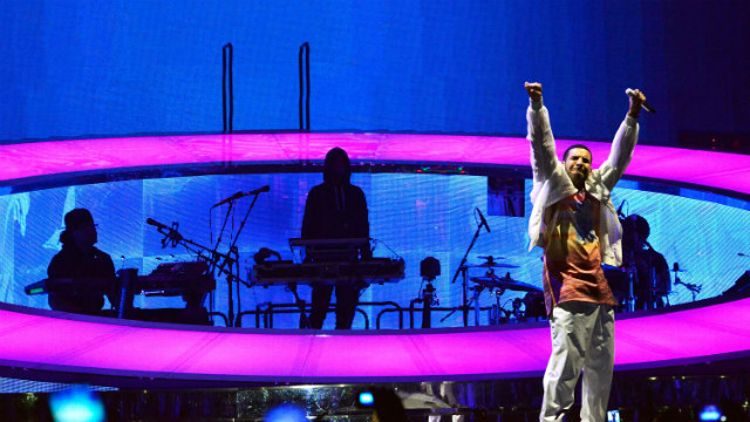 Reason for overattention to merch/pizza-related matters on representative from Grantland dot com’s part: Miguel-paragraph-writing avoidance. But, OK. Miguel: Enthusiastic nonfactor. Wears feathery fringed leather jacket, like raven-god, over T-shirt spray-painted with “ART GANG”; alternates James Brown spin/shuffle/split footwork & contrived “rocker” poses. Thought: ART GANG is probably not very dangerous gang. Mohawked white guitarist takes encyclopedically varied solo, as if auditioning for job with Chili Peppers. ART GANG means never not letting that guy take solo. For “Pussy Is Mine,” Miguel produces own electric guitar, plays barre chords. Miguel as guitarist: unremarkable and therefore charming. Miguel expresses desire to be who the ladies think about in the event they go home alone tonight and touch selves in bed. Miguel exhorts dudes who’ve had sex to Miguel’s music to make selves heard. Miguel describes self as audience’s “autopilot wingman.” Miguel changes into jacket covered with rock-band patches — Zeppelin, Stones tongue, Prince glyph. Miguel: talked into whole “rock” thing by stylist? Makes reference to guy down front w/ arms folded, SMH-ing at Miguel because “this motherfucker got on a leather and a guitar on his back.” Sound mix is unrelenting, sonic details overly bright; “rock” portions of program perhaps unintentionally evocative of, like, Crowded House or something? But better than that sounds? Miguel: Also better than he sounds? Jury: Out.

Mom remains in seat next to daughter. Daughter leans away from her as if from unhygienic person on bus. In VIP area, Kris Jenner bobs exuberantly to “N----s in Paris.” Moms: Embarrassing.

Extent to which any of these issues seem to matter to anyone in Staples Center who is not the representative from Grantland dot com: Zero percent. Their enthusiasm/Drake’s enthusiasm for their enthusiasm quickly wears the representative from Grantland dot com’s resistance down. Hit songs also help: “We can do this all night, I got like 100 of these [hit songs],” Drake says, after “Pop That” & “I’m on One” but before “Versace” & “Fuckin’ Problems” & “Up All Night” & “The Motto” & “HYFR” & “Started From the Bottom” & & & & &. Also: Cameos, well-placed set list–wise (anytime show’s tone leaned toward Drake Mopes Handsomely Around His Circular Fortress of Solitude) and well-chosen, illustrating Drake’s genius for subgenre triangulation. “Love Me” feat. Future. “Make Me Proud” feat. Nicki Minaj, followed by Nicki Minaj just barely finishing sentence “I love you, Drake” before being whisked from stage via trapdoor/elevator. Finally, papal visit from Snoop Dogg, intro’d by Drake as “one of the heroes of this shit” and “one of my favorite people in the world” (& later, “one of the most important people in the world,” full stop). Point at which Snoop’s extended cameo began to feel like Drake kissing L.A.’s ass unnecessarily: Between “Nuthin’ But a ‘G’ Thang” and “Drop It Like It’s Hot.” Drake’s demeanor while performing “Drop It” alongside Snoop: Joyful, dorky, contest-winnerish.

Drake’s inherent & unconcealable dorkiness: Vitally important. Sometimes a saving grace. Negates, for example, potential awkwardness of moment when female audience member is brought up through giant O and onto stage, to be sung to. In L.A. it’s Gina, white woman, in flowered pants and canary-yellow sweater. Drake, to Gina: “Come on down, canary yellow, canary yellow.” Feeling her sweater: “Is this cashmere? It’s soft.” Like a 10-year-old would say it. Drake says he’s been having problems with “these young girls” lately, needs someone who’s more on his page, maturity-wise. Not sure how Gina feels about this; Gina looks younger than representative for Grantland dot com, for example. Drake, singing to Gina: “You’re a good girl and you know it/You’re the only cashmere sweater I see.” Spoken: “Bring it in for a hug, Gina. Bring it in for some love, Gina.” Gina brings it in. Sung/spoken: “Gina, you kind of look like Martha Stewart tonight, but it’s all good.” To Gina’s back as she’s exiting: “Gina, those flowered pants are based. I would kill them shits if they came in men’s.” After Gina exits stage, to audience: “What Gina doesn’t know is, I would put this young thing in her life.” Removal of flowered pants is discussed, performance of “Worst Behavior” ensues. Entire moment skirts creepiness/Gina-mockery due entirely to Drake being dork — “It’s soft” does all that on its own.

Next passage of show = basically writ-very-large Gina moment. Circular catwalk descends from Staples ceiling, stopping 20 or so feet above center court. House lights up, even on nosebleed seats, as Drake raps “305 to My City.” Standard crowd-engagement tactics. But then: “305 to My City” beat loops at medium volume for a long, long time as Drake works crowd. Works entire crowd. “I see you, baby, with the jean jacket on … I see you right there in the white jeans and the green shirt,” etc., etc., as catwalk raises and lowers, permitting Drake to see people in box seats, cheap seats, floor seats. I see you. I see you. I see you. Despite talking fast, Drake cannot describe everyone’s outfit. Reserves “Y’all on a date tonight?” level of actual interaction for select few. Degree to which this stops people (with their brown dress on or their white shirt on) from entering absolute rubber-legged freakout mode when Drake seems to be acknowledging them: Zero percent. Whole scene is like (imaginary) Key & Peele sketch about OCD rapper forced to give entire packed arena individual shout-outs before continuing show; whole scene is also, in its relentless positivity/gratefulness/goofy impracticality, suggestive of what Staples Center–size Lil B show might be like. Grantland dot com representative has read descriptions of this portion of show; was not prepared for its power and simple sweetness. Drake: May at end of day just want to hug entire world? Wrap entire world in world-size cashmere throw? Imagining this impulse as future Drake motivation, representative from Grantland dot com is back on board with Drake. Come on down, canary yellow.

Filed Under: Drake, Future, We Went there