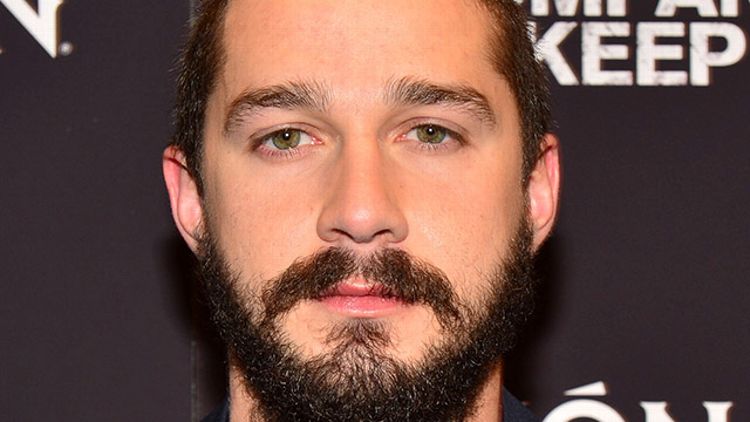 Child star, truth-teller, beef-stewer: Shia LaBeouf is BACK, y’all. This Friday, if you are blessed enough to live in a metropolitan area in which it is screening, you can see Charlie Countryman, a sex-and-violence-packed crime film that Variety calls “profoundly unnecessary” and the Village Voice declares “an ode to an ideal no one over 16 actually believes.” But all the Beoufheads out there know it’s Act I of the Great LaBeouf Art House Comeback of 2013 (soon to be followed by Lars von Trier’s highly anticipated, sex-filled, YouTube-breaking Nymphomaniac). Let’s get amped for the coming revolution with some clips of Shia at his best.

Just so you know what you’re in for:

Yo, yo.
I’m throwing my fist like I’m playing some hockey
Keep talking crack like I’m Jeremy Shockey
Yo, Craig Kilborn, he can’t stop me
Is it just me, or is this guy cocky?

Chris Ryan: This is LaBeouf, high on uncut truth serum, looking like he just lost the part of Noah to Russell Crowe and hasn’t bothered to change his hair out of protest. He’s telling an incredulous David Letterman about why he left the play Orphans, because of issues he had with costar Alec Baldwin. THIS DUDE SHIA IS VIBRATING WITH THE TRUTH. Like, he knows he’s getting the “David Letterman is f-ing with you” treatment, and he doesn’t care. He’s here to tell his side of things. The only thing crazier than this appearance is the audition tape he made for Orphans. Have fun watching a 60-minute video of this guy in a hooded sweatshirt. I know I did.

Bryan Curtis: My favorite thing about LaBeouf is his journey through fanboydom, a villain-to-hero path that tracks David Brock’s relationship with liberalism and Johnny Damon’s with the New York Yankees. Let’s start at the top. A number of years ago, it was announced that LaBeouf was going to be the demographically correct face of two Gen-X franchises: Indiana Jones and Transformers. The resulting movies — four total — turned out to be pretty terrible. LeBeouf got a lot of the blame.

Then something weird happened. Instead of ascending into the Michael Bay “Who, me?” zone, LaBeouf admitted Kingdom of the Crystal Skull was terrible. “I feel like I dropped the ball on the legacy that people loved and cherished,” he said.

LaBeouf even took the blame for some of Crystal Skull’s most awful moments: “You get to monkey-swinging and things like that and you can blame it on the writer and you can blame it on Steven [Spielberg, who directed]. But the actor’s job is to make it come alive and make it work, and I couldn’t do it. So that’s my fault. Simple.”

He continued: “I just feel like we were trying to enforce innocence on an audience that wasn’t willing.” I’m not sure there’s been a neater crystallization of why George Lucas and Spielberg’s later movies didn’t work.

LaBeouf’s rebellion was a really interesting moment for fanboydom. Not only was the star of Indiana Jones mouthing some of the complaints that had been cluttering up comment sections for two years. He was doing it at enormous career peril. Who was the last actor to bad-mouth a Spielberg movie that he’d just been in?

There was some grudging admission in some quarters that maybe LaBeouf wasn’t so bad. As one Ain’t It Cool commenter noted, “So he’s right and he sucks.”

Harrison Ford later said of LaBeouf: “I think I told him he was a fucking idiot.”

Fast-forward to last August. LaBeouf took another step on his journey in an interview with the Hollywood Reporter. He said he was sorry about ragging on Crystal Skull. But he also said he was disillusioned by the whole dehumanizing blockbuster sausage factory. “[Spielberg] told me there’s a time to be a human being and have an opinion, and there’s a time to sell cars,” LaBeouf said. “It … killed my spirits because this was a dude I looked up to like a sensei.”

Spoken like a true fanboy. Notice LaBeouf didn’t just say, “We ruined Indiana Jones.” He got into the deeper, ickier feeling — which started in earnest with the Star Wars prequels — that our director-heroes are basically action-figure salesmen, and they are salesmen even when what they are selling is shit. The actor puts on a cockeyed grin and goes on Access Hollywood, and the moviegoer schleps to Target … and, well, LaBeouf wasn’t having it. In the same interview, he announced he was making art films.

I’m not sure I want to see any of those art films. But, dang, I respect his honesty. LaBeouf started off as the despoiler of fanboy culture and wound up the despoiled. In four years, he completed a journey that took a lot of us decades. As Indy once said, “It’s not the years, honey, it’s the mileage.”

Tess Lynch: I want to remember you this way, Shia. As you were in Holes. Splooshing in the rain.

The Yes/No Show With Shia and Jessica Chastain

Sean Fennessey: Imagine a friendship between Jessica Chastain and Shia. Not a junket friendship, made convenient by the press duties required to sell Lawless. A real bond, forged over a love of The Lawnmower Man and Chastain’s three-legged dog named Chaplin, and Shia’s Transformer penis. Imagine that.

The Company You Keep

Charles P. Pierce: Shia is a young and ambitious reporter. You can tell this because he wears glasses that look like twin Motorolas circa 1959 and what may be a four-day or 18-month stubble. It’s hard to tell. Also, a raincoat. He is running down Robert Redford in Redford’s second ’60s underground-radical movie, the other being the very superior Sneakers. Shia goes up against Redford, Susan Sarandon, and Julie Christie in this movie. If Shia were a college basketball team, he’d be South Carolina State.

Zach Dionne: If I’m right and this 2.5 million–times-viewed interview came out near the time of Transformers, Shia and Megan Fox are about 21. They’re goofy. Fox calls a pre-beard Shia “Shyla,” but I think that’s by mistake. Shia sings a little falsetto Frampton, tries out some early Spielberg trash talk (“He eats babies! WHOLE babies”), and then the two smooch. It’s weird. I like the “Shyla” part though.

Emily Yoshida: Aside from being the nakedest (and kindest to butterflies) we’ve ever seen LaBeouf, was this the most actory thing a Hollywood actor has ever done? The performance artsy gestural dance moves, the abstract school play set, the man bun. The man bun! But mostly the nakedness. An inventive alternative to the child star rite of passage that is off-Broadway Equus run. Well played.

Shia Staring at Me in Burbank

Mark Lisanti: Others in this Shiapalooza will opt for the flashier LaBeouf moments: your contentious faceoffs with talk show hosts, your Holes, your doomed involvement with the Indiana Jones movie that has since been erased from the historical record because it was an affront to the crystal-noggined space-gods who will soon return to claim their dominion over our failed race. Maybe we will even see a Disturbia clip in here. It’s impossible to know where a conversation about LaBeouf is going to take you; you think it’s going one way, then boom, you wake up inside a makeshift “circus tent” in Griffith Park to find a pack of balloon-twisting grifter-clowns rummaging through your pockets while screaming at you to turn over all your Bubble Yum right fucking now, they need to get their chew on.

For my money, there is no video segment on the Internet that captures the Shia Mystique more efficiently than the 29 seconds of the GoPro footage you see above. You will learn more about the enigmatic LaBeouf in this half-minute than you possibly could in the five hours of pathological raw-dogging we will one day witness in Nymphomaniac; as a revealer of souls, Lars von Trier has nothing on the motorcycle-riding auteur whose unexpected pan to the driver’s-side window of an idling Silverado lays all bare for the world. The rolled-up sleeve, the dangling arm, the piercing, vaguely menacing stare that understands everything and nothing all at once. It’s a moving snapshot of the unknowable suddenly made known. It’s a masterpiece.

Von Trier should throw all his cameras into the ocean immediately. He has lost. He had his chance and he’ll come away with nothing for it. He should have put a bed in the middle of an intersection of Burbank. It’s a mistake he’ll never live down.

Juliet Litman: Don’t ever forget where Shia started. He always finds a way.

Do You Like Prince Movies? Podcast: R.E.M., Thor: The Dark World, and the End of Blockbuster