You’re Either With Us or Against Us: The CMAs and the Country Music Family 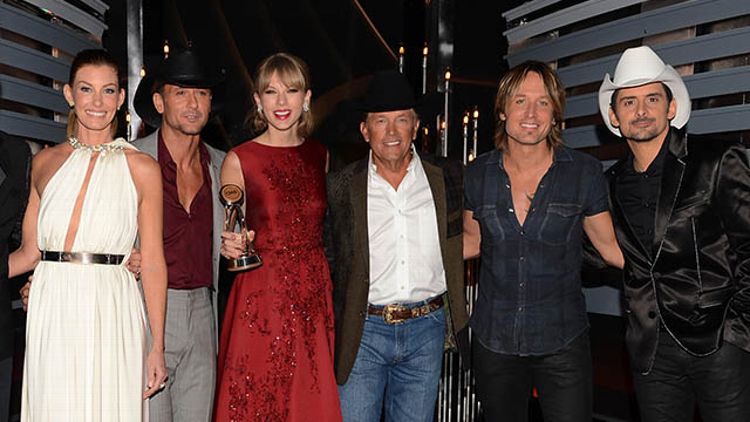 “Welcome to the family.”

This is how country singer Jake Owen responded after Pretty Little Liars actress Lucy Hale announced her upcoming country album onstage at the 2013 Country Music Awards in Nashville. It was a startling, cultlike moment, one that was in keeping with the tone of the CMAs, the biggest night in country music.

I tuned in to the CMAs with a knowledge of the genre just about comparable to its sports cousin NASCAR (I’m familiar with the big names, but not a single detail beyond that), so I didn’t really know what to expect from the three-hour show. For one, I certainly wasn’t expecting to watch it for three hours, and furthermore was not expecting to be captivated for the entire time.

But that’s what happens when you start out with a blackface joke.

On the surface, this sounds horrible, but reserve some judgment until you get the context. Hosts Brad Paisley and Carrie Underwood opened the show by addressing the issue of country music beefs, a subject everyone in the crowd understood but the casual viewer quickly realizes they are ignorant of (a recurring theme of the night). So they began singing a twangy version of War’s “Why Can’t We Be Friends,” and singer Kelli Pickler went around the room, giving country music’s elite “feud assignments.” Eventually she made her way to Darius Rucker.

The CMA equivalent of Tiger at Augusta National.

The initial thought that crossed my mind, as the crowd exploded in laughter? Am I supposed to be watching this show? Was I supposed to see that happen? Nope, was never supposed to find out about that joke. But that didn’t matter, because the country music family was pleased. But little did they know that was only the beginning, because blackface transitioned right into a Paisley/Underwood segment on Obamacare.

In case you missed those lyrics at the end:

“Obamacare by mornin’.
Why is this taking so long.
I’m gonna wind up with hemorrhoids.
If I sit here ’till dawn.

We’ll have cataracts and dementia
Oh this is getting on my last nerve.
Obamacare by mornin’
Over six people served.”

The roaring applause to this skit was even louder than blackface. You would have thought MLB-less Nashville had just won the World Series. Or Earth had just defeated the aliens.

There was no turning back on the CMAs now. I had to see this through. I had to learn more about this family. The country music family. Who they were with, and more interestingly, who else they were against.

For starters, it was clear Nashville did not operate on the Dom Toretto familial principle. (“You don’t turn your back on family — even when they do.”) The prime example of this last night: Miley Cyrus.

Destiny Hope Cyrus was born into country royalty. She was born in Nashville, her father is country singer Billy Ray, and her godmother is Dolly Parton. Her line is as country as it can get. Hannah Montana’s country roots began to lose hold in Hollywood, but she wasn’t a complete lost cause.

From a 2009 L.A. Times blurb on Miley’s appearance at the American Country Music Awards:

“Miley Cyrus … country? Apparently. Yes, she has Nashville roots, but Cyrus has always belonged more to Hollywood than to Nashville. Nevertheless, her ‘Hannah Montana: The Movie’ sees her making a slight country push, and now she’s performing on the ACMs, which has raised some questions in the country community: Is Cyrus actually going to country? Is this just a ratings ploy by CBS? Is her post-“Hannah” career move to go all Taylor Swift?”

It seemed like she was ready to regain that audience she was born into.

If it’s “with us or against us” in Nashville, Miley definitely now represents the latter. And that was evident throughout the CMAs, from the overwhelmingly frequent “twerk” mentions to the not-so-subtle clothing choices of the hosts: 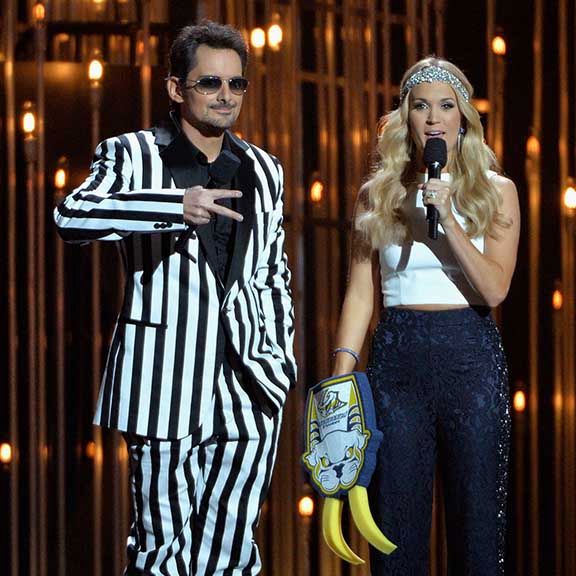 It was an all-out assault on Ms. Cyrus for three hours. But not even the outfits were the death knell. That came by way of a Swiftian double-edged sword.

First came the awarding of Taylor Swift (1989- ) with a pseudo-lifetime achievement trophy dubbed the Pinnacle Award (she’s only the second artist to get it in the history of the CMAs after Garth Brooks in 2005) and dedicating almost eight minutes to the crossover pop-star peer of Cyrus, via serenade, speeches from the country music illuminati council of elders (McGraw, Hill, Paisley, Urban, Strait, Rascal Flatts), video tributes (Mick Jagger, Justin Timberlake, Julia Roberts, Reese Witherspoon), and a speech from Taylor herself.

And then this statement, from Brad Paisley to Taylor, with the entire family watching:

“And I want to thank you from a grateful industry, for never once humping a teddy bear or gyrating with Beetlejuice. I really appreciate it. I know that’s not easy.”

Swift was being used as the model example of how to become bigger than country without forgetting your roots. How to occasionally leave the family but never do wrong by the family. She’s the example of the kid who leaves home for college, goes off to work elsewhere, finds some level of success, has new friends, but still comes home for the holidays as if things haven’t changed. And most importantly, as if she hasn’t changed.

It was a relatable moment, one many of us know well. Because we all know Swifts. Some of us even are Swifts. And the only thing that makes a Swift more impressive and laudable to a community is if there’s a Cyrus.

Because that’s how strong families, and communities, and mafias, and cults work. You’re either with them or against them.

I’ve spent a great deal of my life obsessing over hip-hop. One of the great debates of the genre is the issue of cultural appropriation, that schism that occurs when someone like Macklemore becomes the face of rap. The idea of “who’s allowed in” is a cornerstone of rap music and, in some ways, black artistic culture on the whole, because there is such a long history of creative embezzlement with the originators coming out with little to show for their work.

The opposite seems to be present in country. Because the issue does not seem to be who’s allowed in, but more how you behave should you decide to venture out.

Venture out, but come back. Have your musical Rumspringa, if you will. But if you leave and embarrass us, we’re changing the locks.

This notion of family isn’t all us-versus-them, though. Due to the tight-knit, insular nature of the collective, certain things simply matter more. And compared to other award shows, the winners at the CMAs seem to matter. When Taylor Swift, Kacey Musgraves, Kelly Clarkson, Miranda Lambert, and Carrie Underwood are all in a category for best female vocalist, it felt like the winner really was set to be the Queen of Nashville for another year. Bragging rights actually seemed to matter. So when Lambert won, followed by her husband Blake Shelton winning for the corresponding male category, it truly felt like they’d won more than a set of statues.

This wasn’t some Kendrick “King of New York” posturing. This was true royalty. Less a case of winning top honors and more like being crowned homecoming king and queen.

Looking at the CMAs, you’d think this was one big happy family. I’m sure it’s not, but like any powerful family, when the lights are on and people are watching, everyone puts their best foot forward in the name of the family. Everyone smiles for the portrait. Any notion that something is wrong is swept under the table. And what happens behind closed doors is knowledge reserved only for those in the family.

'American Horror Story: Coven': The Witches Still Aren't Quite As Fun As the Murder-Tenants and the Asylum Guests