‘American Horror Story: Coven’: The Witches Still Aren’t Quite As Fun As the Murder-Tenants and the Asylum Guests 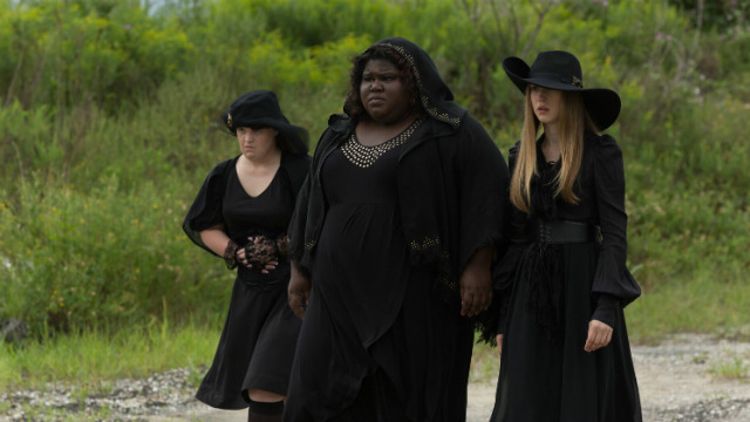 Yesterday, FX announced that it had ordered a fourth season of the miniseries franchise American Horror Story. This didn’t come as a surprise to anybody, of course, because to quote FX CEO John Landgraf, the show is “nothing less than extraordinary. Every year, [its creators and production team] create a riveting and brilliant new miniseries.” It’s gushy but accurate praise for a show that one-ups itself in the ratings with each new installment, wins Emmys and Golden Globes, retains a murderers’ row of talented and accomplished actors (although the cast has not yet been announced for Season 4), and pushes the boundaries of what can be shown on television beyond what any rational human would think possible (or marketable).

American Horror Story: Coven — the third chapter of Ryan Murphy and Brad Falchuk’s horror anthology — aired its fifth episode last night, and while it was the best installment of this season, Coven still gives me a diluted strain of Andy Greenwald’s current television ennui. Are the performances reliably brilliant? Oh yes, even more so than in Season 1’s Murder House or Season 2’s Asylum, in part due to the addition of Angela Bassett as a voodoo queen who splits her time between doing hair and writhing around with snakes while her eyes roll back into her witchy head. Does it push you to the brink of alienation with, say, scenes featuring a tongueless butler removing a corpse from a cabinet while waltzing around in a dress, surrounded by meticulously arranged spooky dolls? Indeed, it does. Is it crammed with themes both big and small, from racial tension to teenage sexuality to the repercussions of being a bad mother, or just feeling like one? Obviously — AHS has never been fluff, even though it has always been camp. So why, at a point during which the show is earning its best ratings of all time, do I sometimes feel it pales in comparison to its two predecessors?

Maybe it’s because what Murder House and Asylum had was the ability to produce actual scares, the kind that are hard to come across even if you tirelessly seek them out. (Hemlock Grove and The Walking Dead might have the capability to chill you, but they never stuck around just to give you nightmares, while AHS simply wouldn’t leave your consciousness long after the credits rolled.) I knew after watching the pilot that one of the aims this season was to lighten the mood a little, and wanted to believe that this would result in the perfect storm of laughs, blood, and shrieks. That formula is nearly impossible to get right, requiring meticulous orchestration and providing little wiggle room for mistakes that would send it into laughably bad or even offensive territory, but if anyone could do it, I thought AHS had a shot. Don’t get me wrong, it’s still one of my favorite shows to watch and by all measures a success. It’s just that its ambition grows with each season, and that doesn’t always mean an improvement on the last one for those who were enchanted with it from the beginning.

I could be in the minority here, of course, but one of the problems that I think exists for Coven that was absent from the other AHS narratives is that it’s even more of an equal-opportunity ensemble than Seasons 1 or 2 were. Whereas it was easy to choose your favorite plot line from the offerings of Murder House or Asylum (Evan Peters’s Rubber Man was a front-runner in the former, while Jessica Lange’s Sister Jude, the former boozy lounge singer turned nun, owned my gaze in Season 2), things get tougher when you’re splitting your focus between Kathy Bates as a slave-torturer trapped in a grave for more than a century and released into the present day as Gabourey Sidibe’s personal maid and Lily Rabe as a lonely necromantic who’s also a hard-core fangirl for Stevie Nicks. Lange plays her smartest diva role yet, Sarah Paulson mashes herbs with a mortar and pestle in a (so far) futile quest to enhance her fertility, and Taissa Farmiga is once again well cast as a savvy and sympathetic protagonist. That would all probably be enough, but then you’d be leaving out Frances Conroy’s frizzy-haired coven outcast Myrtle Snow, Bassett’s Marie Laveau, Jamie Brewer getting the most action she’s been afforded in the franchise so far as a sympathetic mind-reader, Emma Roberts exceeding all of my expectations as a bitchy, Lohan-esque starlet, and Denis O’Hare (the tireless mutilated blackmailer from Season 1) as a silent and perverted butler — and you couldn’t do that, because they’re all wonderful and compelling. There are no squeaky wheels in the cast, but it has more wheels than a millipede has legs. The talent is almost in excess.

AHS has always been an actor’s dream. The script allows for well-sculpted emotional monologues, parabolic character arcs, and, occasionally, swoony dancing sequences, plus there’s the benefit of being in good company (who wouldn’t want to fight zombies with Kathy Bates?). The writers and directors have a tougher task, however, because they’re charged with forming a cohesive collage out of divergent plot lines that hop from decade to decade and from one character to another; it grants them a huge amount of freedom, but also leaves them plenty of loose ends to tie together.

In this season’s case, one of the biggest challenges has been clearing space for exposition, especially when it comes to outlining the governing rules of Coven‘s breed of witches. That there is a “supreme,” the reigning most-powerful witch, is a given — we learn early that it’s Lange — but navigating the broom rules past that point is no easy task. Each of the witches has a unique power, but after only five episodes, it’s clear that each also has the ability to acquire more or lose existing ones; the supreme will have a successor who will assume her bag of magical tricks, which presumably includes all of the abilities of the other witches and more, as her own power dwindles along with her health. But if that’s true, why can Misty Day (Lily Rabe) revive the dead and heal the ill while the supreme herself can only do so selectively (and confusingly)? The supreme has the power to intimidate everyone she comes across, but can’t give herself a convincing face-lift, the one thing (well, besides eternal youth and vitality) she wants more than anything. Laveau’s powers seem to trump the supreme’s, but we only get a thin explanation of a tribal split to explain why she hasn’t dethroned Lange yet, or simply murdered her (the supreme is mortal, after all). And some young coven members — Nan (Brewer) and Zoe (Farmiga) — seem more cursed by their powers than, well, empowered. Why does it suck to be one kind of witch but not another? What’s the definition of “witch” in this context, anyway — what differentiates them from psychics or very capable hippies with recipe books?

Fine: Maybe that gray area is exactly the point. But if it is, those details and particulars should still occupy more foreground than they do, because that’s where the plot occasionally stalls. Where it excels is in exploring sticky mother-daughter competition and cruelty, female friendships, and the deep ache that results from refusing to let go of vanity when your physicality has rendered it useless. Coven is skilled at digging into the traits we think of as belonging to women, though they actually apply to us all: In the same vein as Mad Men, it’s about the struggle to hand control over to the generation that replaces you, how it feels to slink offstage and take a seat in the audience, your hips clicking as you descend the stairs. I’m disappointed by the fact that it buries the lede under so many zombie carcasses and more POV shifts than it has ever been able to boast, because it seems as if it’s writing its PhD on 11,000 topics in each hour-long episode. I never cried “Too much!” when the Nazis and the aliens featured into a single episode of Asylum or yet another demonic ghost-sibling crawled out of the jars of formaldehyde in Murder House, but, as unpopular people in college seminars like to say, “as a woman” I think I wanted this season to be no less scary, despite its emphasis on bustles and facials, than the previous ones. The humor has changed from the grotesque (brains on a plate) to a banter that includes TMZ references, and it interrupts the chills too frequently to let the haunting images of the doll butler or a shadowy, lusty Minotaur take full effect. There is an effort at being palatable and pleasant that was missing before, and while that Southern hospitality might make it an easier sell when you recommend it to your friends, that comes at the cost of elusive television terror.

I might be alone in hoping that AHS reverts back to a version of its original formula in its fourth season, so I’m going to assume that it won’t. Its specificity of place (despite the often wonky accents) and use of graphic imagery and language have remained, but I’d love to see it narrow its focus down to a few flawed and mysterious protagonists in a world comprised of untrustworthy visiting demons. It has already dealt with the themes of domesticity, institutionalization, and now the limitations of power (particularly female power), but it has left a few heavy stones unturned: cults, corporations, pharmaceuticals, the future, outer space, isolation, man versus nature (AHS: At Sea, because how terrifying would it be to get on a scary boat with Murphy and Falchuk?), politics. I don’t want Coven to be the sprint that exhausts its versatile formula, the hail of gunfire that leaves it empty and spent, with new viewers who expect it to allow them any room to breathe and giggle. The best thing that AHS could do to improve its already impressive ratings is to compromise, but that would leave it without the ability to scandalize and surprise us. I hope that aspect of unpredictability remains, because it wasn’t available anywhere else. It was, basically, what made AHS unique: It dared you to stop watching every time, but it was so good that you simply couldn’t. It was what monsters should be: ugly, bizarre, and complex.

Coven‘s characters, though they sure do make a great Wednesday-night parade, crowd the dark closets and sub-bed areas so much that you can’t study them each individually, examining their scars and bloodshot eyes. I’ve grown to love them, sure, but the beauty of the miniseries’ repeating cast is that we can all expect to see at least a few of them next season, wearing different masks. Coven may not represent AHS‘s silver age, but rather a quick detour from its strange and singular freeway, with all of the familiar truck stops of Lange in a black get-up, mussing her hair and reeking of misery. It would be silly to complain about that, like sending back your blini because you expected six extra orbs of caviar on top of it. The beauty of AHS‘s style — miniseries meets theater coop — is that you never know just what you’ll get. You can give it permission to disappoint or offend you and stick with it for the long haul just because it refused to ever play by anyone’s rules but its own.

Will Smith Takes His Rumored Open Marriage to the Next Level ... and More Salacious Tales From This Week's Tabloids