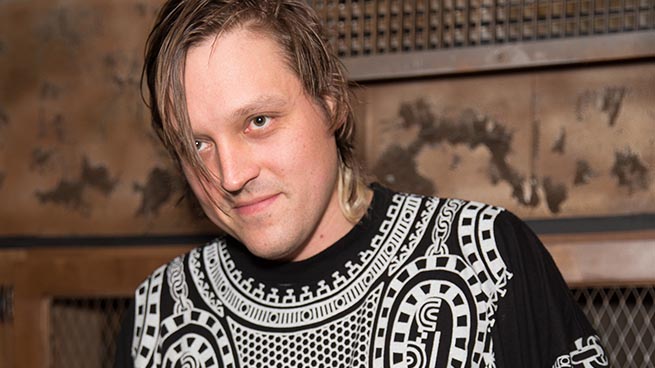 In 2007, Win Butler stole a guy’s basketball. Remember? It was a summer day, at the Cal Berkeley gym, and the poor fellow, one Chris H., was just trying to get his pickup on when he had the grave misfortune of running into the Arcade Fire anthem minter. A hard-hitting blow-by-blow is provided in Chris’s seminal blog post, “Win Butler needs to give my basketball back,” but here’s he long and short of it:

Win Butler was shooting around on one of the courts. I asked Mr. Butler if he wanted to play. He declined so I asked him if he could move off the court because we were starting a full court game. He angrily refused. He told me, and this [is] a quote:

“I paid too much damn money to get in here and I’m playing on this court.”

After I finished playing I realized my basketball was missing. I remembered last seeing it on the court where Mr. Butler was shooting around with a few other guys.

I went downstairs to the front desk to ask if anyone had turned in a ball. I described my ball to the young woman working the desk. I told her that I had drawn stars on the ball so nobody would take it by mistake.

She said: “The lead singer of Arcade Fire took your basketball.”

In the years since the incident, as Arcade Fire’s star has risen to bright new heights, we’ve heard no shortage of stories involving Mr. Butler and basketball: The dude loves to ball, and he has Matt Bonner’s cell phone number to show for it. But, almost as an explicit counter to his early dastardly behavior, Butler-and-basketball stories always involve charity, joy, fun, good sportsmanship, and a telling lack of basketball thievery. HMM. HOW CONVENIENT. VERY INTERESTING. IT’S NOT LIKE HE’S CONSCIOUSLY AND DESPERATELY ATTEMPTING TO HIDE HIS TRUE BASKETBALL NATURE AT ALL.

Fast-forward to this weekend. The place: Auckland, New Zealand. The occasion: massive music festival Big Day Out. A recreational basketball enthusiast — let’s call him Sherif Hassan (because that’s his name) — is minding his own business on the public courts of good ol’ Auckland when guess who rolls up? Big Win Butler, of course. And he’s got Pearl Jam’s Jeff Ament along for the mayhem. Both bands are playing Big Day Out, and so Win and Jeff decided to get their Down Under hoops on when they had the chance. And then what happened?

Friends, I think you can guess.

As our man Sherif later explained to radio station Triple J [via Pitchfork], it got bad, fast.

“[Ament’s] aggressive, I’ll tell you that much,” Sherif joked. “He broke my nose. It was actually the last play of the game — the one time I decided to play proper defence. All I heard was Win going off about how the rules are rubbish down here, and throwing balls around and chucking a bit of a hissy fit.”

OK now, before you try to get me to redirect my rage at Jeff, here’s a bit more information for you:

“It was worth it,” [Sherif] continued. “[Ament] got us all tickets to the Auckland BDO and hooked us up with backstage passes. I got to meet Lorde, Major Lazer and Mac Miller — Lorde was just chilling backstage, it was weird seeing her in person. I got a photo, it was awesome. We got to the front of stage for Pearl Jam, and [Pearl Jam front man] Eddie Vedder gave me a shout out.”

Ament did his part! He made, um, amends! But where was Win, the guy whose (dare I say) violent distaste for Australian-rules basketball — throwing balls! chucking hissy fits! — was quite clearly directly responsible for creating the dangerously out-of-control environment that led to poor Sherif’s nose being smashed in?

Look, I’m not one to speak out of turn.

And far be it from me to cast aspersions on one’s character.

And, sure, the exact proceedings here can’t quite be accounted for.

But where was Win Butler?

Where was Win Butler?

'The Bachelor,' Week 3: Learning to Value Your Time (and Crush the Will of Your Enemies)