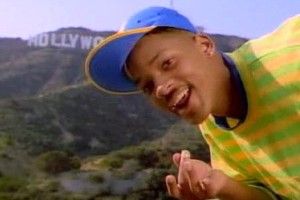 Will Smith has spent the last few years, it seems, not being particularly interested in his “Only Real Movie Star Left” title belt. After 2008’s critically bashed weepy Seven Pounds, he laid low, choosing instead to mastermind the careers of his children Willow and Jaden (a move that, considering their young ages and endless reservoirs of blank-eyed professional entertainment wherewithal, will certainly reverberate up to and throughout the end days). When Will did launch a comeback, earlier this year, it was with Men in Black III, a safe bet that paid off to the tune of over $600 million in international box office. He’s now shooting another movie with Jaden, this one an M. Night Shyamalan joint called After Earth that you’ve probably already decided you hate. (In the meantime, he’s been spending a lot of quality time with Maybach Music Group.) I guess my point is, who knows what the hell Will Smith is thinking these days? So when the guy shows up to rap, while Doug E. Fresh beat-boxes, at Gabrielle Union’s 40th birthday party, well, it doesn’t seem all that weird? I don’t know. I really don’t know. Anyway, take it away, Will.

Filed Under: Will Smith

See all Will Smith

The Walking Dead Season 3, Episode 3: 'Walk With Me'