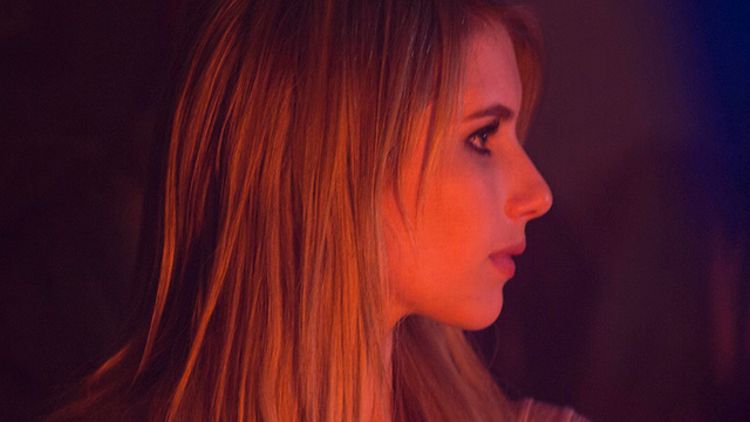 SPOILER ALERT: Plot details from the season premiere of American Horror Story: Coven; proceed at your own risk.

American Horror Story is a show where terrible, horrible things happen constantly — online commenters in the past have suggested it be retitled American Horror Story: Trigger Warning. Granted, these terrible, horrible things usually provoke some kind of revenge, and watching justice be served for crimes that usually go unpunished in real life is a particular kind of wish fulfillment that the show offers. On this week’s premiere of American Horror Story: Coven, viewers witnessed a particularly heinous act in a scene in which Madison Montgomery, a party girl played by Emma Roberts, was gang raped by a group of fraternity brothers. The rape was avenged by the episode’s end, although obviously that didn’t really undo any damage. Because within minutes of the scene, the trolls had taken to Twitter with innumerable hateful tweets, making sure to include a mention of @RobertsEmma while cheering on her character’s rape.

Emma Roberts is an actress whose reputation as a bit of a party girl herself often precedes her. With Eric Roberts as a father and Julia Roberts as an aunt, she has been accused of benefiting from nepotism without having the talent to back it up. But she’s actually a more than decent actress, who excels at playing mean alpha girls who terrorize their inferiors. She was great in Scream 4, and who knows, maybe horror is her genre? Having rape be the event that galvanizes her character into revenge is a horror cliche, but Madison Montgomery is a role that’s been tailored to fit her perfectly, and AHS is a show with a huge ensemble of unconventional female characters. Roberts was the subject of controversy earlier this year when she was arrested after a brawl with her boyfriend and AHS costar Evan Peters in Montreal. Many of the AHS hate tweets seemingly came from fans of Peters, whose AHS: Murder House character Tate attracted legions of Tumblr fangirls enamored of him despite his role as a vicious, murderous sociopath.

Although AHS is rated TV-MA, it’s still incredibly violent for cable, even in a post–Breaking Bad universe. American history is built on genocide and tragedy, and AHS, like Breaking Bad, wants to dig around in the mud under Plymouth Rock and turn up all the wiggly unseemly bugs. This season of AHS, set in New Orleans across several time periods, partially focuses on slavery, but on AHS, no subject is ever handled with kid gloves when it could be poked at with Freddy Krueger claws instead. It’s a divisive approach. The show is visceral and provocative, but could easily be called out for exploiting the very topics it’s supposedly demonizing. This is not unique to AHS — it’s an issue that runs across Ryan Murphy’s television empire, from Glee to Nip/Tuck. But whether or not you enjoy AHS, you have to admire its nerve.

The rape scene was depicted as a violent act of pure aggression. It was not sexualized or soft-pedaled, which made it immediate and repulsive to watch. AHS has an uncanny ability to provoke pure disgust. How many other shows can boast that they make viewers need to throw up? The show has no use for good taste. It’s about digging into the human psyche to expose its ghosts. So the trolls who were gloating that the rape scene not only didn’t make them sick, it made them happy, were probably just trolling to provoke. Most likely they were just proving that old saw that you can say anything on the Internet and get away with it, out of boredom. The rape was only one of a number of extremely controversial plot elements from the premiere, and knowing AHS, the upcoming weeks will serve up plenty more gristle for the Twitter mill. The trolls won’t go away, but you don’t have to pay attention to them, either. Just rest easy knowing that Queen Jessica Lange will soon suck out their souls.