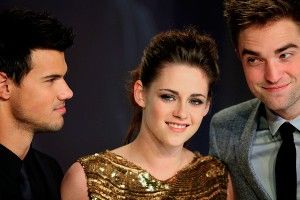 This holiday weekend in sunny Los Angeles, no one fought over the cranberry sauce, no one overcooked the turkey, nobody’s uncle got drunk and groped everybody, and [insert other cliches suggesting a soothingly peaceful Thanksgiving]. That’s because Hollywood just had its best! Thanksgiving weekend box office haul! Ever! With the latest and last Twilight leading the way, this weekend’s movies topped out at $290 million on Wednesday through Sunday, crushing the previous best for the same stretch, 2009’s $270.5 million. Congratulations, Hollywood!

Breaking Dawn — Part 2, now in its second week, was still the big dog, taking the no. 1 spot with $64 million (that’s good for $227 million here and $577.7 million internationally). Skyfall, another big non-newbie, stayed up at no. 2 with $51 million, which makes it the first Bond movie to crack $200 million in the U.S. But the good vibes spread everywhere, not just for the big guys. Red Dawn pulled in $22 million, and that movie has inauspiciously sat on MGM’s shelf since 2009. Life of Pi, despite its highbrow associations, managed $30.2 million, and another awards favorite, Lincoln, did near blockbuster numbers, too, landing $34.1 million over the break. Not bad for a movie that appears, at least to the untrained eye, to consist entirely of two and a half hours of Daniel Day-Lewis grimly wagging a finger in your face.

But even among all this holiday cheer, there must come some darkness. And that darkness is animated Christmas movie Rise of the Guardians, which recasts Santa Claus and the Easter Bunny as world-protecting superheroes. Despite a $145 million price tag, Guardians managed a relatively paltry $32.6 million, which might have the folks at DreamWorks feeling a bit on edge. Hoping for an unlikely turnaround, DreamWorks would do well to move beyond Thanksgiving and toward the lessons of another holiday, one colloquially known as the Festival of Lights. Don’t ever give up, Rise of the Guardians — the Maccabees certainly never did.

See all Life of Pi