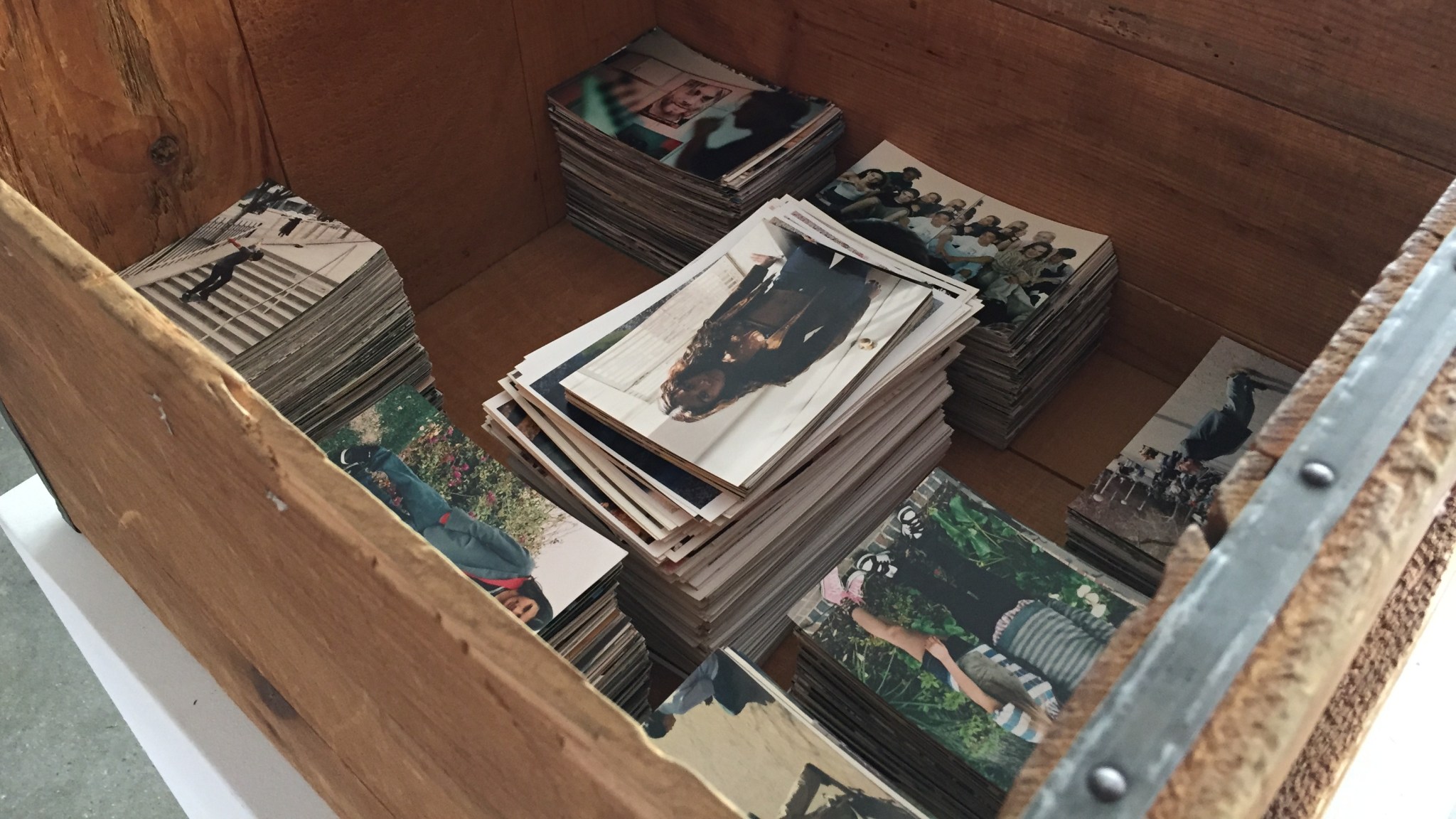 “There’s no rhyme or reason to the box.”

That’s the first thing actor Leo Fitzpatrick told nearly everyone as he led them through the Larry Clark $100 Photo Sale. The process was simple. Inside said wooden box were nine tall stacks of 4-by-6 and 5-by-7 photos shot by Clark — the notorious director,1 photographer, and artist. You grabbed a chunk from a stack, found some space among your fellow art scourers on one of the shelves that ran along the space’s bare white walls, flipped through the images, maybe set aside one or two you’d consider getting later, handed the rest back to Fitzpatrick, returned to the box for another round, repeat. If you did decide to buy something, each image, no matter the subject or when it was from, cost $100, plus $9 for California sales tax.

On Thursday morning at Ooga Booga in Los Angeles’s Chinatown, there were already eight customers at 10:30 a.m. looking through Clark’s photos. It was the first day of the sale, which will last through next Wednesday. Things were supposed to get going at noon, but they quietly opened the doors early to avoid overcrowding. When they held this same sale in Paris last July, there were long lines to get in all week and they’d sometimes have to kick people out after just 10 minutes of perusing. “France was such a shit show,” said Fitzpatrick.

Clad in a black jumpsuit with a camouflage pattern, Fitzpatrick kept things running in a friendly but firm manner. With a scraggly beard and his hair graying under a yellowing Supreme baseball cap, he put the discards back in the box, answered questions, stamped Clark’s signature on the back of purchased photos, told lingerers when it was time to wrap things up, and dipped outside for a cigarette when he could. “Sometimes it can feel like a sample sale at the Gap and you’re folding T-shirts all day,” he said.

And Fitzpatrick was right about the box: Clark’s photos were a jumble. They were taken between 1992 and 2010, and there was no attempt at organization, classification, or chronology. Here’s a sampling from one pile of about 130 images:

There are upscale galleries that represent the 72-year-old Clark, carrying images that date back to the early 1960s, when he was documenting the drug addicts in Oklahoma with whom he got high. Those places usually sell his work for thousands of dollars. But as his second wave of recognition grew through films like Kids and Bully, Clark still got his pictures processed at drug stores and 12-hour developing spots.

When Clark had major surgery at the end of 2013, he began to think about his death and how his children wouldn’t know what to do with the unruly collection of stuff that fills the New York City loft he’s had for 35 years. He began to spread his photos all over his floor. When Fitzpatrick came for a visit, he asked him what was going on. The two became friends 20 years ago, after Clark cast the unknown and underage Fitzpatrick as Telly, the star of Kids. Fitzpatrick has continued acting since then, but he’s also become a fixture in the city’s comingling art, fashion, and music community. Since so many of Clark’s fans are young and can’t afford to buy his work when it’s formally shown, the pair came up with the $100 sale idea. As Clark put it over the phone from New York,2 “People get to rummage through the prints and leave their fingerprints on them.”

That first sale was held in New York last year at Home Alone 2, the tiny Lower East Side gallery that Fitzpatrick runs. It was done only by word of mouth, but once people outside of the city heard about it, they brought it to London, Paris, and now Los Angeles. There’s usually about 5,000 prints in the box at a time. If 200 photos are sold, 200 new ones are added. “They’re all one-of-a-kind, except for a few doubles from when the Chinese guy on the corner accidentally printed two copies,” said Clark.

The selection is totally random. Fitzpatrick promised that there’s no secret stash being held for friends or art collectors, and Clark did very little editing of what images were included. “They’re all out there except for a naked photo of me an ex-girlfriend took while I was sleeping and some very explicit stuff,” he said.

At a little past 11:30 inside the space, things were starting to get crowded, so Fitzpatrick began a line to get in. Sales were brisk, with most people buying one or two prints (often nudes), but some customers broke into the double digits. Someone showed Fitzpatrick a photo shot in Washington Square Park, the East Village landmark prominently featured in Kids as a place where skaters congregate to hang out, smoke weed, and beat people down. With so many memories floating in the air, Fitzpatrick turned wistful and bitter. “A lot of my friends out here are nostalgic for New York. I tell them that whatever you’re nostalgic for is gone,” he said. “I was walking through the park and five cop cars pulled in. It was for a guy playing the bucket drums.”

A woman with sporty Nikes who looked to be in her forties asked Fitzpatrick if there were any photos of just Sevigny. “Chloë went like that,” he answered.

“But we made sure we got here early,” she replied.

The line to get in was getting longer and so was the one to pay. With no available shelf space, some people were laying out their picks on the concrete floor as they fussed over their final selections. Both a Japanese couple and a French couple were hoarding piles of photos.

Fitzpatrick took a smoke break and then came back inside. “Hey, Leo,” photographer Ben Colen called out from across the room and held up a picture of four teenagers at the famous Brooklyn Banks skate spot.

“That’s not me,” said Fitzpatrick of a bleached blond with a passing resemblance to him.

He said the shot was from 1993 and he remembered the day well. It had been only his second time at the Banks and there was a major gathering of skaters. All kinds of craziness happened and there was nearly a riot. “I definitely wanted a photo of that era,” said Colen, “but I didn’t expect to see one of me.”

The lady looking for the Sevignys and the guy she was with had made their choices. As Fitzpatrick restocked the box, she passed him the ones they’re weren’t keeping. “Here’s an edited pile of real winners, if you think someone might want them,” she told him.

Filed Under: We Went there, Movies, Larry Clark, Kids