We Found It on Netflix Instant: Screwballs 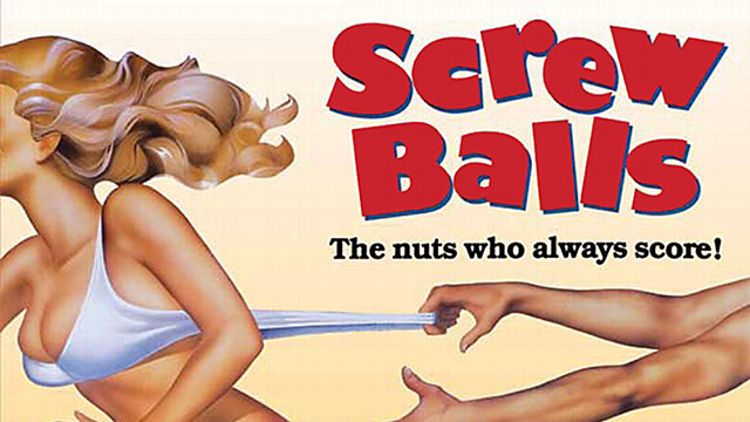 So while Tim remains mildly innocent, that jerk Purity Busch sends the rest of the gang to detention for attempted or successful sexual assault. What a bitch! Rick sneaks into the nurse’s office and poses as a doctor giving free breast exams, which as we and these girls all know involves lots of squeezing boobs and putting the stethoscope right on the nipple. I suppose these girls can be forgiven, as the movie’s set in the ’60s, for not knowing the right way to do a breast exam, but they should have been suspicious when Rick licked his lips and said “oh yeah” in the roomful of high school girls in their bras. Purity sends him to detention.

Kent steps to the front of his French class when the teacher steps out of the room, and begins to give a lesson on how to properly give “French head” by holding a cardboard Eiffel Tower replica at his waist and forcefully shoving it into Purity’s mouth while he yells at her to use his tongue. Strangely, she also has him sent to detention. It’s called a joke, Purity. Maybe if you weren’t so stuck up you would think it’s funny when an ascot-wearing rapist with a tennis jacket jams a model between your teeth.

Howie Bates, the nerd, uses his nerd knowledge to tweak the school’s various fish-eye mirrors in a way that lets him look up skirts, which is illegal. Purity sends him to detention, too. At this point, I think we’re supposed to really hate Purity, because she keeps getting in the way of these guys nearly raping women. Luckily, detention allows the horny five to come up with a new plan: nearly rape Purity Busch by the end of homecoming. Fun! Nobody’s ever seen her (presumably) sweet, sweet boobs, and they vow to be the first. They have lots of schemes to accomplish this.

Tim: 62/69 Boners
Tim’s refreshingly innocent in this whole affair, and his scheme to “get” Purity Busch is the most heartwarming: He shows up at her house with a bottle of champagne and asks for permission. Now, there’s a misunderstanding, and he has sex with her mom instead, but it’s all in good fun. He’s also charming and nervous when Bootsie asks him on a date, and she makes all the first moves. Then he derails their sex in his van when he sees Brent is trying to get fresh with his sister at the drive-in (where they are showing a lesbian prison movie). This guy’s got a heart of gold.

Brent: 64/69 Boners
Brent is rich, presumably, because he also wears an ascot, a blazer, and a tennis racquet. And as much as he talks a big game, he seems overwhelmed when actually faced with sex. The biology teacher overhears him lying about how often he’s slept with her, so she tries to seduce him in the lab supply closet. He accidentally starts a chemical fire. Get it together, you dork. His plan to nab Purity involves spiking her punch with Spanish Fly, but he awkwardly spikes the whole bowl, leading to a T&A (Taft & Adams is the school name, naturally) orgy. He can’t even get Purity to try one glass of the stuff until he’s conked in the head by something offscreen and passes out. What a zero.

Purity’s Mom: 69/69 Boners
She’s got major boners. When Tim accidentally sneaks into her room, she mistakes him for her husband and goes to town. When the lights are turned on and it’s revealed she’s actually screwing a minor, she doesn’t seem that concerned, because sex is sex. Even when her husband fires at Tim with a shotgun, she stills wants it.

Purity’s Teddy Bear: 69/69 Boners
In her sleep, Purity talks out loud and then grabs her teddy bear, named Teddy, and has sex with it. Teddy loves it.

Principal Stuckoff: 67/69 Boners
Like all mean school administrators with Hitler mustaches, Stuckoff is secretly a sex pervert. The five guys catch him at the strip club when he runs onstage and gropes the stripper.

Howie Bates: 68/69 Boners
Howie tries to use his brain to get Purity, building a hypnotism machine. It does not work, and instead he gets beat up by all the girls on the cheerleading squad. Later, during strip-bowling, he’s naked, and a bowling bowl lands straight on his crotch. It sticks, and it won’t come off. (Presumably, his thing went in one of the holes.) Strangely, the guys offer to help first, and they are very forward about trying to help their naked friend remove the last piece of bowling ball clothing he’s wearing. But when that doesn’t work, the girls all give him kisses and he orgasms the bowling ball across the alley and down the line. “My first strike!” he says.

Purity Busch: 63/69 Boners
Purity sure seems like she’s not into boners and stuff, but she does have sex with her teddy bear in a dream. And I don’t think the teddy bear initiated it.

Rick: 69/69 Boners
Rick’s the real deal. This guy wants to get some, and he will literally break all the laws to do it. He employs costuming multiple times. As mentioned above, he poses as a doctor to do breast exams, and then he later pretends to be a sewing teacher to measure cup size. That is a very large gamble that paid off. It doesn’t seem logical to me that the girls at this school would be willing to strip to their bras the second an authority figure suggests it, but that does seem to be the vibe. Also, for the breast exam scene, they took off their skirts, too. They definitely don’t have any boobs down there. Or maybe they do? I read somewhere that the director imagined this film as a live-action cartoon, though the kind of cartoon with tons of boobs and attempted sexual assault. So I guess it’s possible that the director imagined that these girls also have boobs other places besides their chests. It’s sort of like how I kind of suspect that Tilda Swinton can spontaneously spawn a vagina anywhere on her body at will. It just opens like an eyelid, like that monster’s hands in Pan’s Labyrinth. But she can’t have more than four open at a time or she gets sick. If I made this up, why’d I make so many rules? I don’t know. Later, at the drive-in, Rick makes out with three girls at once, possibly inventing the triple-kiss.

Eventually, the boys settle on one final scheme. “There’s still one thing we haven’t tried: magnetism.” That is the one thing they haven’t tried. So the guys rig up Purity’s homecoming Statue of Liberty costume with magnets, and during the climax of the song, they kick off the “magnet.” Tubas and basketball hoops fly everywhere around the gym, and Purity’s dress rips off, revealing her breasts. They are totally OK breasts. Oddly, she does not cover them, and the movie immediately cuts to the credits, which play over her just standing there showing off her breasts from multiple angles. Success! Five perverts have publicly sexually humiliated a woman. Very horny!

When to Watch It: When I was a kid, we’d raid my friend Mike’s mom’s closet for these EP videocassettes that Mike’s uncle sent. He had Cinemax, and he’d just tape movies back to back to back onto eight-hour tapes and then send them to Mike’s mom and dad, as presumably they’d appreciate the free movies. They didn’t, as most involved ninjas and bikinis, but they were right in our wheelhouse. We’d put them in in the basement VCR and watch all eight hours in about 30 minutes, fast-forwarding to the “good” “parts.” That is probably how this movie is, and has always meant to be, seen: in 16x time by horny middle schoolers, in about a 10th of the time. God bless Canada.