We Found It on Netflix Instant: Van Wilder: Freshman Year 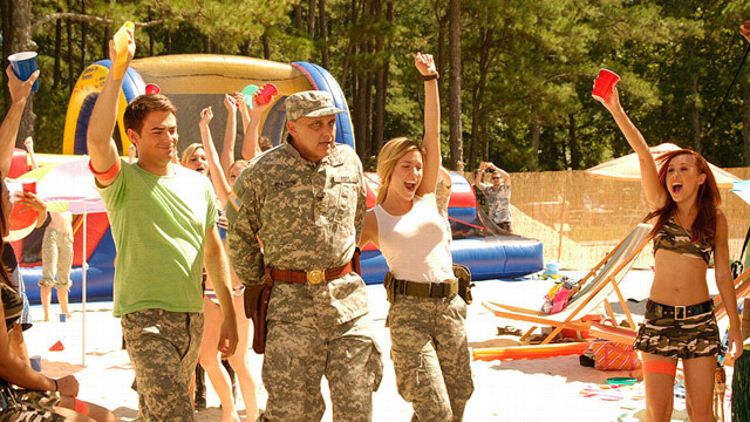 What It’s About: A rich dick convinces a college full of squares to loosen up by tricking them into drinking and having sex.

Who It’s For: Rich dicks.

I never saw Van Wilder or Van Wilder 2: The Rise of Taj, so it is perhaps unfair, or even immoral, for me to be reviewing the third installment in the series, called Van Wilder: Freshman Year. I meant to see the first two, but one night I caught a few minutes of the original on cable, and I was horrified to hear other characters calling Ryan Reynolds’s character “Van.” Van? His name is Van? Then, and now, I can’t get over that Van Wilder is not his last name but his full name. I had just assumed that his first name was Josh or Cody or something, and that Van Wilder was what everyone called him, because it is cool when guys call each other by their last names, like they are in the military or something. “Van Wilder” sounded like an appropriately grandiose last name for an epically big man on campus. “My name is Baron Charles Van Wilder and I am the Duke of Partying!” Is Van Wilder a baron or a duke? What’s the difference? Is the right to call oneself that related to land ownership, or is the title passed down by blood? These are all questions I hoped to get answered in this Ryan Reynolds–less prequel, Van Wilder: Freshman Year.

From reading the Wikipedia, I learned that Van Wilder has been at college a long time and loves to party, but not to graduate. Presumably, at the end of the first movie, he grows up and changes, or decides to fight change and accept who he is, or some other hollow third-act turn that attempts to transform a screenplay about removing bras into an emotional journey worth taking. Because Ryan Reynolds makes a lot of money for movies now, and it’s also not interesting to make a movie about a guy who has left his party college, and because Taj has already risen, the third movie in the trilogy takes us back to the beginning, to Van’s (ugh) first year at Coolidge College.

It’s not an origin movie, per se. We do not see him learn how to party. At the start of the film, Van already loves to party, despite only being 18. The first scene shows him getting a blow job while giving the commencement speech at his high school graduation and then going to Amsterdam alone to drink and sleep with prostitutes. Then he goes to college, and he gets in lots of fights with Dean Reardon and the ROTC in his quest to turn this now-conservative and religious campus into one appropriately obsessed with body shots. He also falls in love with Kaitlin Hayes, who is played by Kristin Cavallari, which tells you a lot of what you need to know about this movie.

Jonathan Bennett, an actor with thick eyebrows who enjoys makeup on his face but not on his neck, plays Van. Bennett was probably cast for his ability to mimic the comedy stylings of Ryan Reynolds, which consists of saying all lines of dialogue the way Ace Ventura says “alrighty, then.” Or maybe Bennett was cast because he’s something of a pro at sequels you’ve never heard of; according to his IMDb page, he was in both Cheaper by the Dozen 2 and a Dukes of Hazzard prequel called The Dukes of Hazzard: The Beginning.

I knew going in that Van Wilder was a crazy party animal, but for some reason I was expecting more PCU and less Porky’s. I was wrong. Everything in this movie is about sex, and every woman is endlessly objectified, often in racist ways. It’s breathtaking to watch the filmmakers’ commitment to this. I’m sure if I had a Blu-ray copy of this I could freeze-frame any random scene in the movie and zoom in to find an out-of-focus female extra fellating a banana, just because. So all-encompassing is the sex that I think it makes sense to tell the story of Van Wilder: Freshman Year by explaining all the entries under “Sex & Nudity” on the Parental Guide of its IMDb page. These are chronological, conveniently, and the IMDb users who compiled this list for no money or reason are American heroes. Here goes.

The movie ends with war games, and Van and his dad’s team defeats Reardon’s ROTC students with partying. Literally, every soldier is distracted by breasts or beer and gives up. This is a profound message about making parties, not war, or something. Has the Taliban ever crushed a beer bong? I bet they’d chill out.

When You Should Watch It: When the gigantic dog testicles in your life have gotten “too real” and you need to kick back and relax with some CGI dog testicles on which some animation school graduate probably spent 800 hours working.

Trailers of the Week: Twilight, Wreck-It Ralph, Smashed, and More