We Found It on Netflix Instant: A Warrior’s Heart 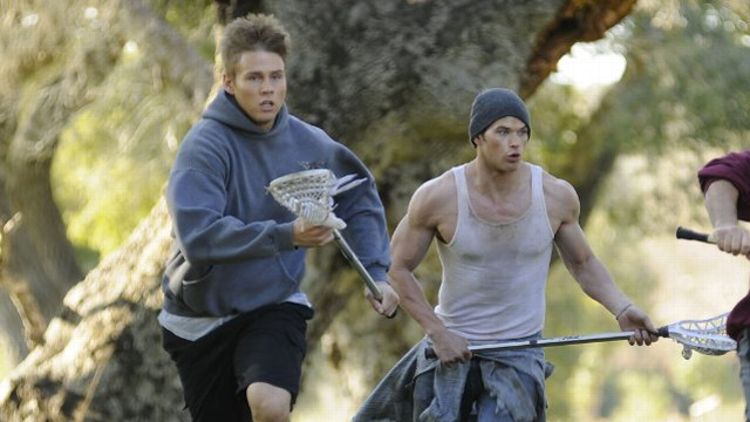 What It’s About: A lax bro (Kellan Lutz) must stay out of both the literal and figurative crease in order to attack the net of his own heart.

Who It’s For: People who are curious what Kellan Lutz looks like with his shirt off at different times of day, paired with different types of pants.

I shouldn’t be reviewing this movie, not for this column. This column is meant for weird straight-to-video garbage and films produced exclusively for the purpose of dodging taxes in Germany, and in a just world A Warrior’s Heart would have made $400 million. The Oscars would have already been renamed The Warrior’s Hearts. “And the Lutzie goes to … Kellan Lutz!” Alas, these things didn’t come to pass. I tried to see A Warrior’s Heart when it came out and it played in one Manhattan movie theater for about three days. I don’t know what went wrong. On paper, it seems perfect. Twilight beefcake Kellan Lutz stars as a troubled high school lacrosse star trying to get his life back on track after a family tragedy. He’s so sick at lacrosse it’s crazy. The movie deals with universal themes with which we can all empathize: themes like switching from a West Coast to East Coast style of lacrosse play, losing your position as right-side attack, one arm’s shot play being weaker than the other, etc. I could go on. These are universal themes.

The problem may have been biases by so-called critics. As one five-star review on Netflix succinctly explains: “Well I have learned one thing from reviews.. Lots people said they did not like this movie.. ahhh thats is from the farthest form the truth.” I couldn’t have put it better myself.  Do critics not realize that lacrosse — or “lax,” as everyone who is chill calls it — is one of the chillest activities on the planet, one criminally underrepresented on film? Sometimes I feel like no major American film critics are lax bros, that none of them spent afternoons packing a lip and breaking in lacrosse stick pockets at their East Coast boarding school.

I went to an East Coast boarding school, and though I did not play lacrosse, I think the culture surrounding it is fascinating and hilarious. While I weep along with the rest of the world at football heartbreak in Friday Night Lights, the same drama applied to lacrosse is very funny to me. That is unfair, and if you are reading this while wearing a T-shirt that says “Now Entering Laxachusetts,” I apologize. But if you are wearing that T-shirt, you are also probably white and upper middle class, so I bet you’ll do fine in life with or without my apology.

Lacrosse is an activity about which large swaths of the population know nothing, but that alone is not enough to stop it from being a great movie. In fact, it could help. I had never heard of drumlines before Drumline, and I’ve now seen Drumline about a dozen times. But the drumming in that movie was awesome, or at least it looked it, and the lacrosse in A Warrior’s Heart looks like it’s being played entirely by actors who heard of the sport right after they booked the part. I don’t actually know what great lacrosse is supposed to look like, but it should not look like how I imagine I’d look trying to awkwardly scoop the ball up and keep it from falling out of the pocket. You, the reader, have no way of knowing how good I am at sports, but you have my word I am very bad at them. I am not coordinated. I’m less of a “throw me the rock” kind of guy and more of an “I spilled sauce on my pants” kind of guy.

The plot of A Warrior’s Heart is mercifully simple. Kellan Lutz plays Conor Sullivan, a high school lacrosse player on the West Coast. Conor’s dad moves the family back to the East Coast so Conor can join the team at dad’s alma mater, Brierfield, giving Conor a shot at recruitment by the Naval Academy. When Conor’s dad is killed in Iraq, Conor spins out of control, attacking players and also a trophy case and landing himself in jail. An old Marine buddy of his dad’s, Sergeant Wayne, takes Conor to a work program at his Indian reservation; there Conor learns the true meaning of himself, warriors, lacrosse, his dad, discipline, hard work, Indians, and a good night’s sleep. He rejoins his prep school lacrosse team and helps them win the first East-West High School Lacrosse National Championship. He kisses the coach’s daughter. He gets to go play lacrosse at Navy and hold an American flag in the air.

Though the story may be straightforward, it overflows with nuance. Here are some of my favorite parts:

When You Should Watch It: At 5 a.m. every morning before lacrosse practice. It’s your only option if you want to watch a boring movie about prep school lacrosse and its connections to its Native American roots, except Crooked Arrows, which is the same thing and came out this year. Kellan Lutz or Brandon Routh? Don’t make me choose!

Trailers of the Week: The Master, The To Do List, Seven Psychopaths, and More