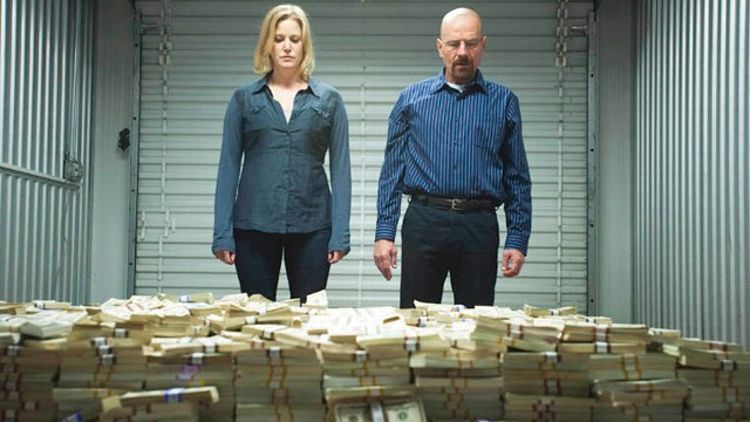 Walt Whitman is a very strange choice for a Deus Ex Machina because, let’s be honest, he’s about as far from a machina as you could possibly get. Soaring, sloppy, and sentimental, Whitman gained notoriety and acclaim for his humanist poetry, passionately idiosyncratic verse that broke free of the rigid demands of meter, rhyme, and, occasionally, reason. Leaves of Grass did not have a tidy conclusion. The book was published and republished, in increasingly swollen volumes, over a span of 40-plus years. It was a life’s work in the most literal sense; it ended only when Whitman died.

Breaking Bad, of course, is nothing if not tightly choreographed. Every gram, every crystal is weighed, bagged, and weighed again. There are as many loose threads as there are loose lips left in the Fring organization. Fifty-four episodes in, there’s not a plot point or pointy shiv out of place. So what are we to make of this most structured and clinical of shows going all wobbly for the randy beardo who wrote gushingly about “echoes, ripples, buzz’d whispers, love-root, silk-thread, crotch and vine”? In his softer moments, after a beer, say, or when he’s not orchestrating the mass murder of a dozen prison inmates, Walter White is exactly the sort of high-minded ponce who’d wax lyrical about the inherent poetry in the chemistry of common life. But there’s the rhapsodic beauty of methylamine in solution, and then there’s “Not Heaving from My Ribb’d Breast Only.” The elegance of the former comes from repetition and control; the latter seems to teeter even as you read it.

Yes, Walter White’s been singing a homicidal song of himself for five seasons, but it’s very much a solo act, especially now that yet another former colleague has wound up on the wrong side of the acid bottle. The incriminating volume that lit the light bulb over Hank’s head — the first one switched on in the White household all season — and gave this episode its literary title (“Gliding Over All”) was a gift from Gale Boetticher. Two years ago, Gale’s love of wifty things like poetry — not to mention vegan cookery and karaoke — was presented as the difference between him and Walter; Gale was chaotic jazz to Mr. White’s dependable classical. Heisenberg would never care about something as unlucrative as coffee. But last night injected some of Gale’s jazzy instability into the proceedings, and the results were as confusing as they were potentially devastating.

More than any of the other seven hours in this shortened half-season, this sort-of finale felt rushed, occasionally fatally so. “Gliding Over All” functioned both as a canny title (from the poem: “Death, many deaths I’ll sing”) and also a serviceable description of what director Michelle MacLaren had to do with too many of the details. “Madrigal” — in retrospect, probably the strongest episode of these eight — established MacLaren as the best of Breaking Bad’s deep bench of cinematic stylists, and her work last night was remarkable, even when it frustrated. Her sweeping montages were pure visual poetry, communicating the grinding success of Walt, Todd and Lydia’s Czech expansion (those tents appearing over the McMansions like gaudy little grace notes!) and the gruesome violence that made it possible (the two-minute prison massacre may have been the most horrific thing in the long, horrible history of Breaking Bad; it made Oz look like Oz). But after so much grueling prologue, it seemed odd that Walter White’s long-sought-for reign as Scarface would last only as long as a Tommy James & the Shondells song.

Was it a Whitmanesque comment on the messiness of life and the folly of best-laid plans? Or maybe it was a winking apology from Vince Gilligan that there was no way to steer this ship into port without gunning the outboard motor a little bit? Despite some moments of breathtaking narrative gumption, this half-season, taken as a whole, suggests that Gilligan, like Kaylee’s late, lamented Pop-Pop, might just be a victim of his own credo. The show’s DNA from the start was always full measures. It’s simply not in Breaking Bad’s nature to wallow or preen, to stay past its welcome. And if that meant eight increasingly claustrophobic hours that isolated the main character to the point of myopia, well, so be it. When things were going to heil in a handbasket in Germany in Episode 2, I mused about the possibilities of Breaking Bad going widescreen, of the sudden lack of organizational structure allowing Walt and Jesse to soar beyond the sun-bleached deserts of New Mexico. But on Gilligan’s storytelling island, success isn’t a rush, it’s a hangnail. The only things flying around were bugs. (Per Whitman: “Illustrious the motion in all beings, even the tiniest insect.”)

This is the charitable way to consider the warp-speed in which we went from Mike’s dispiriting dissolution to Walt’s short-lived retirement party three months later. It’s certainly in keeping with Breaking Bad’s grim POV that there really was nothing to Walt’s empire-building other than some brute violence and some exhausting hard labor; a groovy soundtrack with a timeout for some sandwiches. Perhaps the point Gilligan was trying to make to us was the same one Skyler attempted in the storage facility: This could go on forever; how much is enough? (Whitman: “What is your money-making now? What can it do now?”) Maybe there was no need for an elaborate endgame because, from the moment Walt set foot in the RV — so touchingly eulogized last night between two bald men likely to kill each other — this entire show has been nothing but endgame.

Of course, there’s another way to consider this. One that suggests that, despite most of the cuts coming out of the lighting budget, the tunnel-vision of these episodes still has as much to do with AMC’s money issues as Walt’s, that Gilligan’s slavish devotion to slick continuity meant that there are fewer and fewer interesting supporting players to draw on (R.I.P., Dennis the laundry manager! And, if not in peace, at least rest not in flames!) as we approach the conclusion, leaving the show cramped and diminished. It’s been much remarked-upon how much Chekhov would have appreciated the haunting presence of the ricin capsule (could it really have tasted any worse than Lydia’s precious Stevia?), but even he would have raised his bushy, Russian eyebrows at Todd’s conveniently bloodthirsty relations, the ease with which Vamonos Pest suddenly went international.

And with apologies to Mr. Ehrmantraut, there was no bigger casualty this season than Jesse Pinkman. The isolation of Heisenberg may have been necessary for the long, downward arc of Gilligan’s antihero, but it cost the science-minded show its most highly charged electron. (Perhaps the notoriously bad student was paying attention in English class after all. Said Whitman: “Let the tools remain in the workshop! let the money remain unearn’d! Let the school stand! mind not the cry of the teacher!”) Few actors are able to communicate as much with a wide-eyed stare as Aaron Paul, but for as taut as his post-sobriety living room reunion with Mr. White may have been, it would have been nicer to see him given a reason to hunt his former partner, not hide from him. It’s inevitable that when the show returns next summer, Jesse will once again be given a reason to love or loathe Walt — as far as we know, that Lily of the Valley is still lurking in a trunk somewhere — but it seemed like a missed opportunity to leave the most combustible of Breaking Bad’s relationships off the flame.

Still, it’s worth remembering that with the second half of this season still to come, last night wasn’t a traditional stop; it was merely a pause. Such a strange rupture in what would otherwise be a breathless race to the finish line (or to the bottom; whichever comes first) should encourage some patience, even if Breaking Bad fans — like meth fans — rarely are able to exhibit any. (Whitman: “If its poets appear it will in due time advance to meet them, there is no fear of mistake.”) No matter how hurried it seemed, Gilligan and his writers have done real work with Walter White this year, pushing his megalomania to the breaking point and then not having it break. As colleagues and bodies fall around him like pieces of a ruptured airliner, Walter has climbed ever higher. And what he found there may have been the darkest joke of all: nothing. No satisfaction, no validation, no purpose. He’s merely alone at the top, with no one to talk to, no one to share anything with, trapped in a gleaming MRI machine of his own making. He’s still staring at the same pool, still pestered by the same flies. (Good thing the poet enthralling Breaking Bad isn’t Emily Dickinson!) His attempts at connection come across either as cries for help (“Remember when we ran out of gas?” he asks Jesse, wistfully) or monstrous self-revelations (“I used to love to go camping” is his weak response to Hank’s death-weary face. Walter, your human mask is slipping!). Maybe we never got to revel in Scarface’s success because he never really had any.

At the close, Walter tells us that he’s actually out — though I’ve no idea why anyone, not Lydia, not Declan, not even Todd’s uncle, would let him do such a money-losing thing. And as Walter Jr. pushes Holly around the backyard in a plastic car that’s still somehow cooler than the PT Cruiser Skyler once bought him, it was hard not to tense up and think some wild, story-exploding plot device was about to fall from the heavens yet again. Maybe this time it would land on the children. But in a neat twist, Walter, surrounded by loved ones, got what he wanted, and we got a hint of what’s coming to him. Family was the reason all of this began and family will be its undoing. It turns out Skyler was very, very wrong: the inciting incident wasn’t a knock on door no. 1, it was merely Hank’s workmanlike no. 2.

How perfect: Walter White, the scientist, undone by poetry. With long months looming before next summer, perhaps it’s best to look to the other W.W., for words to sustain us:

No one knows what will happen next,
Such portents fill the days and nights;
Years prophetical! The space ahead as I
walk, as I vainly try to pierce it, is
full of phantoms, Unborn deeds, things
soon to be, project their shapes around
me, This incredible rush and heat, this
strange ecstatic fever of dreams …

The unperform’d, more gigantic than ever,
advance, advance upon me.

We Found It on Netflix Instant: A Warrior's Heart