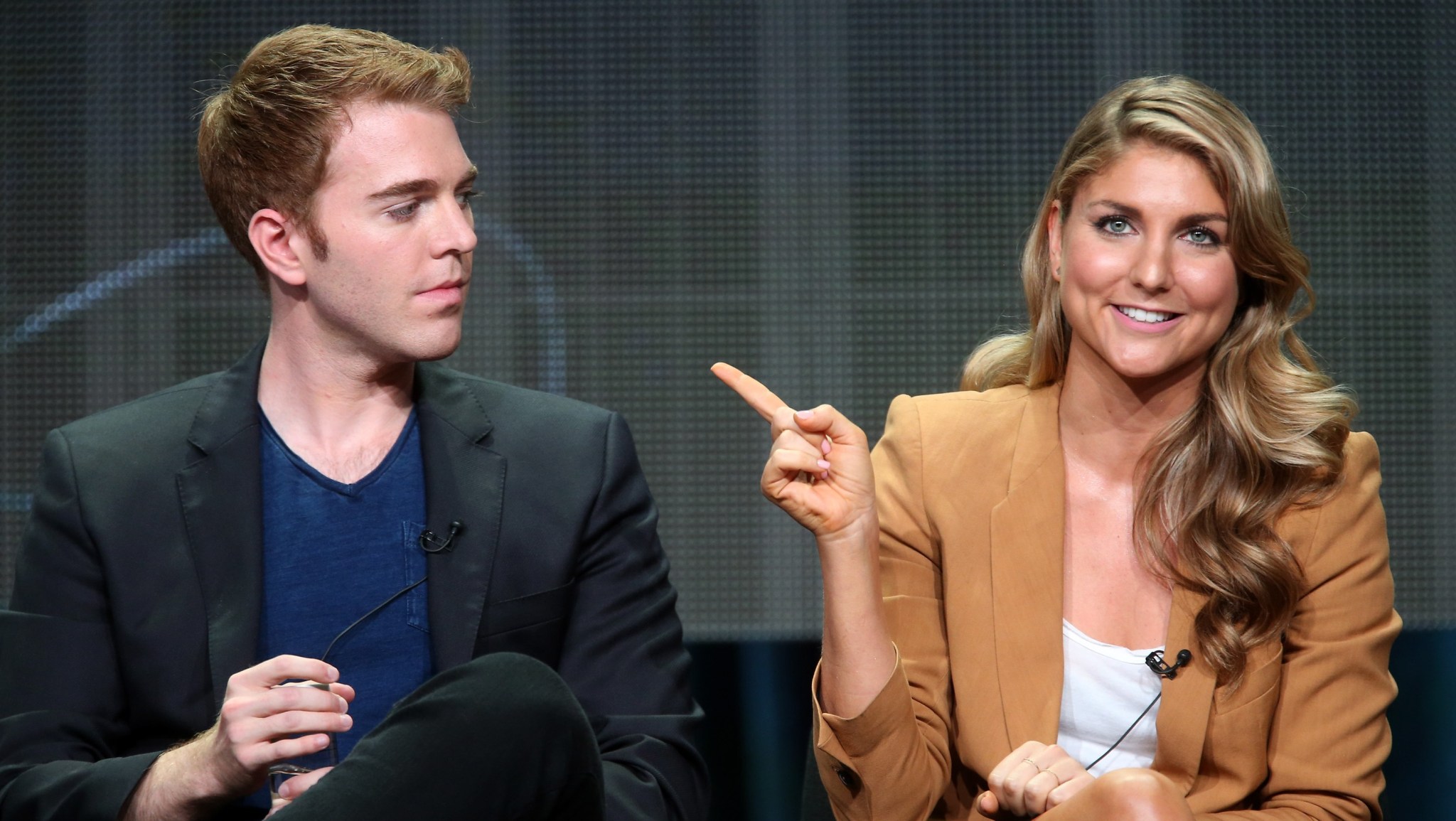 Chances are, you haven’t seen The Chair. Chances are, you haven’t even heard of it. The Starz show — a reality competition in which two first-time directors are challenged to make a movie from the same script, with $250,000 going to the winner — wrapped up its first season this weekend, to a, um, compact audience (the episode before the finale aired to just 33,000 live viewers). And that’s too bad. The Chair wasn’t perfect, but it never intended to be. As a self-billed “experiment,” it was as ambitious as any show on TV. And through the prevailing drama, it did what it sought out to do.

Meaning: By the end, two movies did, in fact, emerge from the rubble. One was Not Cool, from 26-year-old YouTube star Shane Dawson, a teen comedy with its raunch amps turned up to a sad, nonsensical 11. The other was Hollidaysburg, from 32-year-old NYU film school grad Anna Martemucci, a grounded comedy with a surprising, sweet charm. Both operated, ostensibly, off a screenplay from the heretofore unproduced screenwriter Dan Schoffer.

Originally titled How Soon Is Now, the script was about college kids coming home for their first Thanksgiving break; presumably, it was chosen exactly for the blankness of its concept. Surely, The Chair knew that what did happen would happen: As soon as the script touched the directors’ hands, both went about stripping down and completely retooling the source material. It’s amusing to see the few bits that remain in both movies: a minor car accident as an initiating incident, a touch of romantically climactic physical comedy. At the bare minimum, it’s Dawson and Martemucci — who both shot in Pittsburgh, but didn’t meet until both their movies were done — returning each other’s winks.

The Chair is the brainchild of the movie producer Chris Moore (Good Will Hunting, American Pie), a legend forever in the Grantland halls for HBO’s Project Greenlight alone. Greenlight was a similarly minded “newbie filmmakers struggle and strive” reality show that Moore orchestrated in the early 2000s, alongside his pals Matt Damon and Ben Affleck. There are major differences: There was no competition element on Greenlight; also, The Chair is by far the slicker, more aesthetically pleasing show. But if you enjoy artsy people panicking, then both shows are for you. (BTW, Greenlight is returning, with Damon and Affleck but not Moore.)

When we interviewed Moore in September before The Chair’s premiere, he explained that the version of the show we would end up seeing wasn’t the version he originally conceived. “I’m sort of sad [the directors] were first-timers,” he said at the time. “The goal was to have experienced directors, but I couldn’t raise enough money to get somebody experienced.” So they pivoted, in a way that feels endemic to the kind of shows that both Greenlight and The Chair are: shows about people that are just, for the love of Christ, trying to get it done.

In the early episodes, Dawson repeatedly declares he’d been waiting to make a movie “all my life,” a truly preposterous thing for someone in his mid-twenties to say. But his drive wasn’t fake: Dawson saw this as his big chance to shed a certain YouTube stigma, and so he went for broke, in an almost insane way. Reviewing Dawson’s movie for the New York Times, Neil Genzlinger gave it a touch of instant infamy: Not Cool, Genzlinger wrote, “is an attempt at a raunchy comedy that is so poorly executed and so unfunny that no one involved with it should ever be allowed to work in the movies again.”

After reading that, you’d almost be going in to the movie with too high expectations of disgust. But boy, are they met! Within the first minute, we have an explicit and active glory hole and a young lady screeching “GIVE ME YOUR DICK!” and a homeless man eating his own shit, delightfully globbing handfuls into his mouth.

In the movie’s defense, I was moved to genuine laughs repeatedly by certain one-liners. At one point a character unconvincingly brags “I’ve eaten 17 pussies … no, 23 … I know it’s a prime number.” There’s a good running joke about the new drugs all the teens are trying: “I’m on Rihanna … it’s Molly mixed with adrenaline.” But it’s all drowned out by just a ridiculous amount of body fluid stuff and lowest common denominator hackery. Most insulting, honestly, are the paper-thin caricatures and the airdropped emotional beats. Dawson’s character, out of goddamn nowhere, reveals his mother’s death from cancer. A blind character all of a sudden proves wise beyond her disability. The love of an elderly couple is unironically praised as being “beautiful.” And all in between, we get pants-crapping.

In one of the more dramatic moments of The Chair, Zachary Quinto — a producer on the series and the movies, and the most famous person involved here — recoils in disgust after seeing Dawson’s movie, before ultimately pulling his name off the release. In response, Dawson sets up a camera in his car and films himself, like the YouTube native that he is, popping off. “Art house movies, great,” he says. “If that’s your cup of tea, well then, honey, sip it, because I’m over there drinking a big gulp of something sugary, sweet, and bad for me with the rest of America.”

This “art vs. commerce” (or, as The-Dream once nicely put it, Love vs. Money) dichotomy is exactly what Moore and the show was hoping to set up, and Dawson is only too happy to play ball. But here, Dawson’s black-and-white take feels completely tone-deaf. It’s like he cannot acknowledge that the best movies borrow a little bit of everything from everyone. Superbad, his declared and obvious inspiration, had jokes about menstrual blood, yes, but was also wonderfully tender in showing the angry pain of the misfits. Jonah Hill gets spat on by a ponytailed asshole who tells him he can’t come to his party. In Not Cool, it’s the nerd girl insinuating to an overweight girl, currently swaying with drink, that she looks “like a rhino that’s been shot with a tranquilizer gun.” And then the nerd gets projectile-vomited on.

That Dawson didn’t find the right balance of raunch isn’t surprising. As he explains at one point of The Chair, he’s been making YouTube shorts, nearly one a day, for eight years. Does that leave time to engage with footage beyond your own, and that of your YouTube friends and rivals? A certain old chestnut construction seems to apply here — Dawson’s Not Cool comes off like a raunchy teen comedy made by someone who has read about the form, but has never actually seen it executed in real life.

Martemucci certainly fits the mold for the “art” side of things. She operates as part of a collective known as Periods. Films, alongside her husband, Victor Quinaz, and brother-in-law Philip Quinaz. This neatly echoes something like the young Borderline Films guys, who made Martha Marcy May Marlene, as well as what is possibly a thousand other aspiring filmmaking collectives nationwide, all of them with quasi-to-actual-familial bonds and idiosyncratic work flow models and lots of bold ideas about communal creativity. The thing, of course, is that 99.99 percent of them won’t make a movie half as good as Martha Marcy May Marlene. Which didn’t really matter. With Martemucci and her crew, the optics were certainly there, as Moore surely was well aware.

What’s surprising about Hollidaysburg is that it’s not the staid drama suggested by its trailer and Martemucci’s tense demeanor. I was so pleasantly surprised by how much I enjoyed it: how relatable it was without needing to pander, how unafraid it was to go big with jokes or harsh with depression.

One character, the ex-popular chick now sleepwalking through her life, has a great, dry delivery: “I totally pushed a kid off the swings once to get an erection,” she tells her bewildered friend. Another character — what could have been a throwaway goofball older brother — manages to inject actual pathos into the weed-addled baking of just a shit-ton of pumpkin pies. Also: Rachel Keller, the actor playing Hollidaysburg’s nerd girl, has a slight resemblance to Merritt Wever, which totally works here.

Dawson, and Moore to some extent, is happy to carry on about art vs. commerce. But Martemucci’s movie has plenty of raunch and over-the-top moments of the aspirationally mainstream; also, it doesn’t look like anyone’s going to see either of these (other than, oh god, right, yeah, me). Also, for what it’s worth: It’s Dawson’s movie, not Martemucci’s, in which we get the rare female lead getting to act as the instigator for various reckless shenanigans.

Watching the end results of The Chair, one thing is clear: If the show was about creating the best product possible, the producers would have been best off killing Dawson’s movie and giving Martemucci the budget for both films. But a rational and logical approach never was in the cards; otherwise, would there have been a documentary crew around? And from how I see it, that’s totally rad. There’s plenty of people trying to make movies in ways that “make sense.” Only The Chair is flailing around with this strange, bold, and, frankly, slightly insane experiment. It made for riveting TV, and birthed one exceedingly watchable movie and one bonkers one.

Oh, and by the way? After a round of online voting, Dawson won the competition. He’ll have $250,000 with which to do as he pleases. And I sincerely can’t wait to see what that is.