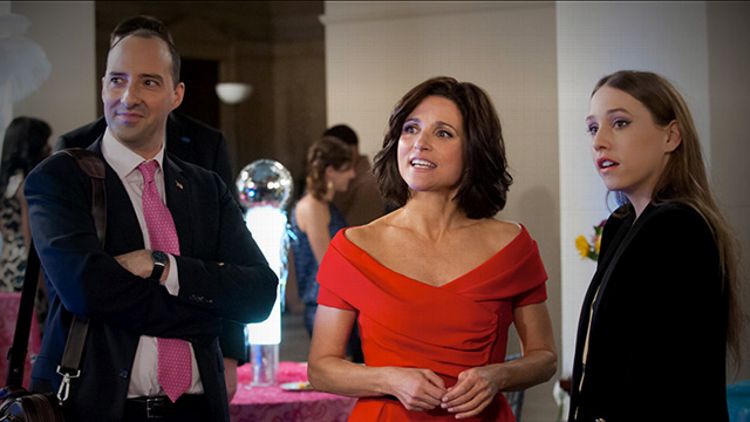 “You are the queen of confrontation. You’re my new hero.” —Jerry to Elaine, Seinfeld (“The Ex-Girlfriend,” Season 2, Episode 1)

Julia Louis-Dreyfus’s first two movies after her three-year stint (’82-’85) on Saturday Night Live were Troll and Hannah and Her Sisters, which more or less set the tone for her career. She is fantastic in both. Since Seinfeld ended in 1998, she has had two network sitcoms (Watching Ellie and The New Adventures of Old Christine) and two perfect guest stints (Arrested Development and Curb Your Enthusiasm). Curb Your Enthusiasm gave us a taste of what Louis-Dreyfus might accomplish with the freedom of pay cable, and HBO’s Veep, now in its second season, delivers on that promise. If you haven’t caught up yet with Veep, you owe it to yourself to make a day of it with Selina Meyer and her staff. While the first season was a farce about the inefficacy of the vice-presidential position that is so close to all that power and yet unable to flex it, the second season has ramped up the work-life conflict on both fronts. It’s politics as three-ring circus; either something’s fucked up in the office, it’s fucked up at home, or both.

Selina Meyer is surrounded by an equally interesting cast of underlings. Anna Chlumsky is terrific as Meyer’s chief of staff, Amy Brookheimer, a tightly wound spring whose personal life always comes last, the 2013 version of Mad Men career gal Peggy Olson. Tony Hale excels as clingy weirdo Gary, Matt Walsh’s Mike McLintock is funny even when just standing in the background eating cake, and Reid Scott is so likably smarmy as ladies’ man Dan Egan that I demand to see him as Mindy Lahiri’s next love interest on The Mindy Project. If Veep has a breakout character, it’s Timothy Simons’s Jonah: a tall glass of clam juice with a love of thrash metal and no capacity for shame. In this week’s episode he didn’t blink when someone put him down with the insult “Jonah, you’re not even a man, you’re like an early draft of a man where they just sketched out a giant, mangled skeleton but they didn’t have time to add details like pigment or self-respect.”

Season 2 has added the always great Gary Cole as Selina’s new nemesis, presidential senior strategist Kent Davison, to Veep‘s incredibly strong roster of comedic character actors. There was a memorable guest spot from Dave Foley that reminded us of how much we like Dave Foley, and also reminded/taught us that Angry Birds is from Finland. This past week we watched as Selina’s ex-husband, Andrew, an Anthony Weiner–ish charmer/snake, ran his trademark “fluffed and fucked” game on Selina during their daughter’s elaborate 21st-birthday party when breaking the news that he’d implicated her in a Super PAC scandal. The entire scene was complicated by the former couple being at a restaurant surrounded by Beltway paparazzi. They attempt to disguise alternating feeling streams of lust and anger with copious fake laughs and forced smiles, while their miserable daughter watches in horror. Julia Louis-Dreyfus’s next non-Veep project is an as-yet-untitled Nicole Holofcener film co-starring Catherine Keener, Toni Collette, and James Gandolfini (all of whom are geniuses at playing complicated, prickly characters). Holofcener specializes in female antiheroes who dare to be unlikable and are obliviously self-centered, but end up being appealing despite their awful qualities. They are the grown-up versions of the girls on Girls. Holofcener is the rare director who makes movies for and about grown women. Her characters are caustic, angry, and passive-aggressive, just like real people.

Although I’m excited to see a movie vehicle worthy of Louis-Dreyfus’s talents, I’m glad she has chosen television as her main medium. I hope there is never a time when Seinfeld reruns aren’t on somewhere, but Selina Meyer is a worthy successor to Elaine Benes.