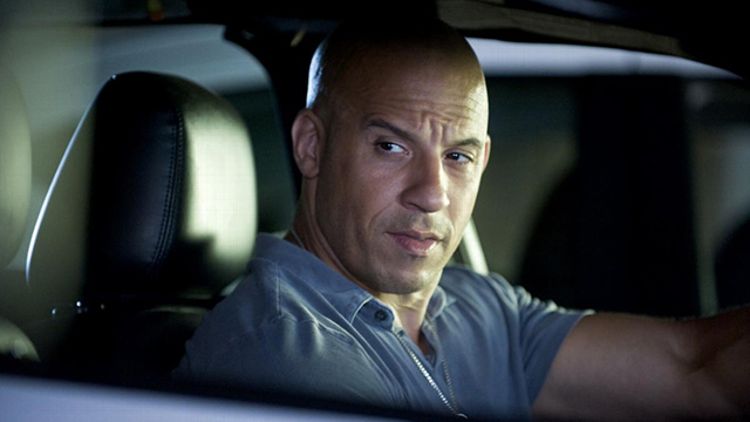 We know we say this every week, but this time it’s true: Summer movie season truly starts this weekend, with the opening of Fast & Furious 6, and we here at Grantland figured it was about time we honor the muscle-ripped, gravel-voiced heart of the franchise with his very own HOF.

Mark Lisanti: By now, we’re all probably familiar with Vin Diesel’s origin story: Once a humble bouncer in Manhattan, young Mark Sinclair Vincent was bitten by a radioactive bodybuilder during a scrap outside the meatpacking district’s infamous Gas Station nightclub, and soon after, vigilante movie-hero Vin Diesel was born. (The morning after the fateful bite, a disoriented but delighted proto-Diesel spent a full 10 hours in front of his bedroom mirror, admiring his new musculature, practicing Sylvester Stallone monologues, sewing his new white tank-top uniform, and accidentally crushing fedora after fedora, having not yet harnessed his new powers.)

You might not, however, be acquainted with Multi-Facial, the 1995 short film written by, directed by, and starring Young Vin, exploring a struggling actor’s misadventures on the audition circuit. It went to Cannes, improbably, and — smash-cut to 2013 — here comes Fast & Furious 6. You already know everything that came in between.

Here’s Part 2, because there’s no way you’re not sticking around to see how things turned out for the lightly fictionalized Mike Piston.

Alex Pappademas: From Grantland contributors and Rounders screenwriter Brian Koppelman and David Levien’s underrated 2001 directorial debut; possibly the indirect inspiration for one of the greatest listener calls in the history of Tom Scharpling’s The Best Show on WFMU (the one where the punch line is “Jason, I have literally been in 1,000 fights”); possibly not as funny if you haven’t heard said call. Either way: On behalf of his buddy Matty (Barry Pepper), Taylor (Vin Diesel) roughs up an impertinent redneck, played by professional ass-kicking magnet Kevin Gage, a.k.a. “Waingro” from Heat, a.k.a. It’s ‘Cuz Of Pussies Like You We Lost Vietnam/This Guy’s Dead from Con Air. But first, Diesel’s character personalizes the punishment to come by giving Mr. Unfortunate Redneck a précis of the violent circumstances of his upbringing. And he doesn’t just say “You have picked the wrong guy to mess with, my friend, because as the product of a pitiless urban environment whose only currency was brutality, I’m quite handy with my fists” or “You should be punched, and often, by someone who knows how, and that person is me” or “Hi, I’m Taylor, and I’ll be your bar-fight opponent today — we’ve only got one special, and it’s PAIN.”

He just says “500.” Very calmly. And the redneck guy sneers and says “500 what?” and calls Vin a douchebag and defiles his pant leg with tobacco juice. His redneck buddies guffaw, as if the answer to the question is going to be “Stuffed animals. I own them. They sleep on my canopy bed” or “Days of Summer — I cried at that movie.” You will maybe not be surprised to learn that the answer is not any of these things, and that it is “street fights,” and that “500” is a reference to the number of those that you have to have been in, according to Diesel, before you can consider yourself a “legitimate tough guy.” It’s Malcolm Gladwell’s 10,000 Hour Rule, but for street fights! It’s just so good, because Vin Diesel is so totally the guy who’d preface a head-butt with an elaborate, oblique circumlocution. All I can say about this scene is “Twelve.” That’s how many spin-off movies I wish there were in which Diesel’s Taylor Reese beats people up after cryptically saying a number. Four. As in doves. As in how many of them will be released at your funeral after I finish punching your face to death. Or Seven. As in the Prince song “Seven.” The one where he talks about his hatred of people with “intellect” and “savoir faire.” I never understood that song. Just like you don’t understand how bad I’m about to hurt you. Bonus: This scene features the best-ever onscreen use of legitimate not-tough-guy Steve Forbert’s unfadable folk-rock gem “Romeo’s Tune.” Taste these Diesel-knuckles, Margo at the Wedding!

Amos Barshad: There’s certainly flashier scenes from Fast Five — arguably the greatest installment in the franchise thus far, and the one whose box office success and out-and-out ballsiness more or less insured this thing will never die — to point your attention to. But this one has some real sentimental value for me because, right as Dom and Brian and the crew started stealing cop cars, my brother and I bet on who’d be the first one to flip on the sirens while yelling “Yeaaaaaaah baby!” or something of that sort, and I correctly guessed Tyrese and won myself a bagel. ALSO VERY IMPORTANT: Later in the movie it’s revealed that Dom didn’t actually lose the race, OBVIOUSLY, but threw it to Brian because he wants Brian to have money to take care of the baby he’s having with Dom’s sister, Jordana Brewster. Just a reminder that the only way Vin Diesel ever loses is if it helps babies.

Katie Baker: “YOU BREAK HER HEART, I’LL BREAK YOUR NECK.” This scene always made me wish I had an older brother.

Brian Phillips: How into Dungeons & Dragons is Vin Diesel? Enough that he once went on Jimmy Kimmel Live! and said the words “half-drow” and then chased them with the words “witch-hunter.” Enough that in xXx, he wore a stomach tattoo that read MELKOR in honor of his favorite D&D character, a tavern-annihilating warrior whose name he must have cribbed from The Silmarillion. We are not talking about a casual, my-friend-had-the-game-and-I-played-it-at-his-house-in-junior-high engagement with D&D; we are talking about all-in, early-edition–Manual of the Planes–owning obsession. Coffee was personally employed by Vin Diesel to make graph-paper maps look like parchment. This went on well into his adulthood; he has talked about hurrying home from the bar where he worked as a bouncer to make a late-night game session. I feel confident that he had the little leather gemstone bag for storing dice.

No lesson here. It’s just a fact about Vin Diesel. A cool fact, if you ask me. I mean, Vin Diesel probably knows what GURPs is. Whatever the record is, let that be reflected in it.

Charles P. Pierce: OK, Boiler Room is a cut-rate Glengarry Glen Ross — Ben Affleck even gets a variation on the Alec Baldwin “Coffee is for closers!” speech at the beginning of the film — but Diesel is one of the only truly unique things about it, completely a creature of The Firm, which turns out to be a pump-and-dump chop shop with the ethics of a wolverine. At the end, however, Diesel discovers a faint, flickering conscience and does Giovanni Ribisi a solid by bailing out Ribisi’s most prominent sucker. At which point we leave the suburbs of Mametland and move into actual human drama.

Robert Mays: I don’t think any movie I’ve ever seen was more affected by the environment in which I saw it than Pitch Black. I was 12 when it came out, and my best friend and I saw it in the theater. It was his first R-rated movie. I’d gone to several, but mostly because I used to fake being asleep during the second half of family trips to the drive-in. This was the first time I’d gone with a friend. (I assume his dad saw it with us, but only because I don’t know how we would’ve gotten to the theater or bought tickets otherwise. I don’t remember him being there.)

I haven’t seen The Chronicles of Riddick, and I won’t see Riddick, because they’re probably awful. I bet Pitch Black is, too — but it wasn’t then. Nothing could’ve been when accompanied by the feeling of something almost approaching adulthood. If I had to guess, I’d say that in the 13 years since, I’ve seen at least 500 movies in the theater. I don’t remember most of them, but I can tell you almost the entire plot of Pitch Black. So thank you, Vin Diesel, for playing such an important role in the formative years of my moviegoing life. Now that I think about it, it makes my undying Fast & Furious love make a little more sense.

netw3rk: The Iron Giant is the animated story of a comic-book-loving boy who lives alone with his mother after the death of his father, an Air Force captain. One day, he discovers a giant alien robot in the woods. The robot has no memory of where it came from. The boy and the robot strike up a friendship; both are outsiders, without direction. But who built the robot, and for what purpose? Is it a weapon? A soldier? A refugee? A deserter? As the comic-book-loving son of a single mom, The Iron Giant hits my sweet spot and utterly demolishes it. This makes it my favorite Vin Diesel movie.

First awesome thing about this clip of Vin Diesel recording the voice of the Giant: He’s wearing the Riddick Pitch Black sunglasses. Dude knows how to build a brand. Second awesome thing: Vin Diesel got paid untold amounts of money to essentially do death-metal burps into a microphone.

It really is disappointing how few clips of his stellar Pacifier role exist on YouTube. I swear it’s one of Vin Diesel’s realest (and dare I say finest?) performances. He achieves the “perfect guy” trifecta — sings (though not well), dances (also not well), and takes care of kids (about medium well). Plus, in case you forgot, this is the Dom Toretto awkwardly doing jazz hands and hopping about like a kangaroo.

Emily Yoshida: Mark Lisanti covered this clip when Vin uploaded it to his Facebook page a few months ago, but it still haunts me. I have so many questions. Is he karaoke-ing in an empty room? How else can we explain that slight reverb and complete absence of involuntary delighted squeals, the kind that you yourself are likely uttering right now as you watch? Are there more karaoke clips? Does Vin Diesel have a secret karaoke bunker in his mansion? Can I go there? Who is he thinking about in this clip? WHO IS VIN DIESEL SINGING “STAY” ABOUT? Vin Diesel is full of mysteries, and this clip is one of the realest things on the Internet.