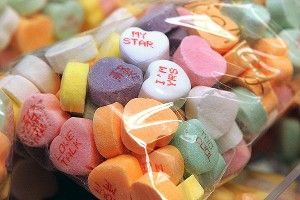 It’s Valenscience Day! “Love, arguably the most positive of all human emotions, also comes with a dark side.” Let us journey into the pink darkness together.

1. E.T. Exists: Not only that, but he knows we are out there, and is avoiding us for some infuriating, unknowable reason. Mathematician Thomas Hair says, “We’re either alone, or they’re out there and leave us alone.” Which is worse, being completely alone in the universe or knowing that there is a sexy alien love-force who just refuses to reciprocate your flirty advances on Facebook and SETI?

2. Love Is a Drug: No, really, it is. It pumps your brain full of chemicals and then bangs on your door every night and demands more hot chemicals through the peephole.

3. People Who Are “Madly in Love” With a Partner Become Jealous and Feel Aggression Toward Attractive Members of Their Partner’s Preferred Sex: They perceive other sexy potentials as competitors and then ramp up their internal threat level to red. Whether study participants regarded themselves as “laid back” or “high jealousy” in love, they still rated the pictures of “attractive, interesting, outgoing, fun-loving” people of their own sex they were shown as “unattractive” and “unfriendly.” “The surge of romantic love leads them to derogate these people. The more love they felt for their partner, the more negatively they tended to evaluate these objectively attractive members of their own sex.”

4. Blade Luvver: “A world of lonely singles finding comfort in the arms of robot lovers may be closer than expected.” Humans are primed to fall in love with complex machines, since we’ve already learned to forge faux-nurturing connections with our cars and computers. Cognitive scientist Ayse Saygin says, “We like to think of ourselves as sophisticated emotional beings, but our emotion buttons are easily pressed by low-tech devices.” Probably we won’t all just start having sex with robots all of a sudden. It will happen … gradually.

5. The Stigma Attached to Online Dating Has Lessened: Humans are no longer considered “social failures” if they turn to online dating or date somebody they met through the Internet in some way. According to another study, the social stigma around passing on a (treatable) STI is still worse than the stigma around passing on a fatal flu, with people more terrified and judgmental about contracting chlamydia than H1N1.

The Hollywood Prospectus Podcast: Greenwald and Ryan on Zombies, Magic Rivers, and Love

Listen to Barack and Get Burned on Valentine's Day