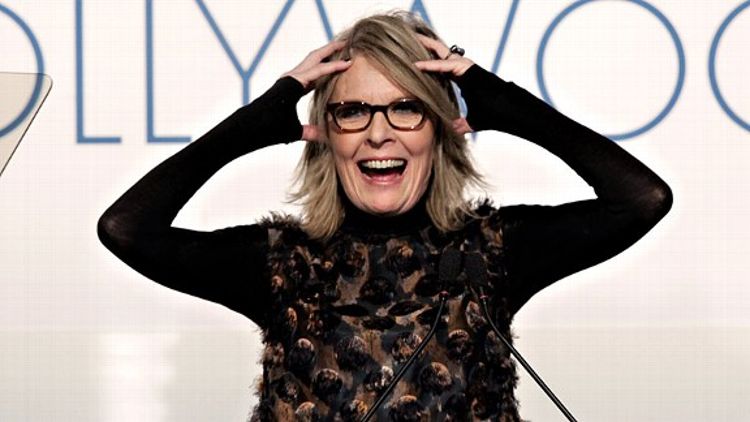 Diane Keaton wrote A Memoir! It’s called Then Again! These are the key best excerpts from the People magazine three-pager about it. Boy, did I just fall in love with Diane Keaton for the billionth time. She’s so self-deprecating and cute and charming and has no idea how beautiful she was and is. Just like in Annie Hall! I now carry a torch for her and Al Pacino.

1. She enjoyed kissing Mel Gibson for Mrs. Soffel. “I was like 39, and he was a baby! I got in the car to go home, and I kept reinventing that kiss. Over and over.”

2. “That’s why the title of my book is Then Again. Because you can go back! And almost reinvent those moments that meant so much.”

3. Her famous exes were all “unattainable greats.” She loved Al Pacino’s nose. She and Woody “tear each other apart and laugh.” If Warren Beatty “chose to shine his light on you, there was no going back.” Jack Nicholson was “born to seduce.”

4. Her mother Dorothy was “a homemaker whose motto was ‘my life is this family’ but who had unfulfilled dreams” but “wrote, took photos, and was crowned Mrs. Los Angeles in 1955.”

5. She was a C student. “I think I had ADD, instead of listening I’d be lost in the teacher’s face.”

6. She self-deprecatingly compares her young self unfavorably to (model) Candice Bergen. “I was friendly looking, no Candy Bergen. The smile, maybe, was all I had.”

7. She became bulimic because she was offered her first gig, Hair, on the condition that she slim down. “I don’t think it was called bulimia then. It was just this trick you could do. It’s a horrible problem.” She says therapy helped her recover from a five-year struggle with the eating disorder and one day just “didn’t open a half gallon of rocky road ice cream.”

8. She started dating Woody thereafter. He never knew about her bulimia but commented that she “could really pack it in.” She and Woody are still good friends.

9. More on Woody: “I loved his body. He’s beautiful! You’ve got it all wrong.” She quotes his letters in the book: “I have decided to let your family make me rich! Rich, do you hear?”

10. Her main dating criteria: “Talent is so damn attractive.”

11. She dated Steve Jobs “a few times in the eighties” but “he’d start saying things about the computer and I’m going ‘I have no interest.’ Do you believe it? So that was the end of that.”

12. More on Beatty: “He was romantic and very kind.” He surprised her at the airport and held her hand through a cross-country flight she was nervous about (and then flew right back).

13. More on Pacino: “Charming, hilarious, a nonstop talker. There was an aspect of him that was like a lost orphan, like this kind of crazy idiot savant. And oh, gorgeous! I was mad for him. I worked hard on that one.” She gave him a marriage ultimatum and it was over: “I went about it not in a perfect way.”

14. “Never married, she thinks she didn’t find ‘a home in the arms of a man’ as she puts it, because of her mother’s cautionary tale. ‘There was a sacrifice she had to make in not having a career. I knew marriage was not going to be a friend to me.'”

15. She lives with her two adopted kids in Bel Air. Having two sons is “better than any of your fantasies about love. It is love.”

16. She is a spokeswoman for L’Oreal and recently shot an ad campaign for Chico’s.

17. “When these kids leave me, I’ve gotta figure out a new idea. Like maybe, I don’t know, open a dog shelter or something.” :(

20. “She’s not in the market for romance either. ‘Maybe I’ll buy a companion,’ she muses. ‘But dating terrifies me. Can you imagine anything worse?'”

21. She wrote the book because her mother, Dorothy Keaton Hall, got Alzheimer’s and passed away in 2008 and she realized the “urgency to her interest in preserving memories.”