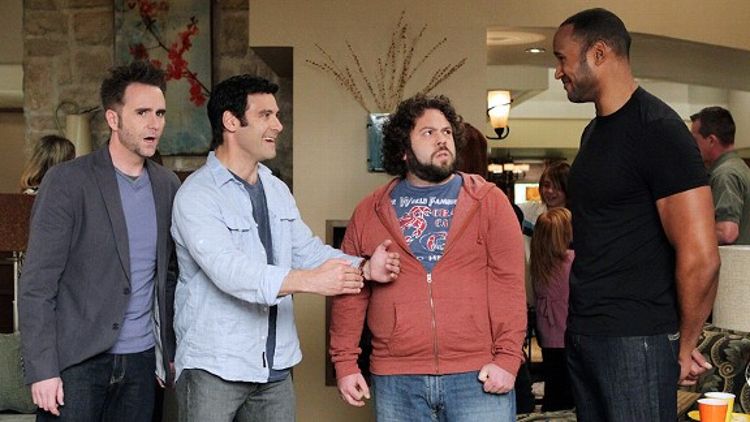 Truly, these are magical times. We can store music in clouds, discover new, life-supporting planets and, here on Earth, we can marvel as a simple movie about a vampire eating a newborn baby out of a womb can charm and bewitch a nation. So, in light of this, you’d think we’d have a better way to calculate television ratings by now. But no: while Google knows what you had for dinner last night the Nielsen company still relies on hardware lifted from the Knight Rider set to track the nation’s viewing habits. Even worse, the most important time of the year for the networks, the quarterly “sweeps” period that can make or break shows (not to mention corporate bottom lines), casts a wider net by going even more old-school: during November, February, May and July the company collects hand-written paper diaries from pre-selected households. That’s right: paper diaries. Not even the earnest dullards of Terra Nova went that far back in time. But the fact remains: the ratings fate of Community is being decided the same way your baby sister decides which boys are cute enough to invite to her sweet sixteen party. (“Dear Diary, NCIS: Los Angeles took a real hit in the core 18-49 year old demo last night. Totally uncool. XOXO! Nielsen Girl.”)

All of this is to say something we few, frazzled members of Grantland’s inaugural Fall Television Cancellation Fantasy League already know well: TV is a crap shoot. Of the twenty-four shows selected in our League back in September, seven have been cancelled outright while numerous others are essentially doomed, merely playing out the string like unloved convicts on Death Row who know, in their heart of hearts, that a phone call from the Governor, or, say, Netflix, isn’t forthcoming. Of the rookies that could be considered successes — Revenge, perhaps, or Once Upon a Time — none are breakout hits or game-changers. The 2011 fall season will be remembered, if it’s remembered at all, as a time when the networks retreated rather than innovated — any Home Improvement spec scripts laying around since the Clinton administration could easily find a home on Last Man Standing — and punted rather than scored. If any of this season’s newbies make it to 2012 it’ll be a sad hash of the familiar (The Secret Circle is The Vampire Diaries for witches, Ringer is Buffy for buffoons) and the faltering (Person of Interest isn’t while Unforgettable is). Zooey Deschanel’s adorkable and adequately rated New Girl is far more adventurous than any network head and she’s a thirty-year-old adult who can’t say the word “penis.”

This lack of risk-taking may prove to have been a fatal mistake, and not just because NBC recently discovered all those bunny suits are non-refundable. As Business Insider reported last week, the death of television as we know it may be just five years away. Television shows will continue, of course, but the network’s primary revenue model — that they will debut expensive programs in the fall, you will watch at least some of them, and advertising money will flow like merlot in Cougar Town — is as endangered as, uh, Cougar Town. While the cable nets get all the prestige – and, recently, all the ratings — the big four (plus NBC — burn!) have settled into a nether zone of old-fashioned sitcoms, reliable procedurals and head-scratching remakes. The system is broken and they gave us 2 Broke Girls.

But this is all gravy to the doomsayers and failure fetishists of a Fall TV Cancellation League, a place where termination is its own reward. As you can see from the results, this year’s contest wasn’t close — and, in fact, most of the scoring was sorted well before the Nielsen company received its shipment of carefully curated moleskins. But even if the action in our inaugural league ended up less dramatic than an average episode of A Gifted Man, we still felt duty bound to share the outcome. The League may be back in the spring with tweaked scoring opportunities and, no doubt, a Nielsen slam book of animosity towards a certain television-centric writer who demolished the competition and is currently typing in the third-person. Mid-season is a whole different ballgame.

To sum up, it’s worth noting that while the future of network TV may seem punishingly Grimm, for dedicated fantasy players, those with visions of Work It cross-dressing in their heads, it’s never looked brighter.

(All quotes and scoring opportunities from Deadline.com.)
(Parentheses means the action occurred previously.)

Andy Greenwald (Homeboys In Outer Space): 2140 points
How best to comport oneself in a blowout? As the points pile up and the outcome becomes more inevitable than a crass ethnic joke on a Whitney Cummings sitcom, is it better to be a Kobe — taking nothing for granted, still poring over print-outs of thefutoncritic.com with an eye towards the midseason — or a Madsen? I can’t say I’ve been dancing, exactly, but ever since three-quarters of my team went belly-up before November 1, I have been smugly taking my sunglasses off and then putting them back on again a lot, like David Caruso in a strobelight factory. Look, it’s not my fault I can sniff out network stinkers with all the graceful economy of a truffle-hunting pig. And I won’t apologize for knowing you can never go broke underestimating the sense of humor of the average Nielsen family and thus avoiding Last Man Standing and 2 Broke Girls. The only people who have ever come close to losing it all by targeting the bottom of the barrel are the suits at NBC. As for beating my boss by margin higher than a perfect SAT score? Well, all I can do is release my inner Birdman and ask: Y U Mad, Dan Fierman?

Yes, the scoreboard may never have been in doubt but that doesn’t mean the season wasn’t a fun one to observe. It’s one thing to passively accrue points for someone else’s failure and another to openly root for it. Outside of the snarky charms of Suburgatory did any of this season’s new shows deserve a spot next to Chopped on your DVR? There aren’t this many turkeys in a Butterball slaughterhouse. Though our enterprise may have been cynical in its design it was certainly no worse than the Mad Men-baiting Pan Am, a show as edgy and intoxicating as a slushy virgin daquiri. At least last season had Lone Star, a risky, wholly original drama as inspired as it was doomed. So let this be a lesson to the back-benchers in Burbank: when there are no good shows to cheer for, we end up cheering for something else entirely.

Dan Fierman (The Heat Vision and Jacks): 425 points
I blame myself. There’s nothing worse than looking back at the draft board, realizing Durant (Playboy Club) was sitting right there and knowing you took Oden (Grimm). I stand by my scouting: Friday night death slot. Supernatural premise. Floundering network. But, in retrospect, a Mad Men Ripoff heavy portfolio was the way to go. At least I saw the death of Prime Suspect and Allen Gregory. But it’s cold comfort.

Lane Brown (The Viva Laughlins): 75 points
If there’s one lesson to be gleaned from the disappointing non-failure of I Hate My Teenage Daughter — which was my last hope for cancellation points this season — it’s that America is finally ready to dislike children again, which means it’s time to bring back Kid Nation. And if there are two lessons to extract, the second is that it’s shockingly still possible for pretty much everybody to overestimate the tastes of American audiences, which is encouraging news for the networks, particularly CBS. And if anybody has time for a third lesson, here it is: I totally sucked at this game! Congrats, Andy.

Chris Ryan (Remember the Terriers): 625 points
I really should have known better. Last week, as I returned to Whitney in much the same way Ellen Burstyn returns to diet pills in Requiem For A Dream, I had something of a realization. As Chris D’Elia’s “Alex,” noting an Ambien-riddled, sleeping “Whitney” (played assuredly by Whitney Cummings), began to pleasure himself in bed … on the NBC network … on a Thursday night … it occurred to me that of the many mistakes I’ve made in my life (slandering the Croatian mafia, dating a someone taller than me, drinking milk on a hot day in San Diego), choosing Whitney with my first pick in the Grantland TV Cancellation Draft might be No. 1. Regrets, I’ve had a few.

Should Whitney have been cancelled? Sure. I guess. Was there ever a chance that this Two and a Half Men (minus one and a half men and plus a feisty, neck-snapping woman) style sitcom was going to get the axe? Not in this lifetime.

So here I am, a loser, sitting at a bar muttering, “I used to be in a Cancellation League … it’s a tough racket.” What do they call it when you pick a quarterback and receiver on the same team for your fantasy squad? Handcuffing? Sentencing? That was my thinking behind Whitney and Up All Night. I clearly underestimated the audience for comedies about having kids and not wanting kids.

At least I got How To Be A Gentleman right. In terms of America’s thirst for a G-rated comedy featuring Cricket from It’s Always Sunny… and Johnny Drama from Entourage I am basically psychic. Catch me reading tarot cards at a dilapidated boardwalk near you.