The ‘Playboy Club’ Bad Enough Without the ‘Mad Men’ Comparisons 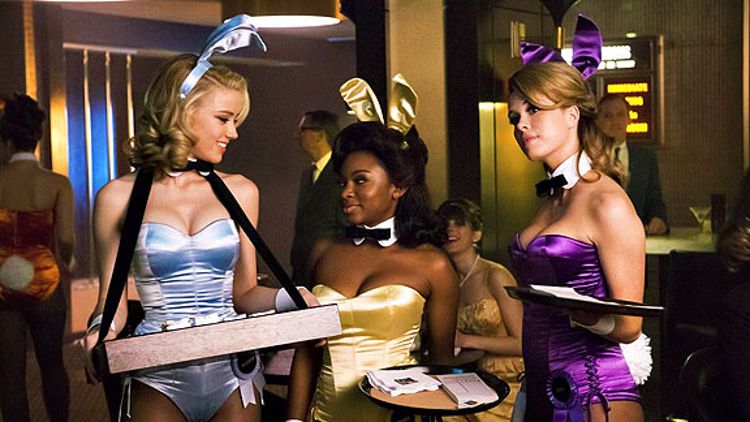 It’s unfair to NBC’s new The Playboy Club to compare it to Mad Men just because the two are both set in the early sixties, showcase copious amounts of smoking and boozing, and feature Naturi Naughton as a self-proclaimed “chocolate bunny.” It’s a lazy and simple comparison, even if frequent Mad Men director Alan Taylor shot Playboy’s pilot and the show is built around a bullet-headed dapper don who has a thing for both the ladies and maintaining a double life. In fact, it’s best if we never mention Mad Men again when discussing The Playboy Club. It’s reductive and demeaning. Because, honestly, The Playboy Club is perfectly capable of being a terrible show all on its own.

Any doubts about Playboy’s bad bona fides were swept away at the five-minute mark of last night’s premiere when an attempted rape was disrupted by a high-heel puncturing a remarkably bloodless throat. The owner of said throat? A local mob boss! Luckily, the goomba’s jugular isn’t the only bloodless thing to be touched by Amber Heard’s blonde Bunny Maureen — there’s also Eddie Cibrian’s Wan Draper, a handsome cipher named Nick Dalton. (We’re sure of this because it’s what everyone calls him: “Nick Dalton.” The 1960s: a time before civil rights or nicknames.) Our Nick (Dalton) is a former mob lawyer trying to turn his life around by running for office and hanging out at Hef’s neverending party, which in the hopeful, blinkered eyes of showrunner Chad Hodge is less a proto-stripclub and more of a hotbed of fantasy liberal uplift. Only in this one shag-carpeted speakeasy in Chicago, the show tells us, could women be anyone they wanted, provided, of course, that they wanted to be a cocktail waitress in a sexy rabbit costume. In case there was any mistake about the equal opportunities enjoyed by these underdressed gin-slingers, there’s a pointed expository scene making it perfectly clear that though they may dress like it, these womyn are not hookers. Dream big, ladies!

We know, we know: harumph. No one likes a wet blanket at a sausage party. The truth is, there’s really no problem setting a sudsy, throwback soap in such risqué surroundings — Laura Benanti in particular manages to suggest if not oceans than at least puddles of depth within her soapy character, singer/officer manager Carol-Lynne. The problem is in the execution. Nick (Dalton!) isn’t a fully-formed human being — he’s a collection of dreamy attributes that need to be spelled out for us by other characters. Explaining the magnetic paradox that is Nick (Dalton), Naughton’s chipper Brenda swoons “that he’s brilliant, that’s he’s a fool … that’s he’s everything you want. And he’s everything you don’t.” Sorted! Good to know Final Draft now comes with a “Vertical Horizon” setting. Even with so little to play with, Cibrian does himself no favors by attempting to Hamm it up at every turn, whether he’s close-talking a dame or gesturing with a rocks glass. We half expected to catch a glimpse of Nick (Dalton) poring over the black and white photos of himself that line every wall of his mega-mod apartment in desperate search of a backstory. In truth, Cibrian and Heard make a perfect blank pair, the sort of unreal Hollywood robo-people who are nonplussed by a corpse yet immediately throw off the yoke of societal conventions and, in Heard’s case, the strap of a cigarette tray when confronted by a spirited Tina Turner impersonator.

Actually, the musical numbers, while incongruous, are the only time The Playboy Club loosens its bunnytail and swings. The rest of the limp hour passed watching Cibrian and Heard flirt over a mutual hatred of water and feeling immense sympathy for David Krumholz, working harder than the real Ike and Tina to give his nebbishy club manager both a genuine human presence and a real-deal Chicago accent. The issue with The Playboy Club — and the reason why we’re thrilled it was our number one pick in the Fall TV Cancellation Fantasy Draft — is that, unlike these fictional Bunnies, a network television show in 2011 really can’t be anything and everything to all people. Attempting to be equally tawdry and tame is an impossible task. Yet The Playboy Club insists on having its cheesecake and eating it too: All the scantily clad women here are either careerist saints or furthering the cause of gay rights via clandestine meetings and cash tips. There are no bad motives, no bad guys who aren’t cartoonish Mafiosos. The racism and sexism that exist outside of the club are mandates delivered from other people, people most likely dressed in less-enlightened animal attire. Our protagonists are noble victims and refugees from it all, struggling to make a better planet through dancing and never-ending packs of Newports.

Only Naughton’s Brenda demonstrates a sense of a world beyond Hef’s gilded walls but then, insanely, suggests that she’s part of a larger societal struggle when she encourages Heard’s Maureen to head downstairs in her nightgown because a millionaire is “pouring champagne” down everyone’s throats. You’ll forgive us if we’re having trouble choking it down.

J. Edgar Trailer: Clint Eastwood and Leonardo DiCaprio Get in The Spirit