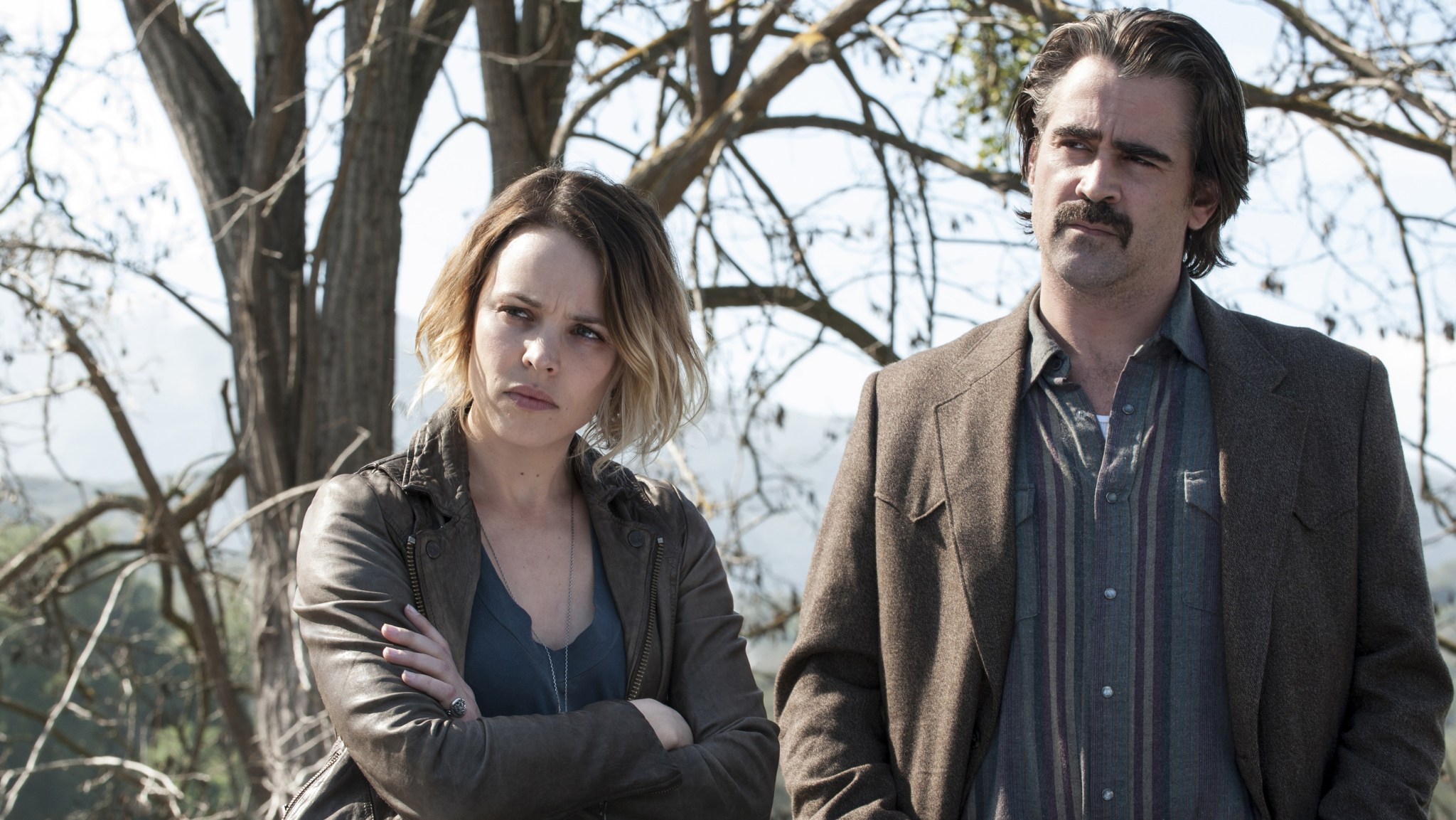 Let’s do some judging. That’s what we’re all here for, right? So often with prestige dramas, we talk about issues of likability. This character is “the worst,” or that character did or didn’t deserve what happened to them. A show’s larger themes can easily get pushed aside for more immediate concerns about whether we like its characters. This makes sense. In a world where we are inundated with entertainment options, who really wants television to be a form of punishment? Investing hours in fictional people is something we willingly do, provided we get some kind of return on that investment.

And if you can’t be good, be good at something. In the absence of likability, we ask for excellence. We want Walter White to become Heisenberg, Don Draper to buy the world a Coke, Jimmy McNulty to save a city.

So what do we do with Colin Farrell’s True Detective character, Ray Velcoro? He’s about as good a cop as he is a father, and let’s just say no one was sending him greeting cards on Sunday. Velcoro is an ex–Los Angeles County Sheriff’s deputy, seemingly exiled to the city of Vinci, where he is now a detective. He smokes weed, does bumps, and brown bags whiskey — except who needs a brown bag? He’s the law.

In its first season, True Detective was a show about the destructive side effects of having or lacking empathy. If you looked the world in the eye, as Matthew McConaughey’s Rust Cohle claimed to have done, your only option was to become a mad preacher, sermonizing about the illusions under which we all live.

The alternative is to do what Woody Harrelson’s Martin Hart attempted to do: lie — to yourself, your partner, your wife, your kids. Say whatever it takes to make it through another night, hoping that the morning apologies will make it go away. The early episodes of the first season were about the tension between these two ways of living — confrontational honesty and constant fabrication. You could search for the Yellow King, Reggie LeDoux, and any number of other bogeymen. The real quest was finding the true way to live a hard life. Any life, really. All life is hard. One of these detectives was smart, the other was steady.

Ray Velcoro is neither of those things.

He is a father who calls his son1 a “fat pussy” when the child is tormented. He uses the power of his badge to beat the father of his son’s bully within an inch of his life. He is a husband who tries to pay a family court lawyer in cash. And he is a cop who takes an opportunity for personal revenge and a subsequent career of professional corruption. What’s to like?

I can pay no higher compliment to Farrell than to say his performance is so captivating that it pushes aside all conversation of likability. He is not just the main attraction of this second season of True Detective, he is the sun that keeps it alive. Based on the small-sample-size theater of one episode, we have witnessed a bit of Skynetification with True Detective — it has become self-aware. For the most part, the actors are performing as if they know they are on True Detective. The lines they speak are written in the cadence, and imbued with the Kierkegaard CliffsNotes wisdom, that we have all come to know (and love to quote out of context) as “True Detective speak.” Vince Vaughn’s Frank Semyon says things like, “This place is based on a codependency of interests,” gesturing with a whiskey glass to what is basically Commerce Casino. Justin Lin’s camera has yet to find its own way of looking at this world, still seeing things through Cary Fukunaga’s stylishly tinted glasses. Overhead shots of freeway exchanges and oil refineries come and go, with none of the haunted impact of the first season. Back then, shots like that were world-building; now they are simply mood-sustaining.

Farrell is the one thing in the show, so far, that feels new and real. I can’t recall seeing someone with this kind of vulnerability — this kind of irrevocably damaged presence — on television. When he sees his kid get taunted in the schoolyard, his hair shakes with rage and shame. When Semyon tells Velcoro, in a flashback, that he knows the identity of the man who raped and assaulted his wife, Farrell makes this seemingly unconscious twitch, at once an aggressive and defensive move. He is adjusting his holster, but he’s also touching his stomach. Probably because the bottom is dropping out. In every scene, he has the eyes of a captured coyote. He is searching for some kind of escape.

This is a performance that transcends likability. We are not seeing a hero’s arc, we’re seeing a very human arc. And sometimes, that’s going to be very hard to look at.

Rust Cohle was supposed to be cool — like an amalgamation of John Wayne, Dean Martin, and Ricky Nelson from Rio Bravo — morally certain, drunkenly charming, and very, very pretty. Farrell is none of these things. He is not cool. When he talks, it’s with a pinched, nasal voice that’s uncomfortable with being heard. He repeats lessons on fatherhood that he’s read in a book. As for his look, I can’t claim to be totally up on the fashion trends of industrial Los Angeles law enforcement, but with his bolo tie, Magnum, P.I. mustache, and ’90s Christian Slater hair, he looks like the monster created by someone who has spent too many late nights watching too many cop shows and Westerns.

Dr. Frankenstein, in this case, is played by Nic Pizzolatto, a crime-fiction writer turned screenwriter turned HBOteur. After Fukunaga put his directorial stamp all over the show’s first season, True Detective’s second installment is Pizzolatto’s baby.

You can tell. This feels more like a writer’s show now. It has more in common with sprawling James Ellroy novels The Big Nowhere and L.A. Confidential than the Cajun Eyes Wide Shut visual meditations of the first season. Pizzolatto is going for broke — doubling the amount of central characters to four and widening the scope of his story.

There are still hints of the occult elements that were so attractive to some viewers of the first season — the bird mask in the front seat of a Cadillac, the sexual accessories in the city manager’s house — but this feels a lot more like the everyday world we know, not the vapor-trail Gulf purgatory of Season 1.

The folded-in-on-itself California that we see (vineyards! PCH! Sherman Oaks! Desert casinos!) looks much like the California that actually exists. And like the state it is set in, this story feels huge — Russian oligarchs and local racketeers; disappeared civil servants and missing migrant workers; stoned starlets and Internet pornography; a rail line through the Central Valley and the corruption that surrounds its construction; gangsters going straight, cops going off the rails; New Age religion and sexual depravity. Rachel McAdams’s Ventura County Sheriff’s detective and Taylor Kitsch’s highway patrolman have issues, inside and outside of the bedroom. Vince Vaughn’s character says things like, “Big day … all the marbles,” and needs help with his cuff links.

This season’s opening episode, “The Western Book of the Dead,” felt like the first page of a notebook — ideas, lines, looks, characters, phrases, and themes are in abundance. There’s a lot to parse, and I’m sure that over the next seven episodes these scribblings will begin to look more coherent. I remain a true believer in True Detective — there are very few first episodes of a season, much less a series reboot like this one, that wind up being among a show’s best.

What struck me most was how every major character has already experienced some kind of failure — as a cop, father, businessman, sister, daughter, boyfriend. These are the kinds of people you often find in crime novels. They are more scarce on television. Among the giant dildos, Viagra pills, brass knuckles, midcentury modern furniture, and bottles of Modelo, there was barely a single smile cracked. Granted, there wasn’t much to laugh about, but I wonder how long this mood — this misery — is sustainable. Woody Harrelson is not walking through that door. In some ways, Farrell’s Velcoro could be as perfect an avatar for this season as McConaughey’s Cohle was for the first. Humorless and hurting, with no foil to make fun of him for us. Maybe that’s not the point. Maybe we get the True Detective we deserve.