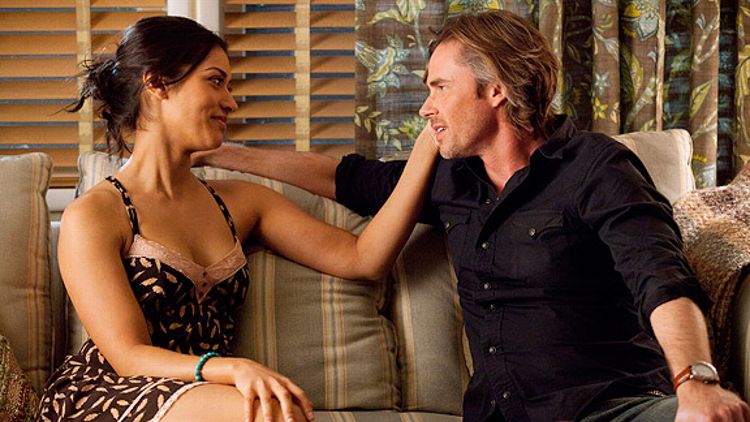 The theme of this week’s episode of True Blood is “taking advantage.” What exactly it means to exploit another person’s weakness (or strength) for personal gain. Sookie is constantly given opportunities to exploit the men in her life, and she wavers between staunch refusal to even engage with the idea and then biting her lip like “well mayyyybeeeee just this one tiiiiiiiiiime.”

We start where we left off: Vampires want to know where Eric is hiding, but for some reason they don’t go check for him at the Bon Temps franchise location of Senor Frog’s — Monsieur Crapaud’s. He is shitty drunk in a sleeveless sweatshirt and some hoop shorts wandering alone down the road like a David Lynch movie and then harassing Sookie. Cut to bloodsucking HBIC Pam, whose wardrobe is extra-stolen from Sasha Fierce’s closet this week. It’s like they realized that Pam is everybody’s favorite character, which has nothing to do with the core fanbase of this show being sexually aggressive older women and gay men (and the guys who are forced to watch HBO with them handcuffed in bed).

The pointy shouldered head vampire lady advises King Bill on the burdens of wearing the crown, and then this season’s Big Bad/Dark Phoenix/MacGuffin between sex scenes — Marnie the witch — has a plot-heavy sepia-tinged flashback to a witch burning where she chants a younger witch down off the stake. Because powerful women are scary, witches, and/or lesbians? Is True Blood commenting on that idea or just reinforcing it? I can’t tell yet.

All the dudes are extra naked this week and the chicks are especially clothed, except for Crystal the psychotic werepanther, whose mouth is up here thank you. (Yes, Jason’s panther-rape situation is ongoing, what with the awesome Lauren Weedman sexually abusing him, and then letting in the nerdy girl who plays Clare on Degrassi: The Next Generation to devirginize herself while a straight-out-of-central-casting creepy old man yells “Breed Ghost Daddy, Breed!” Subtle, this show.) Marnie won’t undo the brainwashing spell she cast on Eric. Marnie really seems like a chill lady to sip on some Celestial Seasonings herbal tea with. I don’t know how anybody could be scared of her. Necromancy, whatever. So much fun in a book club! She agrees to give it a shot and daubs some essential oil on her temples, but performance anxiety defeats her.

A skinny-dipping Eric says “sea-monsters” in his goofy Swedish accent and arouses the angerlust of Alcide, who shifts from being a werewolf back into a Chippendale. Before Sookie can contemplate the possibilities of a potential lakeside threeway, Eric gets sunburned and has to be taken back home like a big Viking baby who can’t get tan. Will Sookie ever have a non-Caucasian love interest? The werewolf seems kind of Jewish.

Sam goes to see Luna (the horse chick) and finds out she has a young daughter. True Blood message boards are so mad at Luna. They say, “She doesn’t fit the look of the show.” What they mean is that she’s terrifyingly hot on a show that is mostly a fantasy about more average (for television) women dating way the hell out of their league. But the woman playing Luna (Janina Gavankar) is a very good actress, and the character is written as more than just a hot chick because this is True Blood not Entourage so stop. Hatin’ is bad.

Sookie and Alcide have some sexy porch banter while Eric eavesdrops from his basement holenook. Then Sookie and Alcide do a bro hug if you hugged your bros while nestling your way into their flannel-clad chests and nuzzling them gently. Jason reenacts The Jungle Book by jumping out of a tree with a pole and stabbing a panther to death. God, yes, Jason, run away from this plot line. Run towards Merlotte’s, towards anything else.

Arlene’s devil baby writes “BABY NOT YOURS” on the wall so Terry can see. I don’t know why they’re freaking out so bad, that baby can write sentences! It’s a baby! Wow! Sookie won’t make out with Eric because, well I don’t know why, because she clearly wants to. Bill comes to Sookie’s because it’s so easy for vampires to Facebook message their exes IRL.

Sookie is in a lot of almost-kiss clinches this week, even for somebody whose life has more almost-kiss clinches than any actual person’s life has ever involved. Jason is now the one wandering naked by the side of the road like Cajun Mulholland Drive. There are always a lot of convenient cars driving by on this show. Jessica and Hoyt pick Jason up and Jessica feeds him, and Jason looks at Jessica in a way that presages future trouble.

The coven hits Pam where it hurts: in her vanity. Despite the fact that she still looks great in a corset dress, she cannot escape her eventual vampire destiny of being a billion years old and evaporating into dust. To say that True Blood was especially heavy-handed this week about its messages would be to imply that it is ever not. Lord love a shapeshifting duck.