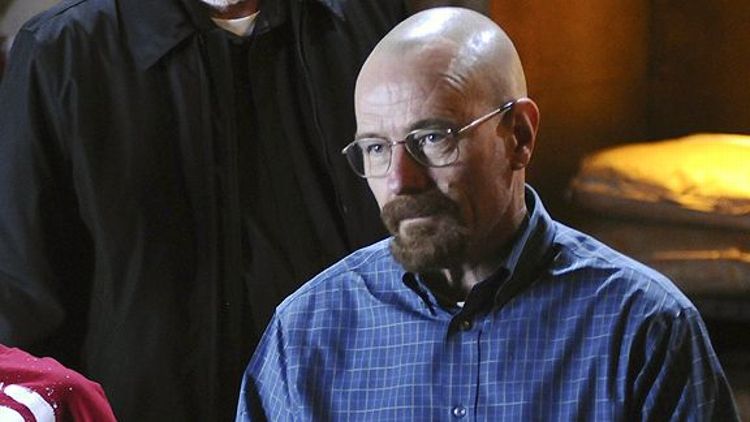 Predicament: A week after learning that he will likely lose his house in the divorce, Larry isn’t really a victim in the second episode of season eight, although he does enjoy being surrounded by victims. After finding out that the hysterical Chubby Hubby-blocking woman in the grocery store and the woman who lets her dog do its business all over Larry’s front lawn are both residents in a posh safe house for battered women in his neighborhood, Larry accepts an invitation to deliver a pep talk to the gals. When their washing machines break down, he offers his own. Furthermore, he hones his amateur dermatologist skills by noticing a mole on the breast of Richard Lewis’ burlesque-dancer girlfriend. He’s also responsible, somehow, for her decision to get a breast reduction, and for Curtis “Booger” Armstrong losing his laptop and for an innocent good Samaritan being arrested for domestic violence.

Henpecking: Gets a shiner after implying that Dale, the largest of the women in the safe house, would be able to hold her own in any physical altercation. The police mistakenly, but understandably, hold Leon responsible.

Insecurities about appearance, health: Stella thought Larry would be older based on Lewis’ description of him.

Proclivities towards violence: Larry relishes the chance to be a savior to victims of violence, only to become one himself.

Xenophobia/racism: Mistakes a black guy with a Powerbook for the black guy he asked to watch Booger’s Powerbook.

Predicament: Running a secret $8 million methamphetamine superlab underneath an Albuquerque dry cleaners isn’t like many jobs, but regardless of profession, ordering the murder of your potential replacement is going to have dire consequences. Walt finds himself having to plead to Gus Fring for his and Jesse’s lives, only to watch Gus slash Victor’s throat instead, sending a clear message that further insubordination will not be tolerated, and that it’s best to keep box cutters out of reach altogether. Injury is avoided, but insult is not, as Walt and Jesse are once again forced to dispose of a body via hydrochloric acid, turning poor, relatively innocent Victor into a mere spinal cord floating in a vat of red goo. Further humiliation comes as the pair are dismissed and forced to wear matching Kenny Rogers t-shirts and white pants at a Denny’s.

Henpecking: None directly, but Skylar moves Walt’s Aztek three blocks away, lest anyone think he’s moved back home, and hornswoggles a locksmith into letting her into Walt’s apartment for some fruitless snooping.

Insecurities about appearance, health: There is some justifiable concern that an encroaching massive pool of blood might ruin his shoes, but some pants-size issues aside, Walt is not self-conscious about his replacement outfit. Doesn’t even take the size sticker off the shirt, in fact.

Career frustrations: Even though Hank’s medical bills are piling up, Walt is confident enough in his financial stature and his cooking skills to gamble — correctly, as it turns out, for now — that he is indispensable to Gus’ enterprise. He is held down by the Man, literally, when he attempts to get out of his chair and step to Victor, and is visibly stressed by the whole possibly-about-to-be-murdered-by-the-boss thing.

Proclivities towards violence: Walt doesn’t kill anyone per se, but it’s safe to say that Victor’s blood is on his hands. And face, and legs, and…

Xenophobia/racism: Walt ridicules Victor for thinking he can cook the formula, but this owes more to lack of chemistry expertise than ethnic background.

Predicament: A gig in the shitty lounge of the Trump Taj Mahal in Atlantic City sours fast when bored audience members talk over his routine and leave to play blackjack and he goes on a tirade against gambling and Donald Trump. After being reminded that his contract forbids disparaging the audience, the casino, and Trump himself, Louie quits rather than agree to muzzle himself, then takes solace watching Joan Rivers kill in the casino’s theater. He introduces himself to her after the show, and she invites him to her suite, where she chastises him for being so cavalier about a paid job. It ends weirdly.

Henpecking: Gets slapped in the face by Joan Rivers, who then agrees to sleep with him, but as long as he promises not to tell anyone. Especially Melissa, who thinks her mom is still a virgin.

Insecurities about appearance, health: In opening stand-up segment, Louie reveals that he can go no longer than 48 hours without having diarrhea and that his daughters often have to bear witness to this. But none of this indignity seems to particularly bother him.

Career frustrations: Resents having to play the shitty lounge and compete for attention with slot machines. Rivers reminds him that she was playing that same shitty lounge two years ago and could be again in another two, while he could then be in the nice theater, so long as he doesn’t take jobs for granted. He apologizes to the hotel and agrees to the terms.

Xenophobia/racism: Language barrier with deli cashier in cold open segment leads to misunderstanding of the word “pulp,” delivery of 60 bananas.

This week’s most powerless: Louis C.K.

As sage as Joan Rivers’ advice may have been, a sexual encounter with her dramatically sagging vagina will not do his self-esteem any favors.