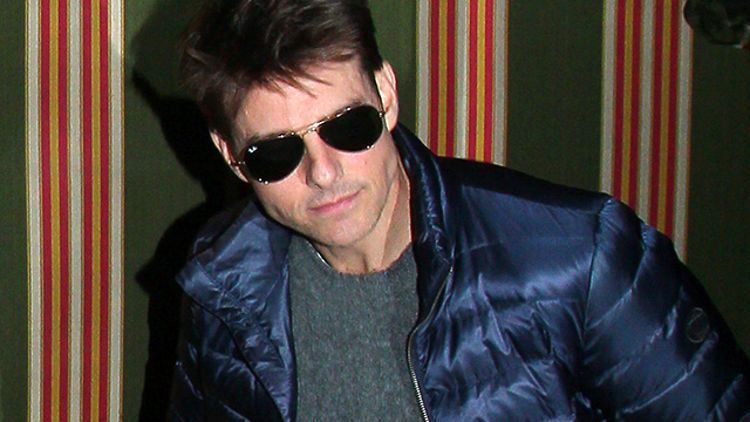 Tom Cruise’s Midlife Crisis: “Alone and awkward, Tom Cruise wages a futile battle against time.” Tom Cruise is mortal? “He’s kind of broken. He’s too concerned with what people think.” Tom has been hitting clubs in an attempt to get over his divorce. “Tom’s trying to look cool and go out and be hip, but he just looks silly and icky. He’s going through a midlife crisis.” His 50th birthday may be to blame. “Midlife crises become acute if a man’s life is marked by failed marriages and strained relationships.” Turning 50 in itself can be “a traumatic event for many men.” He hasn’t seen daughter Suri in two months. “He’s lost his place as a husband and father.” He’s also worried about his career. “Tom is very nervous about being eased out of big action star roles.” That doesn’t have to be an issue necessarily, as men get to play leads much longer — just look at 60-year-old Liam Neeson headlining the Taken franchise. Tom has no idea how to be single. At a London club “he looked awkward and uncomfortable. The rest of the club was dancing, but Tom was in a corner talking to a woman like it was a business meeting. As rich and famous as he is, Tom just doesn’t know how to fit in.” A therapist says that Cruise “has to confront that his power is shifting.” NEVER!

All Canadian Celebrities Are Related: Justin Bieber and Ryan Gosling are “11th cousins once removed (their shared progenitors were a couple who immigrated to Quebec from France in the 17th century.” Avril Lavigne is related to both, which makes her Bieber’s 12th cousin. Oh, and Celine Dion is Justin’s 10th cousin, thrice removed. Oh god, what if Avril Lavigne is related to Chad Kroeger?

Taylor Swift’s Kennedy Romance Over? “She’s been complaining that love with a teenager is hard.” I mean duh, that’s what her whole career is based on. “She’s tried everything possible, but the long distance is getting to her.” Not to mention the boarding school curfew. “He has to be back to his dorm by 9:45 p.m. during the week, and by 11:30 on Saturday nights.” Taylor Swift should date Katy Perry.

Katy Perry’s Brother Is on Point: “It’s no secret Katy Perry has worrisome taste in men — and even her younger brother has warned her about her choices.” Her younger brother David Hudson says, “Multiple times I’ve said to her, ‘I don’t know about that dude.’ She shrugs it off. Katy needs to be with a true gentleman. She needs someone who’s on her level of success but will still treat her with respect.” I can just hear the sound of David Hudson rolling his eyes at John Mayer right now.

Tyra Banks: “I’ve been afraid of dolphins ever since I was 8 or 9. I have dreams that I’m in a pool and there are dolphins bumping me and I’m frightened.” Her guilty pleasure is “whipped cream. I’m obsessed. I sit on my couch and take the canister and squirt it in my mouth.” The secret to smizing is “to make your mouth really dead — like a Novocaine mouth. Then think about something you really want.” She likes to smize thinking about “pizza.” Her dream date is “Larry David! I have a crush on him. And he’s single.” TYRA AND L.D. TOGETHER? PLEASE MAKE THIS HAPPEN.

Misc/Etc: “He’s been pining for her for years!” “Hot mess alert!” “I trained muscles I didn’t even know existed” “short and chubby” “gets her fake bump jumped” “Fame has ruined my family” “cruel online attacks” “calling his wife a stripper” “a smooth talker who knows how to get what he wants” “lewd text messages” “He not only demanded her passwords, but he read her whole diary” “Will Smith’s snobby but lovable cousin Carlton Banks” “Reunited and miserable” “they kept their love affair private but secretly couldn’t keep their hands off each other” “He’s embarrassed they’re back together.” “She’s stubborn and won’t let anyone help her” “He was my drug” “the dad of two looked disgusting” “my husband fixed my boobs” “She’s gotten her big booty wish!” “A pot-bellied porker with an eye for fashion”

Katy Perry & John Mayer: Yes, this is still happening. “She’s playing hard to get.” And it’s working, apparently. “The pop star, 28, who’s casually dating John Mayer, 35, believes she can change him.” Good luck, lady. “She recently told John she was open to see other people. And her plot has paid off. Once Katy turned her back on him, he started chasing her again!” They met up in New York at an event and “kissed throughout the night.” He came to her concert the next night, and then they went on a double date at Perla. “He was really animated at dinner. He smiled at her a lot.”

Sting: “Any orgasm … I can have longer” SHUT UP, STING.

Madonna & Sean Penn: “Madonna and Sean Penn are still hung up on each other.” He may have beat the shit out of her while they were married in the ’80s, but the former paramours somehow remain good friends. “The single actor, 52, was transfixed by his former love, 54, as he stood front-row with a friend at her MDNA concert. Their chemistry was off the charts. Madonna seemed to be performing entirely for Sean. And he was saying things like “Amazing!” and “She’s so hot!” And “Aloha, Mr. Hand.” The pair once known as “the Poison Penns for their constant fighting during their 1985-1989 marriage — have been spotted together.” They get together for the occasional dinner and keep in touch via text. Penn supposedly texted Madge from the set of Milk to tell her that he’d gotten past his youthful homophobia and was now sucking face with James Franco on-camera. “They’ve remained close friends, but they are fire and ice together romantically. She can only be with someone she can control.” Ditto for Sean Penn, I imagine. Plus Madonna is still dating 26-year-old Brahim Zaibat and Sean Penn is known to bang lingerie models and young actresses. But she did say in Truth or Dare that Penn was her greatest love, even though he beat her with a baseball bat and once forced her head in an oven. “Madonna’s friends wish she’d get back with Sean. He will always be the love of her life.”

Ben Affleck on Matt Damon: “We see each other almost too often. I wonder if his wife is thinking, ‘Is he really going to come over every night?'”

Hayden Panettiere on Connie Britton: “I geek out to her! I’ve watched every episode of her work on Friday Night Lights and American Horror Story.” Forget about Matt and Ben, Hayden and Connie are my new favorite show-business friendship.

Mila Kunis: “I think that the second you think that you’re funny is when you stop being funny.”

Elisabeth Moss on Peggy & Don: Her favorite aspect of Peggy is “her friendship with Don. There’s no romance, yet she knows him better than anyone.” She thinks the lack of intercourse is “why it’s interesting. On a lot of shows, they probably would have slept together around season 2!”

Misc/Etc: “She is always a delight” “The look of youthful elegance” “She’s the American dream girl” “in his Cincinnati Bengals onesie” “trying things, my sexuality, those things” “From beefcake to skin and bones!” “He has to die” “a film student stalked by a fencing mask-clad psycho” “yummy werewolf chow” “I slept on lawn furniture when I first moved to Los Angeles” “The train went off the track” “wild Las Vegas fleshfest” “Tom Cruise dining with Usher and Ridley Scott” “He’s allowing himself to be happy dating” “the importance of a revealing tweet” “bonding with her cats” “She flirts with other guys to help her ego” “He’s been texting old girlfriends” “keep the sham relationship going” “his bride-to-be was needy and selfish” “Moss was everywhere, even on the microphone!” ” You are so 1990!” “LSD! Free love!”

Rebel Wilson Is the Adult Honey Boo Boo: “My family is the Australian version of Honey Boo Boo! My parents are in the dog show business which is not at all glamorous. We’re quite a feral family. One time, we bought a house because it came with a free donkey.” Rebel’s three siblings are named Ryot, Liberty, and Annachi.

Ashton Kutcher & Mila Kunis: “Ashton has been with tons of models, and that’s the body type he likes. He had been dropping subtle hints, but she wasn’t getting it, so he just told her flat out that she’s too fat. They had a huge battle and Mila told him to leave if he has a problem with her weight.” DUMP HIM RIGHT NOW, MILA.

Kat Von D & Deadmau5: Tattoo artist Kat is dating DJ Joel Zimmerman, better known as Deadmau5. “He’s a genius in every sense of the word — not just musically. I fell in love with his brain.” Kat is “head over heels — she dotes on the electronic artist, preparing him macrobiotic meals at home and appearing on the red carpet with her hands all over him.” Here are some other people Katherine Von Drachenberg has dated: Jesse James, Nikki Sixx, and Steve-O. Given that track record, it feels fairly safe to say that Deadmau5 is a serious upgrade.

J.Lo Sporting a Rock for Publicity: “In Hollywood, J. Lo’s ploy is called a staged engagement, which may or may not be followed by a staged wedding.” Is this where Ben Affleck got the idea for Argo? The love between the couple can be entirely real, but so is the desire to stay in the spotlight. Image and career are everything for Jennifer. She is getting engaged to make magazine covers.” Ben and J.Lo still talk, by the way, according to Ben. He recently said “I touch base. I respect her. I like her.” Is a possible Bennifer reunion coming our way soon?

Misc/Etc: “I’ll be book!” “(not to mention her flaming hair)” “a red carpet camera hog!” “NOT EXACTLY BFFs” “Celeb brides shouldn’t let designers bully them” “gave her a touch of the quadra-boobs” “These guys look good going gray” “even though he left her and isn’t coming back” “if you can’t rebound with Dylan McKay, who can you rebound with?” “His marriage is in tatters” “He picked the color for her hands and feet” “She just stared into space.” “at least it’s just your underarms that need Botox, not your face!” “total bros in real life” “It’s ugly and tiring and violent” “dance herself thin and attract Mr. Right!” “She picked the wild brother” “Men do not respond well to demands” “high on cocaine as they fought in a limo” “It’s a very supportive group of maniacs” “Wrestling dads!” “We are a bunch of lunatics” “Prostitots look like streetwalkers but are 9 or 10” “shirtless, often pantsless”

Misc/Etc: “Keeps it looking girly” “no one is talking her out of it” “accentuated the posterior” “THE BOSTON BOYS ARE BACK!” “an expensive version of brass knuckles” “Just another boring married lady” “sexiest in sweats” “beefed up on pasta” “She gets constant human attention” “you ruin people” “Planning a wedding just sounds like a nightmare to me right now” “If he found out about the other guys she’s hooked up with, he would never be able to get over it” “a sullen antisocial mope skulking around in a hoodie” “always in the power position in the relationship” “Pimps don’t fall in love” “the hardness of this situation” “make him swaggy” “I will now use this as an excuse to celebrate by eating more croissants”