Thor, You’ll Be a Woman Soon 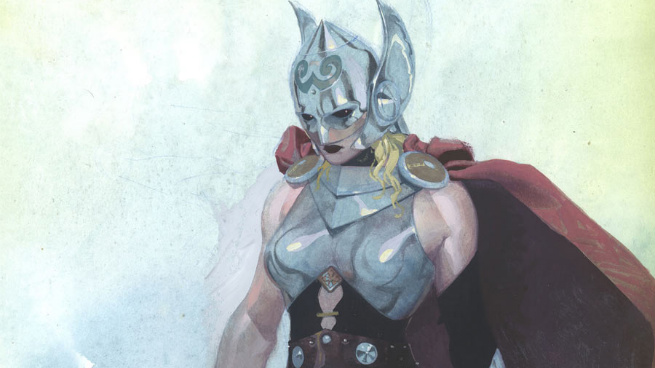 Yesterday on The View, Marvel Comics made a surprise visit to announce that its next Thor title will feature a female Thor for the first time in the comic book’s history. The present titular character will be banished to a new title called Unworthy Thor after proving himself no longer deserving of the legendary Mjölnir hammer, which will be wielded instead by a blonde lady who will become the new official Thor. Marvel wants the audience to know it is not playing around here: “The new Thor continues Marvel’s proud tradition of strong female characters like Captain Marvel, Storm, Black Widow and more. And this new Thor isn’t a temporary female substitute — she’s now the one and only Thor, and she is worthy!”

OK, slow your roll Marvel. Comic-Con is coming up next week. Why make this announcement on The View? It makes me worry that the company (which, like Grantland, is a Disney property) is giving us this news as a door prize before we find out at Comic-Con that there are still no immediate plans to make any female stand-alone superhero movies. Movie Thor will of course still be played by the shirtless and sheened Chris Hemsworth. Maybe I’m skeptical because I’ve been burned so many times, but this attempt by Marvel to position itself as the more progressive of the big two franchises feels … a little bit cynical? Or maybe I’m just concerned that if the title bombs they’ll drop the whole idea of appealing to more female readers.

But perhaps I should give Marvel a chance at making a step in the right direction instead of nitpicking over the fact that the series will still be written and drawn by men. From the art released so far, it looks like the company is letting female Thor be muscular and wear the traditional armor instead of a metal bikini, so maybe its heart really is in the right place. She has to be muscular to wield Mjölnir! By making one of its biggest titles a female character, Marvel is openly daring male readers to consider that their favorite superhero could just as easily be a woman.

Maybe this is just the beginning of a new era for Marvel, and maybe it won’t be too long before we can have nice things like standalone movies for Black Widow, Ms. Marvel, Storm, Rogue, She-Hulk, and Jean Grey. I’m gonna just stay optimistic.

Seth MacFarlane Is Being Sued Over the Idea for 'Ted'

Small(er) Movie Roundup: 'Boyhood,' 'Deliver Us From Evil,' 'Life Itself,' and More